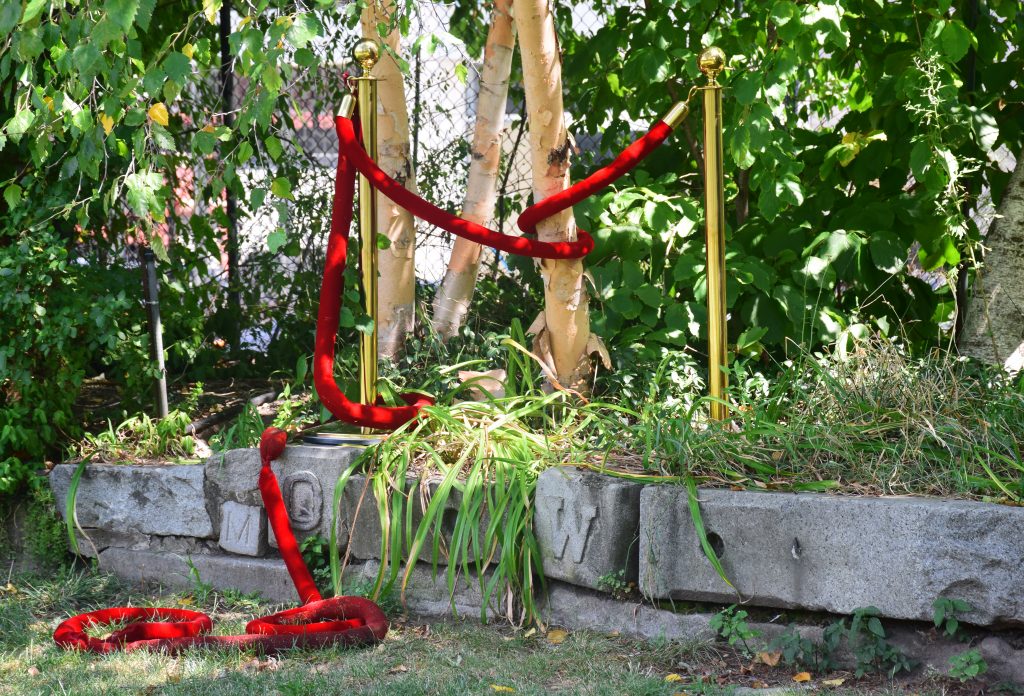 This year’s ‘Socrates Annual’ builds upon the Park’s 19 years of nurturing artists at early stages of their careers or seeking to expand their sculptural practices to the outdoor realm. Each 2019 Artist Fellow is awarded summertime access to our outdoor studio space, a production grant, artist honorarium, and inclusion in the culminating Socrates Annual exhibition.

‘The Socrates Annual Fellowship’ and its culminating show are dedicated to fostering individual artist projects that represent a diversity of approaches and continue to push the boundaries of what is expected of art in the public realm. There are several common threads woven throughout the 2019 exhibition: the intersection of botany and colonialism; the interiority of the body – as vessel, as repository, as shelter; and the monument or memorial to address underrepresented histories.

“This group of artists present diverse perspectives and approaches – both materially and conceptually – that challenges assumptions about public art and expands the dialogue about public space,” says Curator & Director of Exhibitions, Jess Wilcox.

“The Socrates Annual is critically important program at Socrates serving New York artists,” says Executive Director, John Hatfield, “For many participants, this is their first opportunity to create and exhibit large-scale public artwork – which has a career catalyzing effect. It is a privilege to be able to support artists in this way.”

‘The 2019 Socrates Annual’ opens on October 5th, 2019 – with a public celebration offered from 4-6pm. The festivities will include a short dance performance programmed by artist Alva Mooses for her piece, ‘Se entra bailando.’ Performed by Sandra Soto, the dance is based on the ‘Danza de los Viejitos’ (Dance of the Little Old Men) from the Purépecha region in Mexico and highlights how indigenous groups preserve pre-Hispanic beliefs and traditions through syncretic culture.

Artist projects featured in the 2019 Socrates Annual are:

‘I Still Remember You Mijo (Votive Vela)’ by Jesus Benavente

In response to the recent and ongoing targeting of Latinx communities in the United States, Jesus Benavente has produced ‘I Still Remember You Mijo (Votive Vela).’ From one perspective the work spells out this mournful sentiment in florid type bracketed by wings, while from other angles the piece is abstract. Topped with thermochromic paint that changes color with temperature the piece is evocative of votive candles often lit for lost loved ones.

Tecumseh Ceaser (NativeTec)‘s homage to the original inhabitants of the territory that encompasses Queens, Long Island and Brooklyn is titled ‘Honoring the People of Sewanhaky,’ which translates to the island of black shells. The concrete and wampum sculpture depicts a sea turtle with thirteen facets on its shell, representing the indigenous groups of the region at the time of European colonization, and references the creation story that North America emerged from a turtle’s back.

In ‘Chromakey Supranational,’ Martina Oneymaechi Crouch-Anyarogbu (MOCA) deconstructs nationalist imagery and symbolism through a series of newly composed flags for nation states with a legacy of Colonialism printed in wax-resist dye technique. This style, most closely associated with post-Independence commemorative cloths of East and West Africa, harbors its own Colonial history, as a product of the Dutch adaptation of Indonesian batik textile craft to a product for machine manufacture. The flags are paired with plaques baring museum-like formulaic interpretive descriptions further interrogating national narrative-building institutions.

Native Bur Oak, Eastern Redbud, Pagoda Dogwood, Sweet Gum and Witch Hazel trees accompany jumbo-size seed replicas in Rachelle Dang’s ‘Seed Box: Trees of New York.’ Based on 18th-century containers for horticultural samples sent across the globe and emblematic of Enlightenment thinking, the box incorporates the imagery of European botanical textile prints of the same era. Situated in the Socrates landscape the piece highlights the interweaving of colonialism, art and botany in the contemporary landscape.

Chris Domenick’s ‘Archipelago (Dock)’ is a mixed-style kitchen island informed by the architectural mash-up of Queens and engaged with the concept of public sculpture as a meeting place and site of exchange. Part of a series of isolated sculptures installed throughout New York City, the work challenges Modernist and contemporary ideological conceptions of autonomy, use-value, and leisure.

‘The Blind Man’ by Hadi Fallahpisheh

‘The Blind Man’ – Hadi Fallahpisheh’s glazed ceramic urn – elides figuration and abstraction in the artist’s expression of the gap between public and subjective perception of identity. Reminiscent of a life-size body kneeling, the vessel wears an unmistakable cowboy hat, iconic of a particular American identity. While the form invites narrative, the figure’s humble stance creates an air of enigma.

Jes Fan’s ‘what eye no see, no can do’ is an interlocking tube skeleton supporting a series of translucent amorphous fiberglass bulges. These organ-like forms transmute into orifices, thresholds of interior/exterior, abstracting the ambiguity of supposed binaries. With biological diagrams as one point of departure, the piece challenges conceptions of the body as a closed autonomous system.

‘THE BIG SLEEP’ by Hadrien Gérenton and Loup Sarion

Hadrien Gérenton and Loup Sarion’s ‘THE BIG SLEEP’ presents an incongruous apparition for a New York City park—an enormous blue nose emerging like a hill from the ground. A translucent pink lizard sits at the threshold of one of the nostrils with its head engulfed inside the orifice. Evocative of multi-layered meanings of myths, fairytales, and origin stories, the piece invites both playful musings and psychoanalytic interpretations.

‘Se entra bailando / You enter dancing’ by Alva Mooses is a gathering of cast concrete sandal forms in a bed of volcanic rock around a modular wood platform that invites the public to dance. The piece is inspired by the Purépecha ‘troje’—vernacular architecture that is nomadic by design and history of the Paricutín volcano in Michoacán, México. Born amidst a cornfield in 1943, the Paricutín volcano eruption forced the Purépecha residents of San Juan Parangaricutiro to relocate and left only fragments of the local church visible. The title is taken from the practice of entering the new church in San Juan Parangaricutiro dancing in order to realize prayers and dreams.

Marius Ritiu’s ‘Rock and Roll (Sisyphus – Part II)’ is a towering oblong hammered-copper rock sitting in a Costco shopping cart that the artist imagines as a meteorite fallen from interstellar space. Inspired by a surreal chance encounter with an outlying boulder on a street in Antwerp and its subsequent rescue by shopping-cart, the artist re-creates a similar scene at Socrates. Mottled with various glimmering patinas of blue-greens, pinks, and browns, the rock evinces an alchemical and otherworldly aura.

Martin Roth’s soundscape installed at various locations throughout the park asks visitors to reconsider the supposed binaries of human/animal, manmade/natural, and nature/culture. The composed audio plays the calls of animals, bird songs, frog croaks, and cricket chirps, among others, mimicking the sounds of human inventions such as the iPhone, air conditioning units, ship horns, and car alarms. Emanating from the trees within this waterfront urban park, the work produces an uncanny impression of the landscape of future the world.

For ‘Access Grove, Soft Stand,’ Gabriela Salazar weaves, drapes, and wraps velvet rope, the ubiquitous crowd controller and VIP separator, in Socrates’ central grove of trees. The red rope simultaneously blocks, guides, and perhaps confounds visitors, whose bodies are shaped by urbanism and architecture, while passing through this public space. Salazar’s contorting and winding of the rope combined with the wild plants sprouting from the porous textile undermine the authority of this dividing line.

‘Monument to Your Stinky Tree’ by Lucia Thomé

Lucia Thomé’s ‘Monument to Your Stinky Tree’ replicates the form of Isamu Noguchi’s 1980 “Spirit of the Lima Bean”, commissioned by an agriculturist who made his fortune from the forementioned legume, painted with a surface of Ailanthus Altissima foliage as camouflage. Disparagingly known as Stink Tree and Ghetto Palm, this invasive species originates from China and thrives in urban conditions, including the nearby site of the Noguchi Museum. By combining narratives of migration, transformation, and change, Thomé creates an homage to urban resilience.

‘Muscle Memory’ is a spiral sculpture of joined electrical conduit produced by the Workers Art Coalition (WAC), a group of construction workers and artists who bring representations and creative expressions of blue-collar workers into public culture. Composed through a series of workshops held at the Park, the work’s “distributed authorship” highlights the collaborative process while reversing the typical invisibility of the fabricator in contemporary art production. A sound element involving IBEW Local 3 union electricians will be added during the exhibition’s run.

‘The Socrates Annual’ 2019 exhibition is made possible, in part, with funding from the Jerome Foundation, the Milton & Sally Avery Arts Foundation, the National Endowment for the Arts, the Shelley & Donald Rubin Foundation, and the Devra Freelander Memorial Fund.

Since 1986 Socrates Sculpture Park has been a model of public art production, community activism, and socially inspired place-making. Known for fostering experimental and visionary artworks, the Park has exhibited more than 1,000 artists on its five waterfront acres, providing them financial and material resources and outdoor studio facilities to create large-scale artworks on site. Socrates is free and open to the public 365 days a year from 9am to sunset and is located at the intersection of Broadway and Vernon Boulevard in Long Island City, New York. socratessculpturepark.org / @socratespark