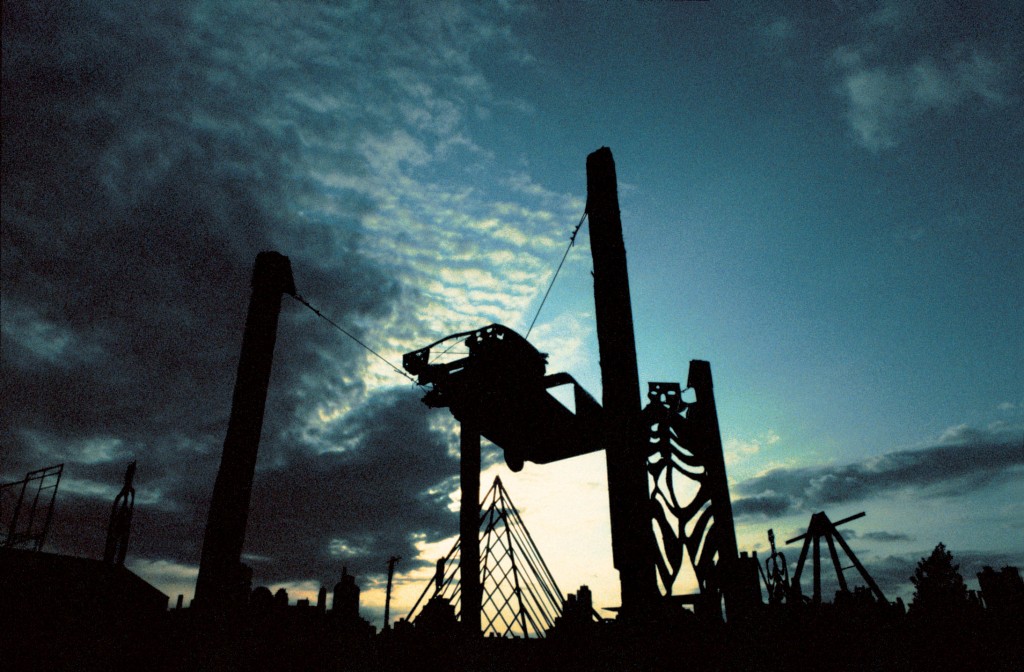 “Because thine heart is lifted up, and thou has said, I am a God, I sit in the seat of God, in the midst of the seas; yet thou art man, and not God, though thou set thine heart as the heart of God.” Ezekial Chapter 28 The inspiration for this sculptural work that I, with much help, managed to create during the summer months of 1991 at Socrates Sculpture Park, was first drawn and conceived during the years of the mid-1970s in Chicago. The imagery was taken directly from the Bible, from Ezekial 37 “Resurrection of dry bones, and the union of two sticks;” “And he said unto me, Son of man, can these bones live? And I answered, O Lord, thou knowest.” After many years had passed, these words and the imgery I had created based upon this thought and poignant moral and religious question, still clung to my mind, recently reawakened by the great moral philospher of our twentieth century american heritage in the tradition of his heros, Ralph Waldo Emerson and Henry David Thoreau, the great Lewis Mumford who wrote, “The Myth of the Machine — The Pentagon of Power.” This work, much like the biblical tale of the prohpet Ezekiel, concerns urgent moral questions pertaining to the minds of men as a creative and destructive force. It is also important to note that Lewis Mumford expressed concern for environmental and moral pollution in his writing as far back as 1922 when he first published his work, Utopias. I have dedicated this work to his memory, because I feel that his writing should be read by a larger public, accepting the recommendation of my dear friend, Joselyn Brodie, wife of the deceased painter, Gandi Brodie. The earth is the greatest architectural and sculptural entity the earth has ever known! A temple, a place of worship, a violent seizure of creative forces, a dynamic enterprise in possession of its own integrity, which is being itself. Which is perhaps a by-product of non-being, moving towards the urgency of consciousness. In this state of becoming and its awakening moments, morality is thrust upon its very core, which is the mind becoming soul, while trapped in the center of of our knowledge of death and oblivion. I also wish to acknowledge the physical and spiritual aid and guidance of my dear friends, and great sculptor, Mark di Suvero; the painter and architect, Kwan Lau; my wife Patricia; friend, Michele Fountain; Larry Tucker, Phil, Julius, Stan, Andy, Anthony, Stephanie, and Enrico. All of the individuals and employees of Socrates Sculpture Park, who have helped to make this city an important place to be and create, giving opportunity to many artists who would not ordinarily have the chance to experience themselves as a significnat creative entity within our society and are therefore deprived of our greatest gift that comes with consciousness, knowledge of ourselves.