Partly sunny and 73° in Queens

Partly sunny and 73° in Queens The background color of this website changes based on current sky conditions in New York City.

IK Studio is a young design practice based in Cambridge and Philadelphia that engages fields of material performance, spatial interaction, and robotics within architecture and urbanism. The practice was established by Mariana Ibañez and Simon Kim, and has presented work at MoMA, ICA, Opera Philadelphia, the Slought Foundation, and the Annenberg Centre.

Mariana Ibañez is an architect in Argentina, and Associate Professor at Harvard Graduate School of Design, where she is part of the Responsive Environments and Artifacts Lab, and is on the awards jury of the Boston Society of Architects and the MacDowell Colony. Mariana has a breadth of experience from Buenos Aires where she was principal of her own office, producing dynamic stage sets and multi-family homes. She then received her M.Arch. from the Architectural Association in London, before joining the offices of Arup Advanced Geometry Unit and Zaha Hadid. At IK Studio, Mariana continues her thesis interests from the Architectural Association in adaptable tectonics and rigorous design agency. As an academic and editor, Mariana’s research is in the disciplinary core of architecture and its growing periphery. Her recent publication by Actar D, Paradigms in Computing, is an inquiry into design agency and revitalizing its scope of work. Her theater work continues with the collaboration with Grace Kelly Jazz, The Dufala Brothers, and Opera Philadelphia, as well as exhibiting in the MoMA, Milan Fashion Week, and National Art Museum in Beijing.

Simon Kim is a registered architect in the state of California, an Assistant Professor at PennDesign, and director of the Immersive Kinematics research group. As principal at IK Studio, he is interested in the synthesis of architecture and urbanism to active and emotive behaviors with new media. As an academic and researcher, Simon has published numerous papers on robotics and multiagent interaction in IEEE, ICRA, AAMAS, and ACADIA. He has also led a workshop on reactive material at Smart Geometry. At MIT, he was a research fellow at the Design Lab. Beforehand, he was a designer at the offices of Zaha Hadid and Frank Gehry. As a designer and artist, Simon has been a producer and collaborator of several shows with artists, theater groups and performers such as The Dufala Brothers, Carbon Dance Theatre, Pig Iron Theatre and has produced and curated exhibitions at the Traction Gallery and the Slought Foundation. His work has also been exhibited at the ICA, MoMA, and Florence Film Festival Beyond Media. 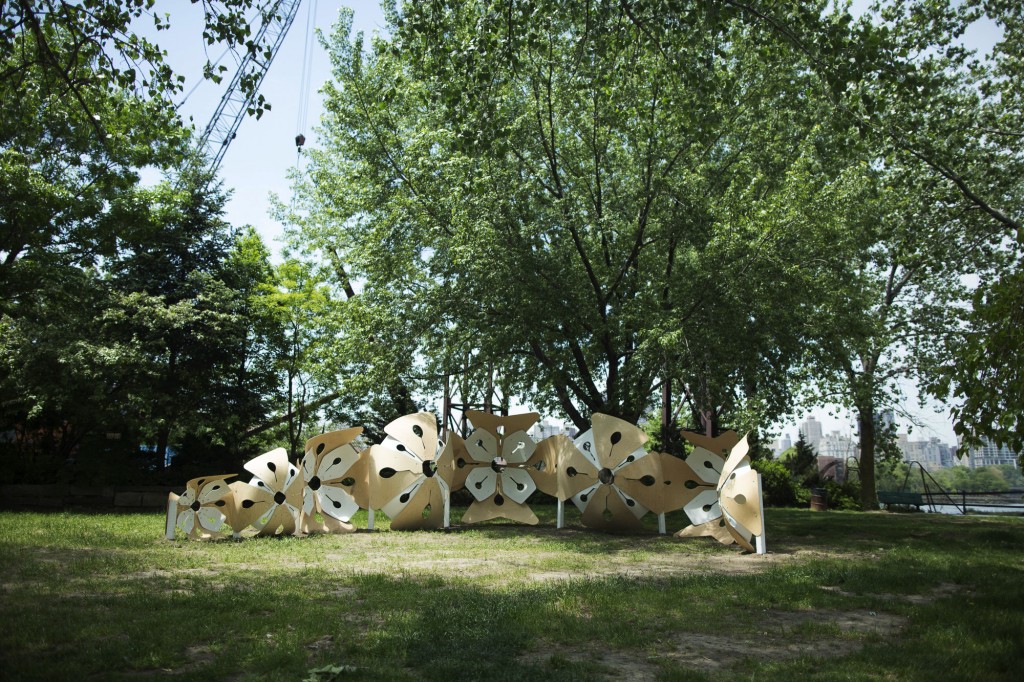 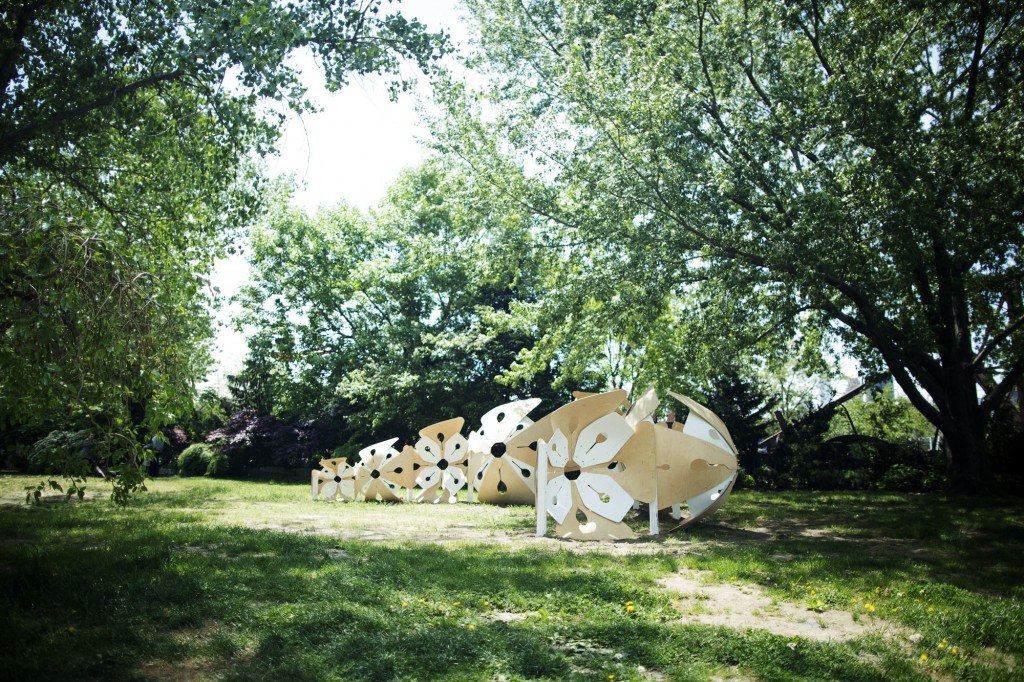 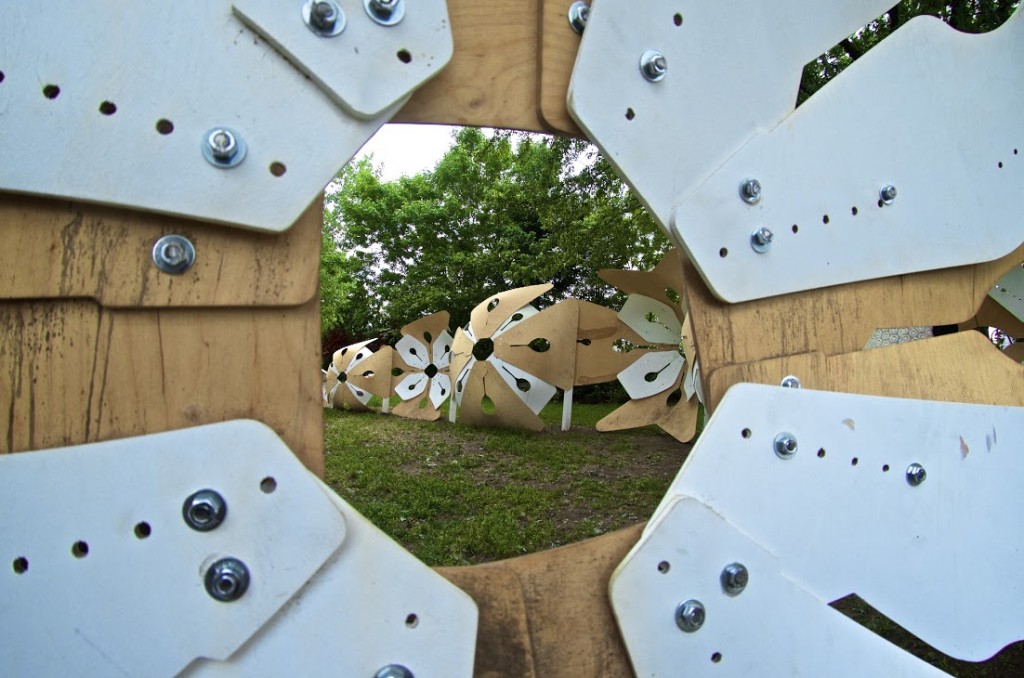 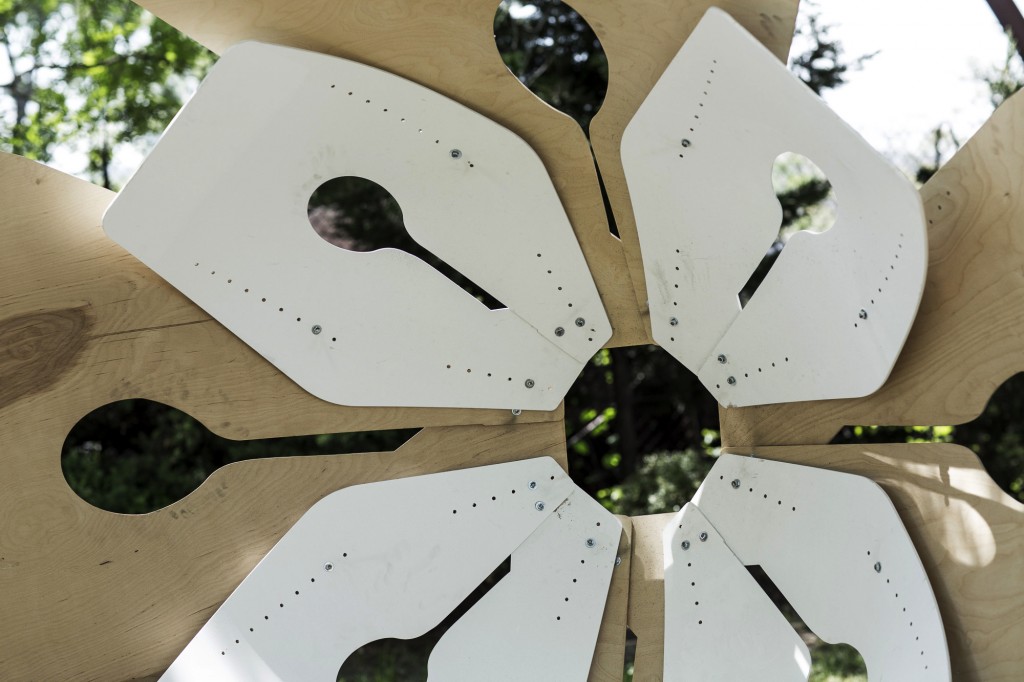 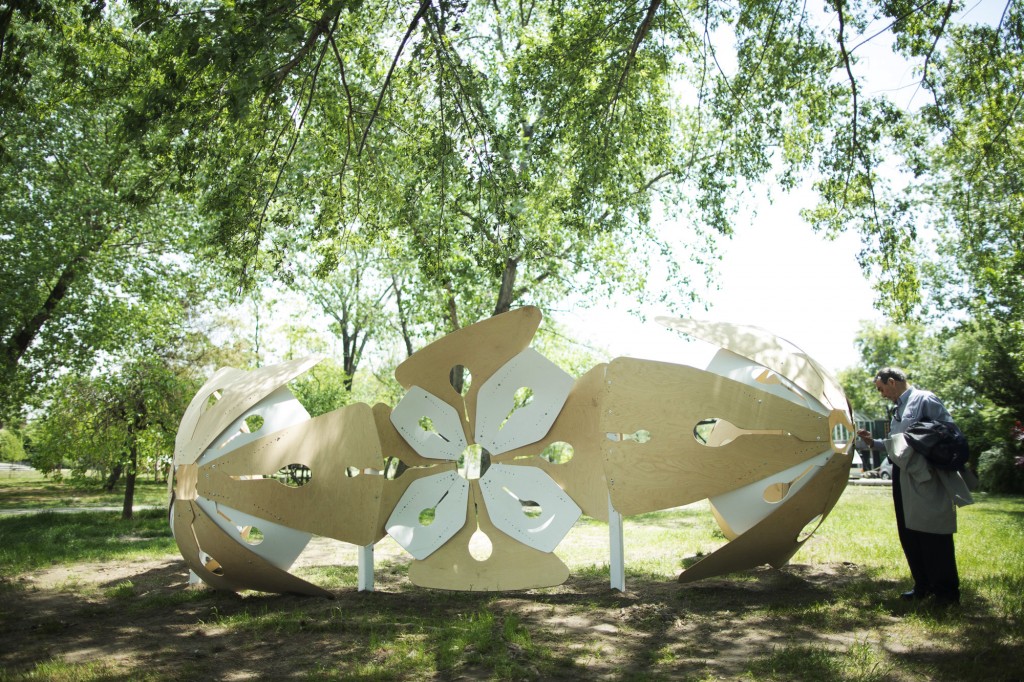 Socrates Sculpture Park and The Architectural League of New York are pleased to announce the winning proposal for the 2015 Folly Program—an annual juried competition targeted to early career architects and designers.

Torqueing Spheres combines a simple concept—a straight line—with complex spherical pods which become deep, self-supporting chambers to create experiences for both the collective and the individual. To construct the voluminous curves of Torqueing Spheres, IK Studio has implemented a material technique that uses a cost-effective method of bending plywood while maintaining a system of control and delivery. By blending folly formalism with innovative material techniques, IK Studio plays off of traditional architectural geometries to create new construction spaces that allow for exploration. (DOWNLOAD WINNING PROPOSAL)