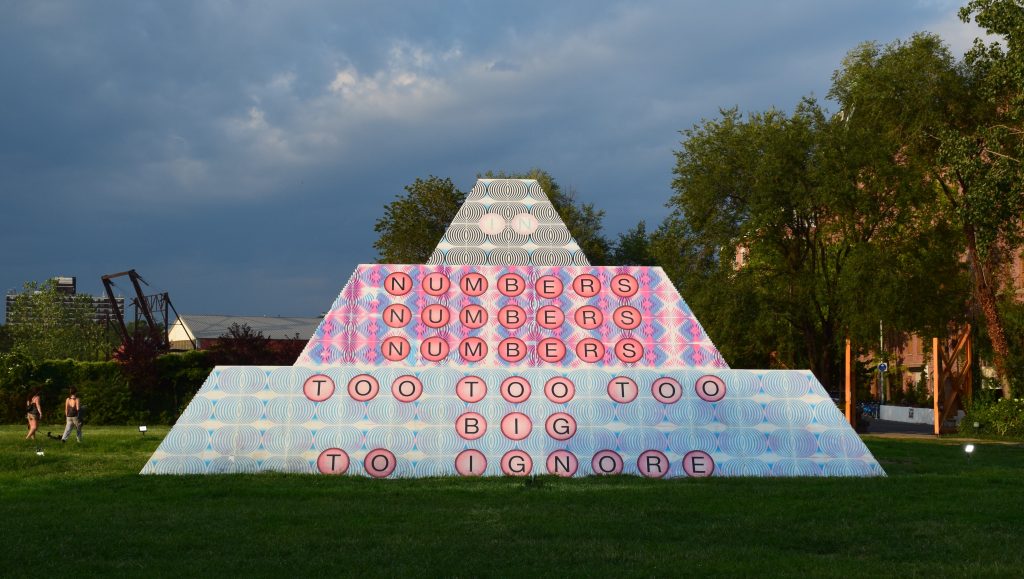 Jeffrey Gibson’s ‘Because Once You Enter My House It Becomes Our House’ serves as an homage to ingenuity of Indigenous North American peoples and cultures, to pre-Columbian Mississippian architecture, and to queer camp aesthetics. Gibson designed the multi-tiered structure to reference the earthen architecture of the ancient metropolis of Cahokia, which was the largest city of the North American Indigenous Mississippian people at its height in the thirteenth century. The earth mound of the pre-Columbian ziggurat is represented in Gibson’s multi-tiered monument with a plywood structure adorned with a vibrant surface of wheat-pasted posters. The posters integrate geometric designs inspired by the Serpent Mound located in Ohio, another monument of the Mississippi Valley, alongside texts that operate as activist slogans. Gibson also curated a series of Indigenous-led performances to activate the structure over the course of the ‘MONUMENTS NOW‘ exhibition.

Gibson invited three Indigenous creatives – Laura Ortman, Emily Johnson, and Raven Chacon – to activate ‘Because Once You Enter My House It Becomes Our House,’ with a series of performances released as part of a virtual screening series over the course of the ‘MONUMENTS NOW‘ exhibition.

Jeffrey Gibson and his project at the Park were photographed by Steven M. Contreras for the July 27th issue of The New Yorker magazine. See Image–>

Karen Rosenberg: The question of what to do about some of our monuments is very much in the news right now. But this is also an issue that’s been with us for a while, and shows such as the one at Socrates take a lot of planning. How and when did you come up with your monument, and how it has evolved?

Jeffrey Gibson: It was about a year ago when the show’s curator, Jess Wilcox, invited me to do the project. By the time there was a national movement to take down monuments, we were already well into confirmed plans for my piece. It had been sitting in my mind for some time to work with the architecture of a Mississippean culture mound. The idea of somehow activating the structure with performances was also there in the beginning.

KR: What were some of your formal and historical sources of inspiration? You’ve made references to the earth mounds of the ancient city of Cahokia, in what is now Illinois, and the pre-Columbian ziggurat.