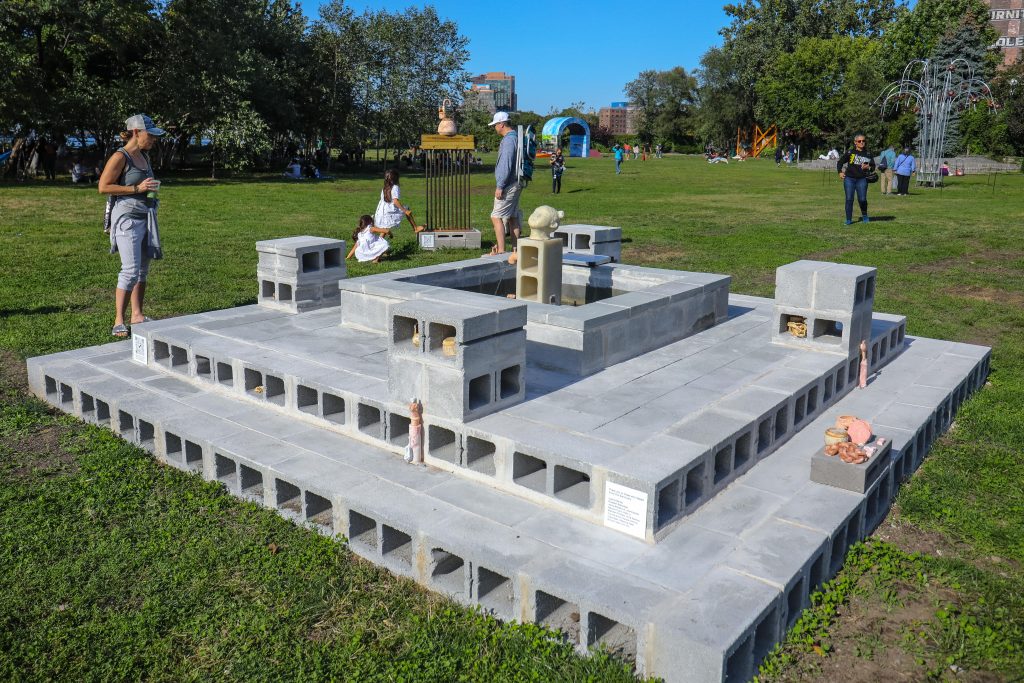 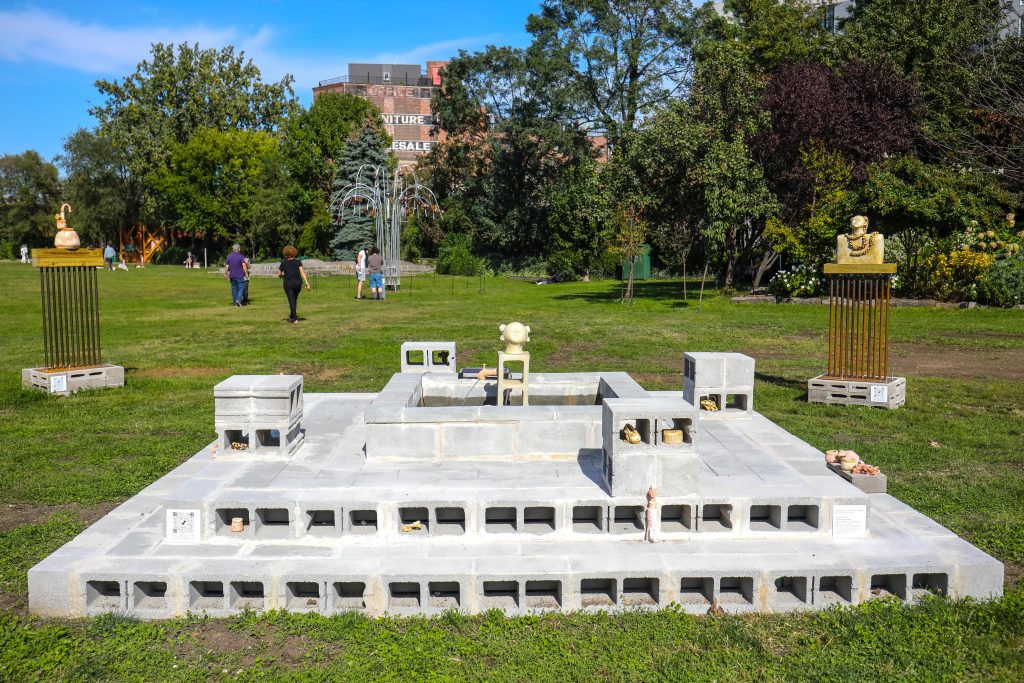 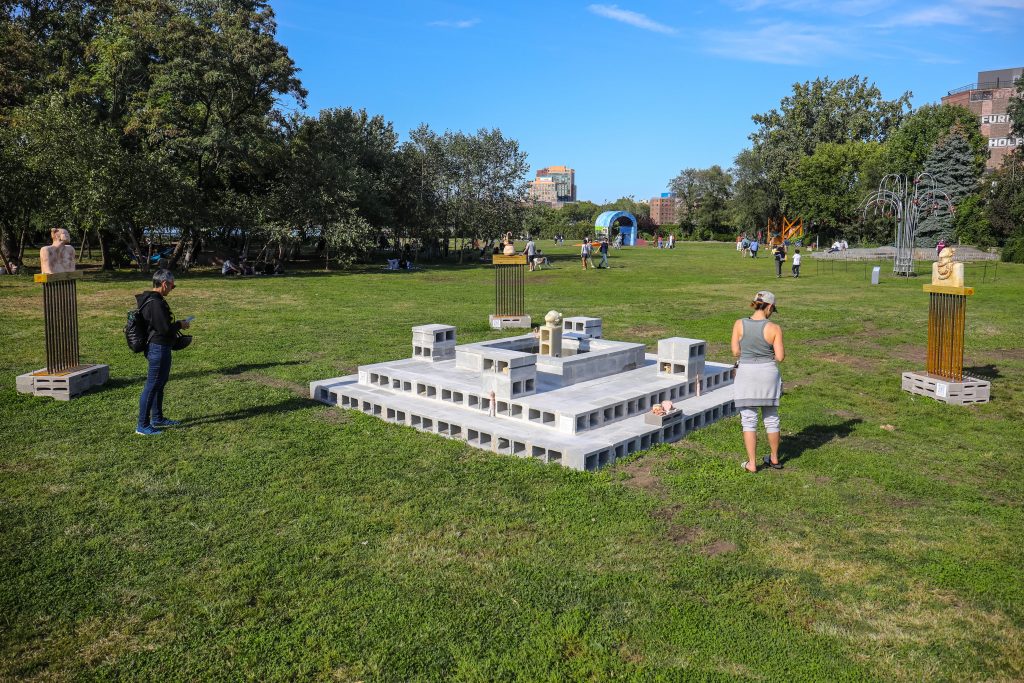 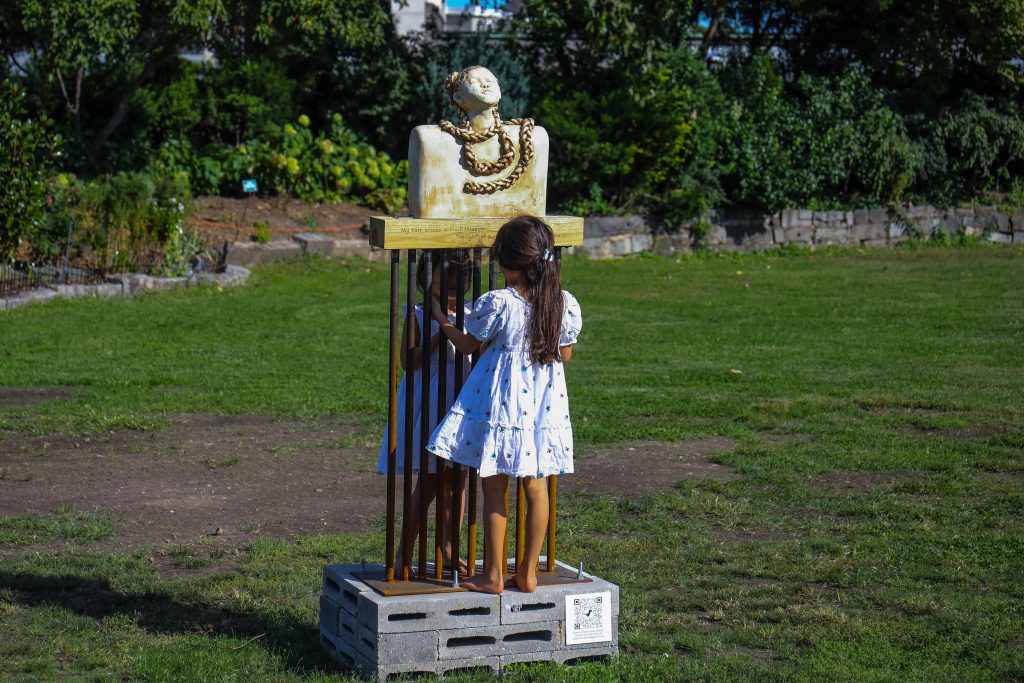 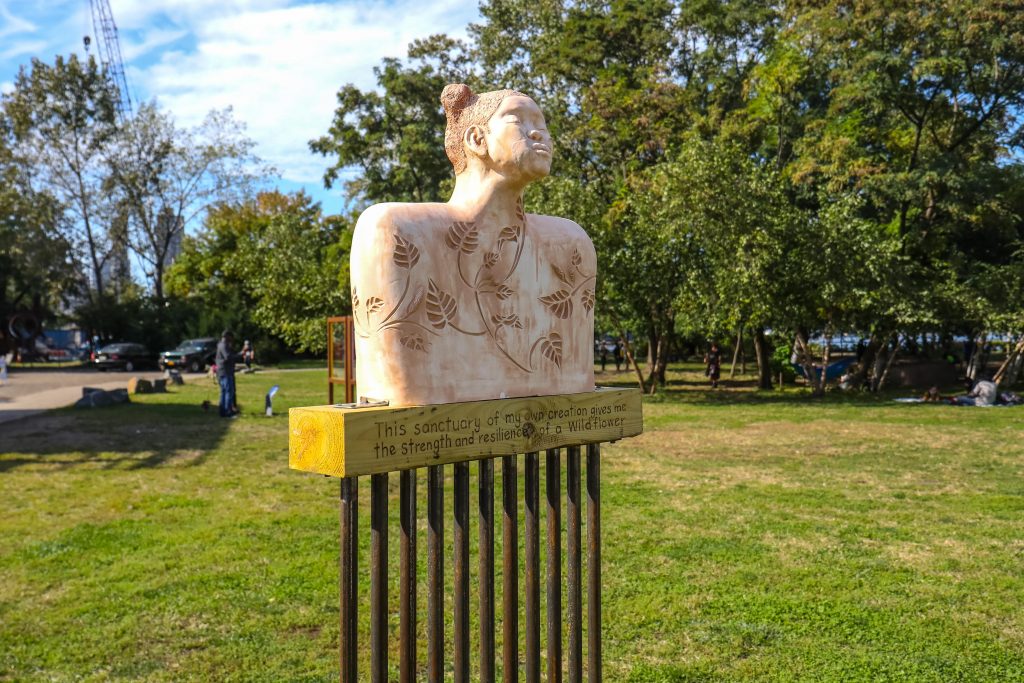 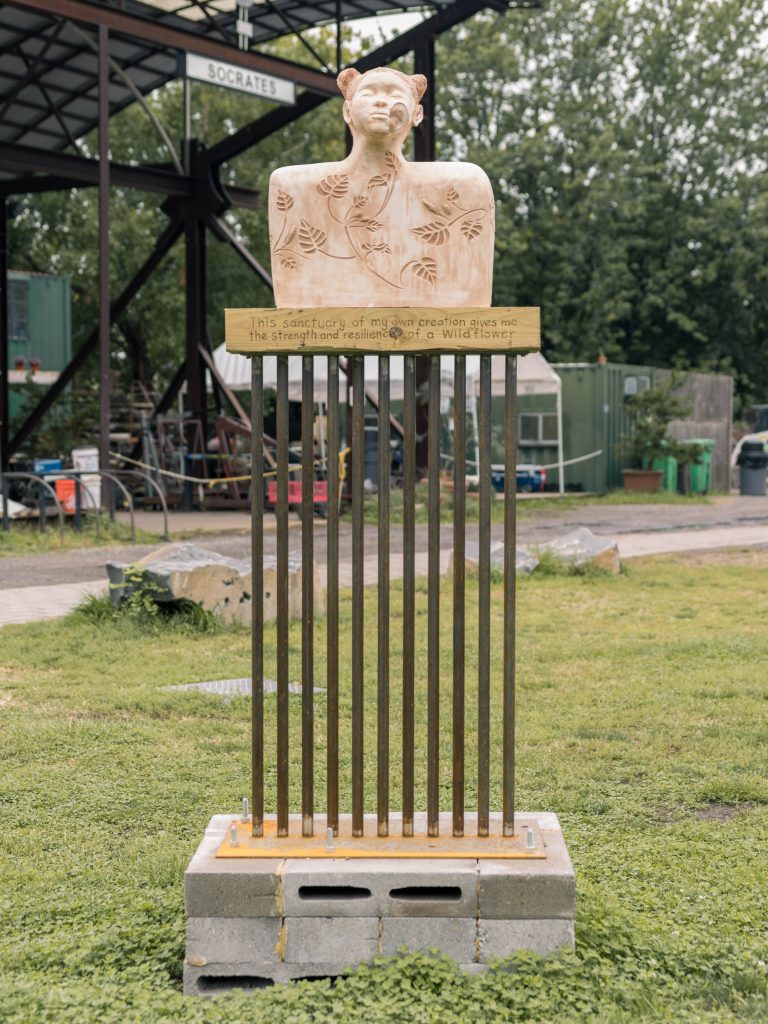 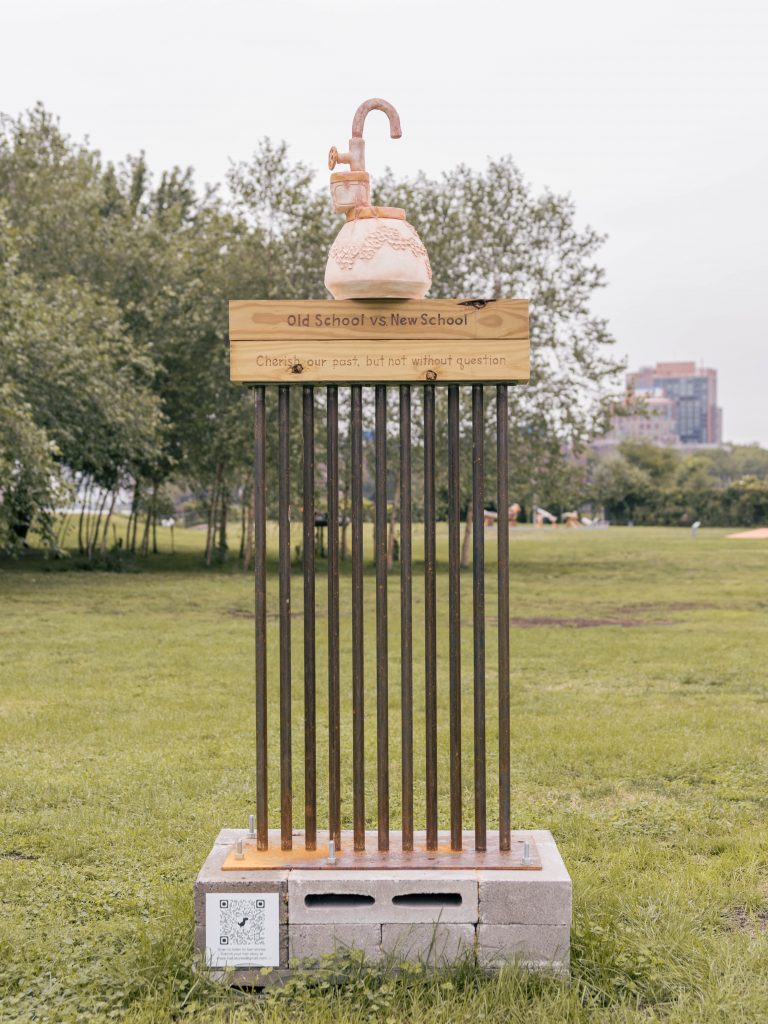 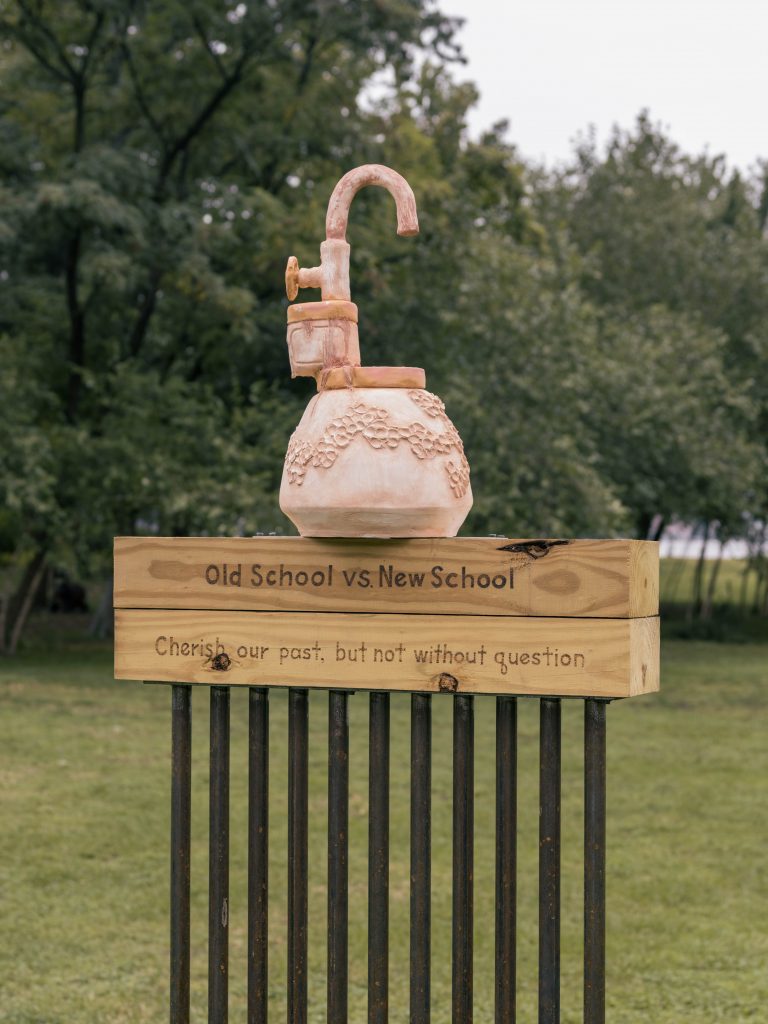 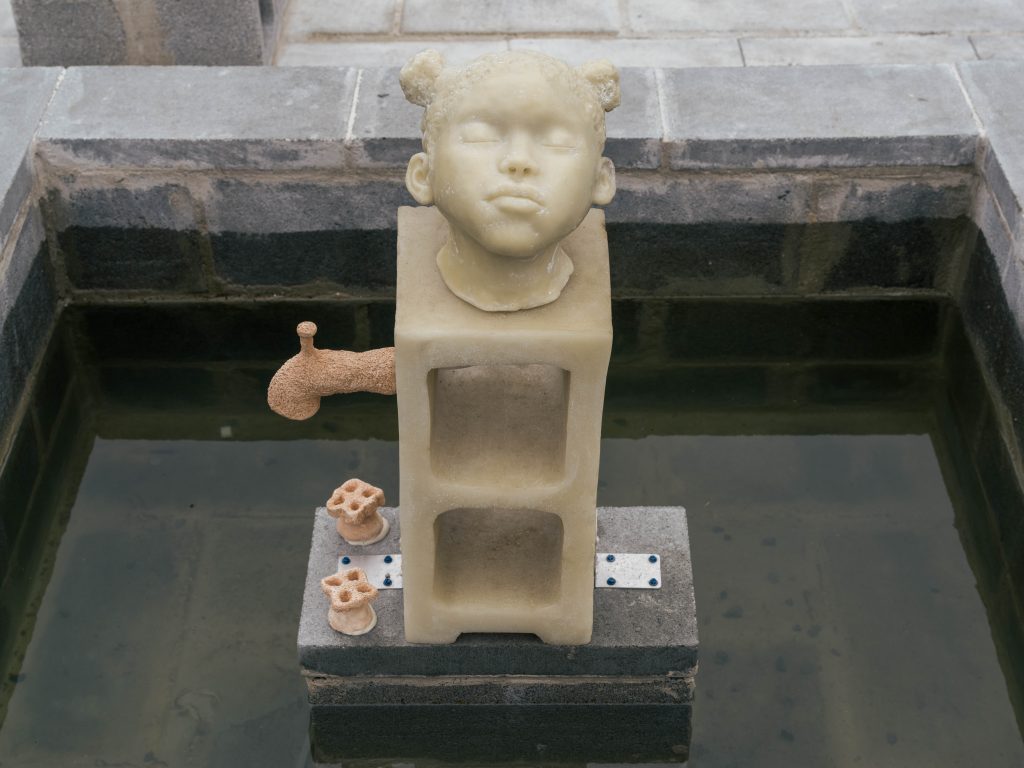 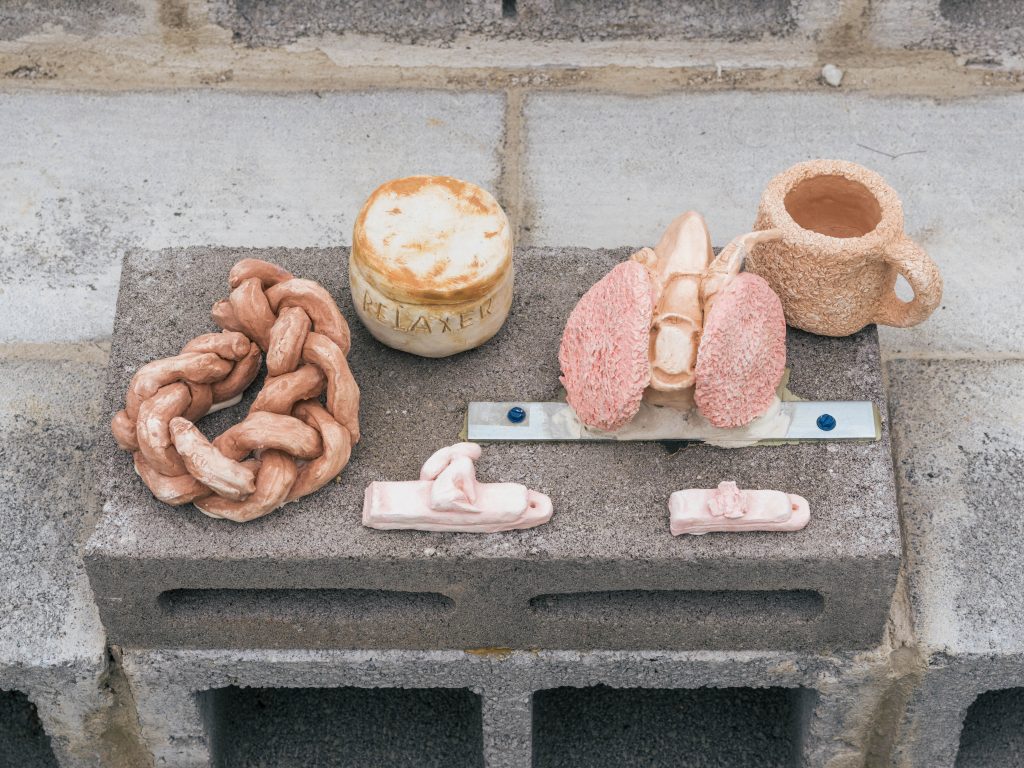 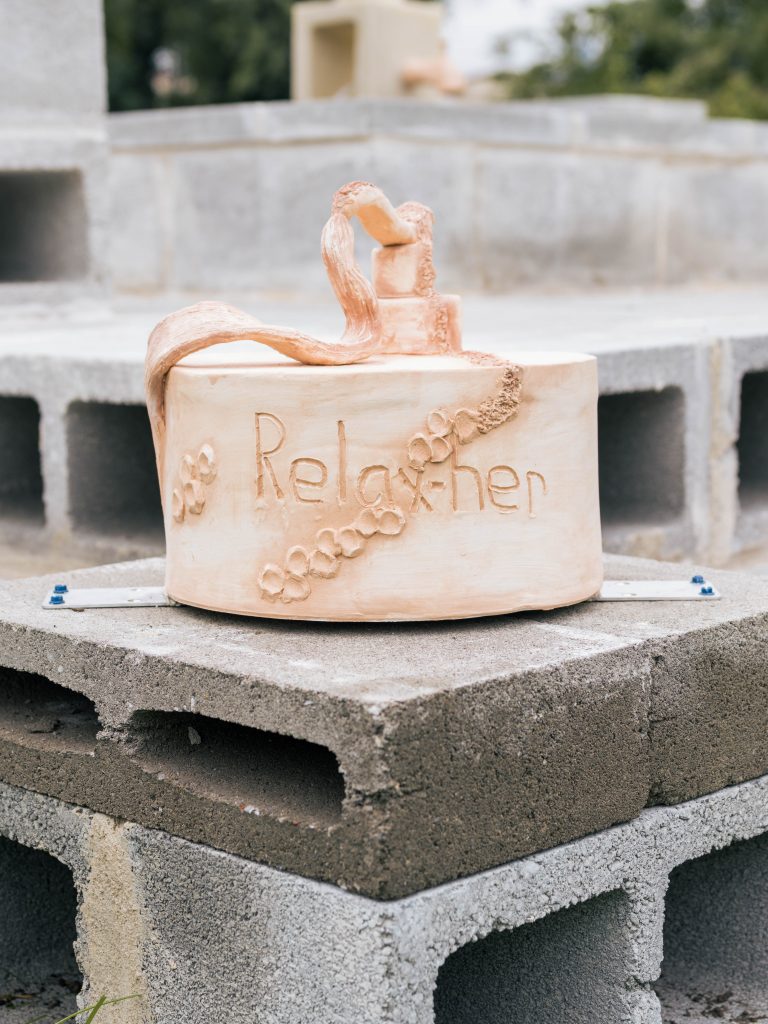 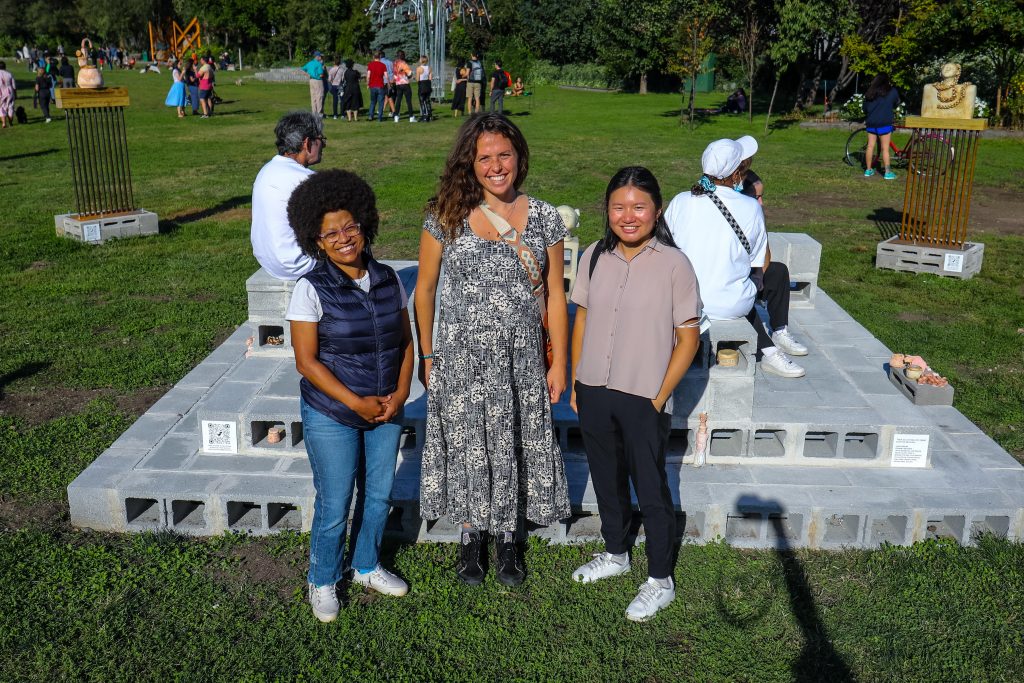 Built with commonly found cinder blocks around a water feature, African American Marbleization-An Act of Civil Disobedience: Hair Sanctuary provides a place for reflection and conversation. The installation’s use of fine porcelain clay elements elevates this personal and intimate subject matter to a cherished and hallowed realm.  The collaborative sculpture features hair picks and accompanying audio stories narrating a range of gendered and racialized experiences, many celebrating hair and hair care as a kind of sanctuary.

“There are three components to the series: objects, fragments, and architectural structure.

Fragments: These pieces are sculpted in clay then cast in marble dust.  The pieces are then chiseled away to have a fragmented look. The fragments are often installed in spaces where I experienced micro/macro aggressions.  The pieces are accompanied by a sign naming the aggression in hopes of educating the community and as a source of healing for myself.

Objects:  I research objects of my past then use my present to inform their structure.  Objects may include a grease pot with curl patterns, afro picks,  girls doing things specific to my culture, or other objects of the African diaspora that I’m interested in exploring.

Architectural Sculpture: Sol Lewitt sometimes used cement blocks and instruction sets in his work. These aspects have inspired my process. In addition, I am also exploring the physicality of the labor involved in the overall process. In communities of color these blocks often denote blight or decay. I’m interested in taking these objects and reimagining their possibilities in a collaborative way.  I investigate with architects, industrial designers, and other artists.”

Ms. Shortt is a social practice installation artist. The pieces she creates come from what she’s feeling living as an African American woman in her community. The pieces question privilege, disability, race, equality. Ultimately, she creates dialogue, and action

Ms. Shortt’s current series African American Marbleization: An Act of Civil Disobedience is about celebrating people of color, their culture, and the objects they use. The pieces are either fired in a kiln to create porcelain or cast in Marble Dust. Sometimes Ms. Shortt incorporates other materials such as wood or steel. The clay she uses is sometimes harvested from creeks in her community and fired in a pit. She’s interested in texture, tactility, and process.

My name is Jenna Boldebuck and I am an artist and designer living in New York City. Since I was a child I have been interested in how the built environment informs the patterns and rhythms of daily life. I moved a lot as a kid and in each place we lived I observed how my environment could have a profound impact on how I played, learned, and felt. I wanted to study this in school so I went to the University of Colorado to study Architecture. In school, I enjoyed building models and physically engaging with different materials. I loved repeating small tasks like cutting cardboard with an Exacto Knife and trying to improve my craft with each stroke. However the scale of architecture was too large for me. I wanted to connect with people more intimately through my design work.

After I graduated I furthered my studies at the School of the Art Institute of Chicago, where I studied Designed Objects. My work there centered around pattern and repetition. I wanted to design objects that embedded meaning into people’s daily rituals. I became very interested in how people learned and developed skills. I questioned the types of relationships people developed with tools and objects they used repeatedly. How did mastering the tools available in one’s environment make them feel more empowered? What role does the industrial designer have in giving people control over their built environment? To answer these questions I began studying early childhood development theories, becoming interested in loose parts theories, which study how inputting more variables into the built environment gives people(especially children) more control and autonomy.

When I left school, I continued developing my interest in learning environments through an internship at Argyle Design, a firm that specialized in exhibitions for children’s museums. Shortly after my internship, I began working with Guidecraft, a company that designs and manufactures toys and equipment for early childhood classrooms. I still work with Guidecraft, through my 7 years working there I developed 3 toys systems: IO Blocks, Block Science, and Coral Connections.  Each toy has a unique character but all of them are open ended, modular construction systems that invite children to create their own outcomes.

In NYC I also began collaborating with Yvonne Shortt. We have worked on numerous art and design projects in different communities throughout the city. One such project was Women Who Build, Artist who Own. We designed and built a mobile studio with over 200 volunteers. Together we learned basic construction skills and shared our new found skills with the community. Yvonne and I have continued collaborating and brainstorming different ways we can empower people through art and design.

In 2020, we began collaborating with Kelly Li, as we investigated how Cinder Blocks could transform urban spaces and house the sculptures Yvonne was creating in her “African Marbleization Series”. Cinder Blocks litter our urban environment. They are cheap open forms that are readily available, but because they are so common place their potential as a creative object is often overlooked. As we experiment with Cinder Blocks we hope to transform them into place makers in the urban environment, creating new paradigms of community space, and inspiring others to do they same.

Kelly Li is an architectural designer currently based in New York. Her recent work at 1100 Architect includes the development of a prototype for a Modular Comfort Station, a recipient of NYC’s Public Design Commission Excellence in Design Award. She is a 2021 Public Access Design Fellow at the Center for Urban Pedagogy and graduated with Bachelors in Architecture and Social & Political History from Carnegie Mellon University.

Kelly strives to work at the intersection of architecture, art, environment, and education. Beyond architecture, she has previously worked in freelance design for Spin350 Creative and evolveEA, taught K-12 arts education at the Carnegie Museum of Art and Gelfand Learning Center, dabbled in nonprofit work at Assemble Pittsburgh, and painted murals ranging from 200-4000 square feet throughout Massachusetts and New York. She has exhibited at the Miller Institute for Contemporary Art with her work titled “Water Imperatives: Reframing Systems for Viable Water Futures.” She began collaborating with Yvonne Shortt and Jenna Boldebuck in 2020 at the Elmhurst Sculpture Garden for the “African American Marbleization” series.

Click below to listen to the artist Yvonne Shortt speak about their work.