Sunny and 86° in Queens The background color of this website changes based on current sky conditions in New York City.

beginning is the end is the beginning 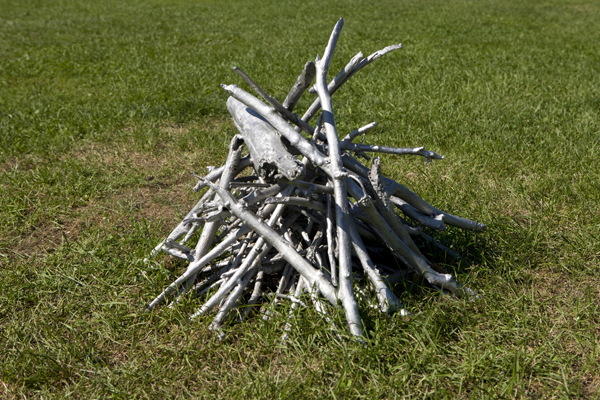 The sculpture is a realistic representation of a campfire. It is a place around which people will gather and around which stories may be told. Cast aluminium sticks and logs are composed in an ordered pile, roughly smallest to largest reaching roughly 2 feet tall. The sculpture is intended to create an unadulterated, primal connotation of gathering and foraging with an allusion to fire building./ Fire has been an important part of human culture since the Lower Paleolithic time. The earliest known traces of controlled fire were found at Gesher Benot Ya‘aqov, Israel and dated to an age of 790,000 years. The use of fire brought us out of darkness and marked the very beginnings of human civilisation. It was our very first attempt to harness the forces of nature. From the dawn of time fire has been the nexus of human activities and human interaction./ While the campfire evokes thoughts of warmth, celebration or story telling, fire also has more dark and sinister connotations, provoking sentiments of destruction, fear./ It is the ability for this object to create multiple association and to thereby transcend signification that interests me. By avoiding a singular meaning or a fixed logic, it is also possible that the sculpture presents itself as formal abstraction – an arrangement of sticks and wood as lines and shapes./ To experience the sculpture is to enter an ontological paradox. It first may present itself as an unlit campfire. But the production of the sculpture has involved burn casting the pieces of wood. It is therefore a broken monument constructed through the processes implied by what is represented by its own formal arrangement. In other words, fire will be used to create this representation of firewood before being burnt. The final form, the image and shape of the bonfire, acknowledges the processes of its own formation, but the material shift denies the potential of the process suggested by its arrangement – Aluminium is a metal that cannot produce a spark. I am interested in this space of entropy between contradictions. The sculpture will be both a prologue and epilogue about fire – with the essential active element of light as fire as alchemy having passed through the sculpture already.