Mostly clear and 58° in Queens

Mostly clear and 58° in Queens The background color of this website changes based on current sky conditions in New York City. 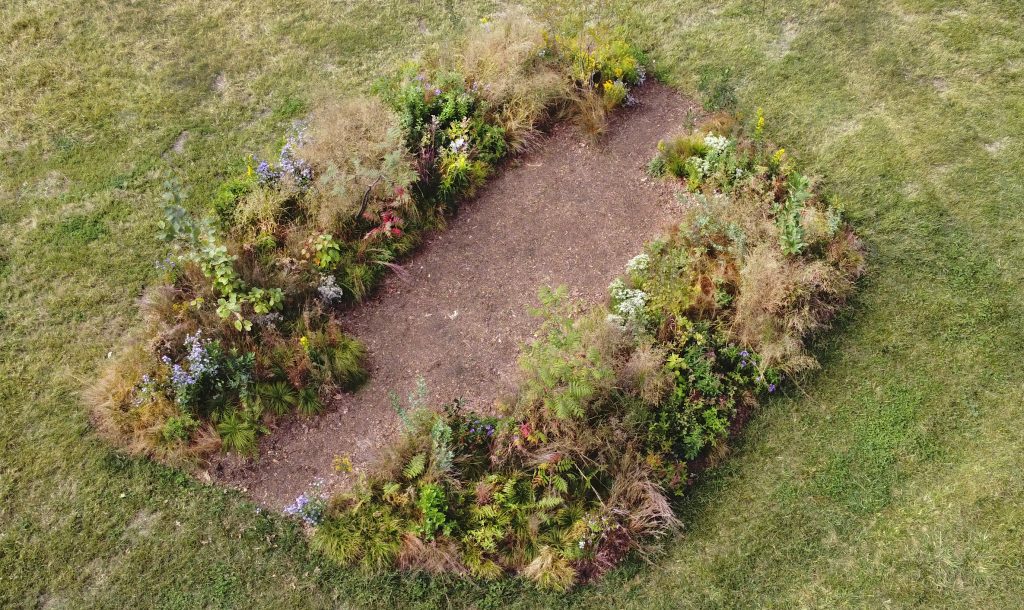 An empty center holds space for the contemplation of history’s relationship to current conflicts in this garden, which is rendered to match the dimensions of decorative plantings surrounding the Robert E. Lee monument in Charlottesville, VA – the site of the infamously violent Unite the Right rally in 2017. Costello replaces Classical-style low hedges, English boxwoods, Japanese hollies and peonies – all associated with the United States’ colonial slavery-fueled economy – with plant species native to the region surrounding Socrates for centuries before European colonization.

Thank You: Ben Simon, Evelyn Manlove, Pawel Pieluszynski, and Glover Perennials for their contributions to this project.

Hello! I’m Patrick Costello,and I’m talking about my work, Ceding Ground. In 2017, white supremacists descended upon my hometown of Charlottesville, Virginia, emboldened by the presidential administration and incensed by a proposal to remove the city’s Robert E. Lee monument. They murdered Heather Heyer, brutally assaulted DeAndre Harris, and terrorized antiracist protestors, including many of my loved ones. The events sparked renewed conversations about the roles and meanings of Confederate monuments all over the country. In response, the city of Charlottesville erected a barricade of orange construction fencing to protect the statue and its surrounding gardens, ensuring the site’s preservation while legal battles determine its fate. My piece echoes and replaces the dimensions of Charlottesville’s fenced-in territory in an effort to transform that contested space. I’ve removed both the perimeter fence and the statue at its center, leaving garden beds surrounding an unoccupied rectangle of bare earth. Making that central void accessible invites viewers to come in and repopulate the position of the erstwhile statue, shifting our perspective from gazing up at a bronze figure to looking out, around, and down at the ground. Tending this garden in New York City, provides me with a regular physical practice that helps reconcile the spiritual distance between where I’m from and where I currently reside. And as this year’s massive uprisings continue to illustrate, the two cities are more alike than their relative locations belie. White supremacy and racist systems of policing, incarceration, and housing continue to wreak havoc in both places, and indeed, all over the country. Monuments reinforce these power structures and uphold many long-held formal conventions, too — from their bronze sculptures to the designed landscapes that surround their pedestals. Following suit, Charlottesville’s Lee monument is flanked by highly-manicured gardens of English boxwoods, Japanese hollies, and peonies — plants initially found only overseas and introduced to this continent as a direct result of colonial economies. Interrupting that lineage, Ceding Ground references the historical ecologies of its specific site, overflowing with a collection of flora that grew within one hundred miles of what is now Socrates Sculpture Park for generations prior to the initial arrival of my European ancestors to this land. These plant species remind us of a time before white supremacy sculpted our collective consciousness and our expectations of public space. I look to these plants as part of my practice of ecological horticulture and habitat co-creation, enabling more breath, proposing an alternative to bronze figures and orange fences. In surrounding a space of absence with these specific plant communities, I am deliberately collapsing these ecologies across time and geography, in the hopes that doing so may help reshape our presence within potential landscapes to come.

Costello participated in a series of virtual programs produced by the 2020 Socrates Artist Fellows: