Mostly sunny and 19° in Queens

Mostly sunny and 19° in Queens The background color of this website changes based on current sky conditions in New York City. 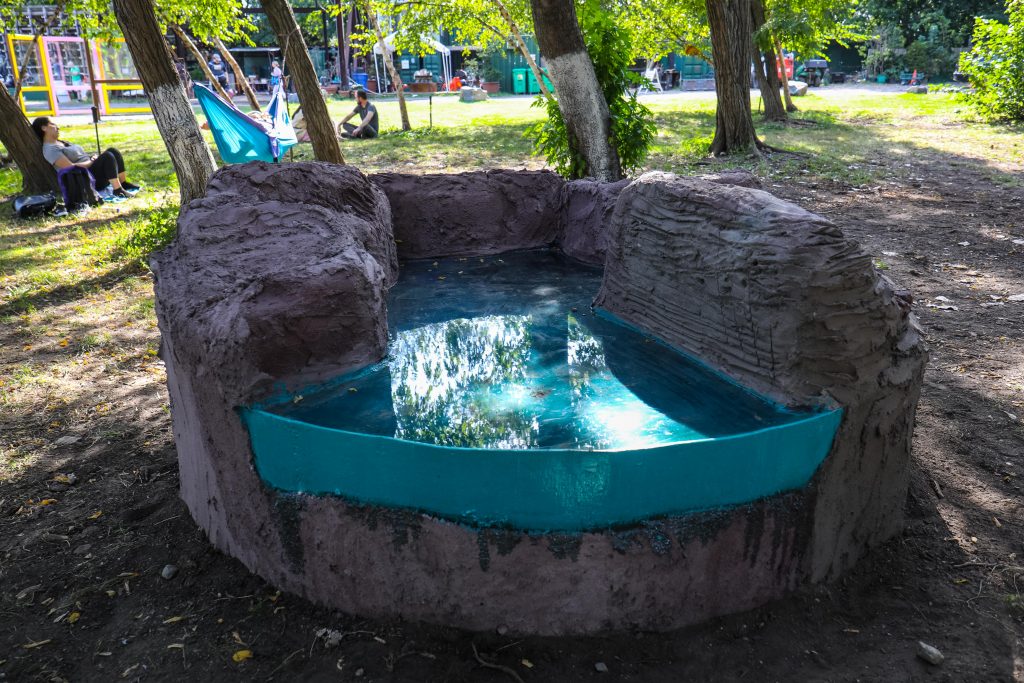 Cenotes are natural sinkholes of exposed groundwater made after the collapse of bedrock, most associated with the Yucatán Peninsula in Mexico and the spiritual practices of the ancient Maya. With her sculpture Cueva | Cenote, Torres brings this geological site to Socrates, presenting a cave-like environment visitors can immerse themselves in. The colors of the sculpture change depending on the time of day and position of the sun, that casts moving reflections of the sky, sun, clouds, and trees, upon the piece.

The bottom of the trees surrounding the sculpture are painted white by the artist to represent the sacred Ceiba tree found in Puerto Rico, Mexico, and Peru.

The public is invited to interact with and step into this sculpture.

Born in Staten Island, NY and moved to a suburb of New Jersey at the age of four, Torres was raised in the patriotic culture of a post- Industrial town.

By the time she was 21, Torres had marched with Indigenous rights activist Dennis Banks at the Lincoln Memorial, modeled in the viral campaign with “The Colored Girl” to promote diversity in the beauty industry, and conducted economic research on trade policy with the United States Department of Agriculture. She is the recipient of The 2015 Zulima V. Farber Award, the 2016 Clement A. Price Human Dignity Award, and 2021 New Jersey Council on the Arts Individual Fellowship Award.

In recent years Torres has continued to refine her performance arts technique. In 2020 she was a Fellow in the Emerge NYC program, an “incubator for emerging artists working at the intersection of performance art and politics.” She is an aspiring actress and made her debut in a brief appearance in Season 2, Episode 3 of The Politician on Netflix. She was depicted as a Native American protestor, coming full circle from her experiences as a student organizer.

Being an eco-feminist artist of Caribbean descent, Torres has been theorizing on the idea of jungle mangroves, coastal archways, and ancient cenotes. She expresses them through the symbolism of her everyday environments, meshing the two together in new and compelling ways.

She is forming a vigorous body of work, as she attempts to replicate over a dozen sites by hand as 3-inch models, from the sacred Cenotes of Mexico, to the Cave of Wonders of The Dominican Republic, to the warm Mangroves of Tanzania, that can be worn on the body as ornamentation.

Torres’ future aspiration is to get her MFA and law degree at an Ivy League Institution.