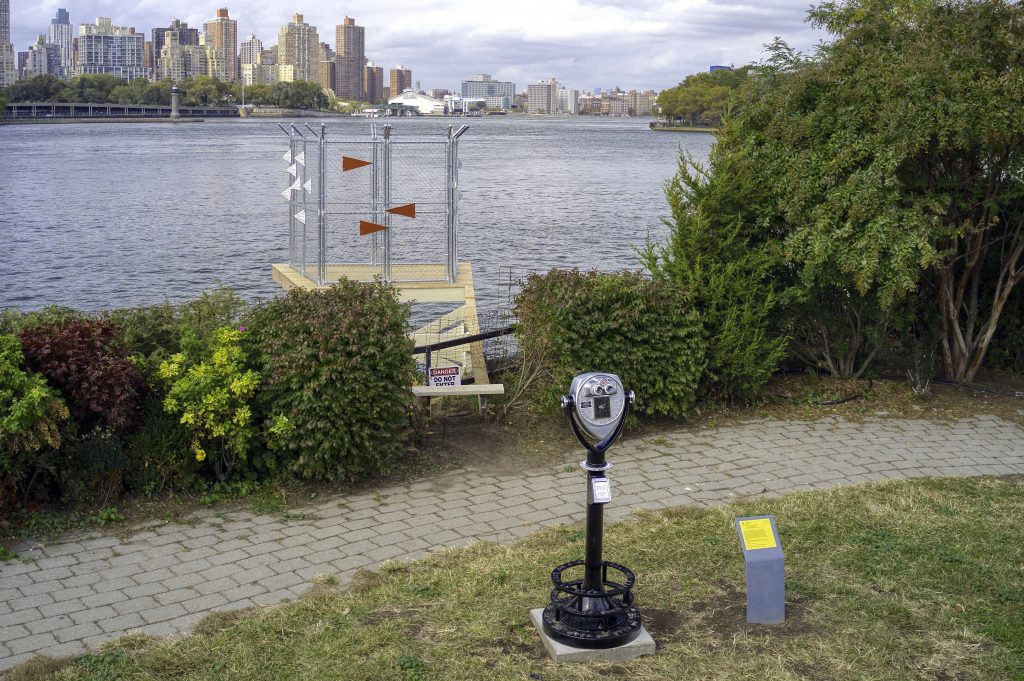 A square chain-link fence cage topped with razor wire perches over the Park’s shoreline in the artist’s monument to prison abolition. Offshore proposes a reverse-commemoration, imagining a monument constructed in the future when offshore prisons and extrajudicial detention no longer occur. Pennants bearing messages from people formerly and currently incarcerated festoon the fence. An optical viewing machine, commonly found at tourist sites for monumental architecture and scenic vistas, allows the public to contemplate this prison-like structure that appears to hover like a ghostly presence.

My name is Jenny Polak. A lot of my work focuses on the intersecting efforts of ending immigrant detention and mass incarceration.My project ‘Offshore’ is a future monument to the end of offshore prisons, jails and migrant camps – and of the practice of warehousing people in them.I’m fascinated by jetty-like structures and their meaning, so I’ve built a few over the years but never before on the water, so I was very happy to have the opportunity to build one at Socrates, a place I have a long association with. So the challenge was going to be , how to build into the water. But just as I was getting ready to build I found out that the structure must not touch the water! So I decided I could cantilever the deck with the cage so that it would seem to hover there. And as sometimes happens with art, a constraint produced a gesture that I feel more powerfully expresses some of the desperation experienced by people locked up in hell-holes of human rights abuses, like Rikers Jail or Guantanamo. Offshore is intended as an echo of Rikers, because the huge island jail is just around the next bend of the East River from here – a source of so much harm, and suffering – yet many park visitors will not know how near we are to it. That’s the function of ‘offshoring’. So to amplify that connection I invited people in the neighborhood who have had experiences of incarceration, including of Rikers, to write short poems and messages to enlighten unaware visitors about the wealth of talent and humanity that prisons and jails seek to crush. These are what you see on the pennants on the fence. Offshore is about not looking away from the people our society tries to wipe out. So part of it is a binocular viewer that I installed. I aligned it with the structure, to give viewers a way to magnify the writing on the pennants, and make sure that, looking over towards Mayor DeBlasio’s residence at Gracie Mansion, you can’t not see the prison cage in the way. The viewer magnifies the resilience and creativity and urgency of the still accumulating messages from people who I hope through this will be listened to.

Polak participates in a series of virtual programs produced by the 2020 Socrates Artist Fellows in tandem with the ‘Call and Response‘ exhibition: