‘Proposal for a Monument (Two)’ 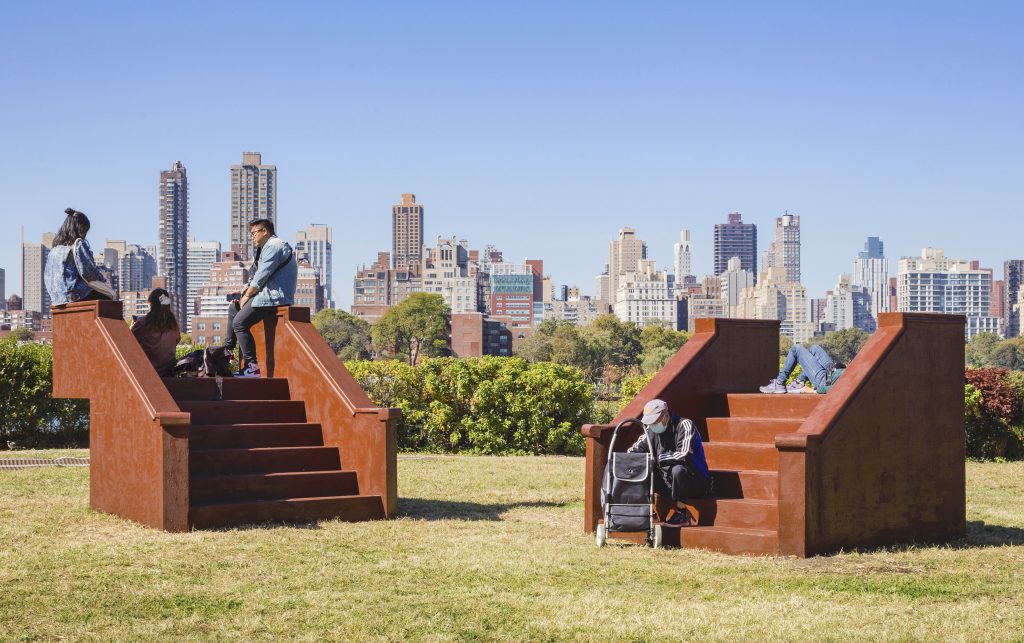 About ‘Proposal for a Monument (Two)’

Two iconic New York City brownstone stoops face each other as if in conversation – holding space for dialog around the built environment, gentrification and displacement, and monumentality. Simultaneously, the work provides a physical space to rest, distantly gather, perform, and exchange. An audio component plays a series of “stoop stories” shared by NYC residents, elevating the average person and commonplace experience to the monumental.

Thank You: Excellent Contracting for consultation and materials donation, and deep gratitude to the staff and install team at Socrates for their expertise and efforts.

Hi, my name’s Fontaine Capel. I’m going to tell you a little bit about my work, ‘Proposal for a Monument (Two)’. The piece is a pair of platonic brownstone stoops sitting in a field next to the shore. They’re turned toward each other as if in conversation. A New York City stoop is a slippery space; it’s privately owned, publicly used, a threshold and a destination, a place to observe and to be observed. In gentrifying neighborhoods across New York City, stoops that have long offered space for respite and spontaneous congregation are increasingly defended by gates and new neighbors 911 calls. So what happens when a stoop breaks from its building, leaves it’s block, and exists on its own? The liberated stoop, freestanding, belongs to everyone and no one. This is the second in a series that proposes different iterations of New York City stoops as monuments. Other works in the series include a stoop that extends like a tower straight into the sky, and another that you climb up, only to find yourself poised to climb down the same set of stairs on the other side. I constructed a mock-up piece in my grad-school studio on Harlem; from it’s steps you could see straight down 125th Street. The iteration of ‘Proposal for a Monument (Two)’ that’s here at Socrates was constructed in wood and finished with a special blend of brownstone restoration materials. Some ideas I have for the future of the series include building a full scoop out of masonry, expanding and experimenting with forms, and also filling a whole field with freestanding stoops. Thanks for coming to the exhibition, and if you’re one of the young people who asked if you could climb on sculptures while I was constructing them, yes, now you can.

Capel participated in a virtual program produced by the 2020 Socrates Artist Fellows in tandem with the ‘Call and Response‘ exhibition: