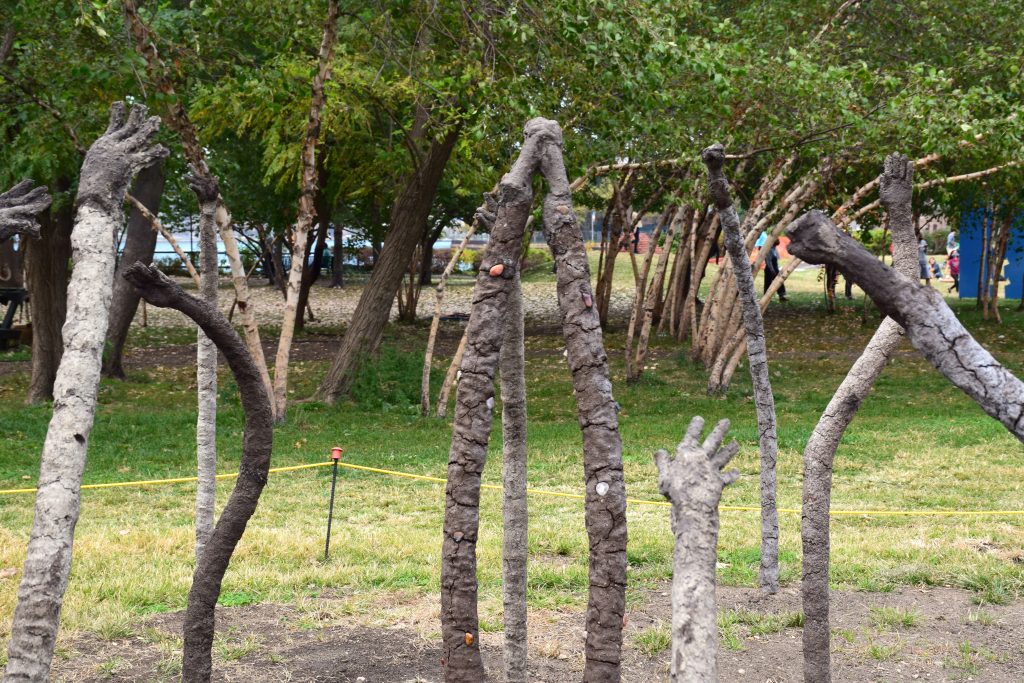 About ‘Reaching Towards Warmer Suns’

Soil sourced from the Queens-located burial grounds of enslaved African people comprises the flesh of this circle of arms that emerge from the ground like trees in a grove. The hands take on gestures of protest, joy, and communion. With a title that references Richard Wright’s writing on The Great Migration, Williams’ work bears witness to the historical and ongoing struggles for self-determination of Black American descendants of chattel slavery.

Hi, my name is Kiyan Williams. I’m a multidisciplinary artist from North New Jersey and I’m here to talk to you about my new public artwork ‘Reaching Towards Warmer Suns’ on view in the Monuments Now Call and Response Exhibition at Socrates Sculpture Park. To the right of the main gates at the entrance of the park are a series of 20 arms up stretched, reaching towards the sky, arranged in a circle. The hands are in gestures of praise, protest, celebration and communion. The sculptures are made with soil that I sourced from two locations that are significant to American history. The first location is the bank along the James River in Richmond Virginia, where some of the first kidnapped and enslaved black people touched land in the New World. The second location is a burial ground of free and enslaved African-Americans in Elmhurst, Queens. 200 years ago in the mid-nineteenth century, what is now considered Elmhurst, Queens was one of the first African American communities in New York City. The site in Queens where I sourced the soil was previously the location of an African Methodist Episcopal Church and a schoolhouse. The shape, curve and contours of the sculptures are inspired by the grove of trees adjacent to it, such that they appear to blend into their environment. ‘Reaching Towards Warmer Suns’ offers alternative aesthetic and conceptual conventions to the practice of monumentalism. Within the United States, bronze monuments have been erected to celebrate predominantly cisgender white male war veterans as an emblem of colonial and imperialist power. Further, public monuments typically commemorate a single individual regarded as heroic, and/or a historical event that regards the past as fixed and resolved. As opposed to a bronze figure of an individual that imposes on its environment and penetrates the sky, my monument is made of soil and it’s integrated into its surroundings. The multiple hands suggest a collective pursuit and experience. Black Studies scholar Christina Sharp asks, “how does one memorialize chattel slavery and its afterlife that are still unfolding? How do we memorialize an event that is still ongoing?” ‘Reaching Towards Warmer Suns’ draws on these questions and bares witness to the historical, contemporary, and quotidian struggles with and against violence that shape black life in America and globally.

Williams participated in a series of virtual programs produced by the 2020 Socrates Artist Fellows: exhibition: