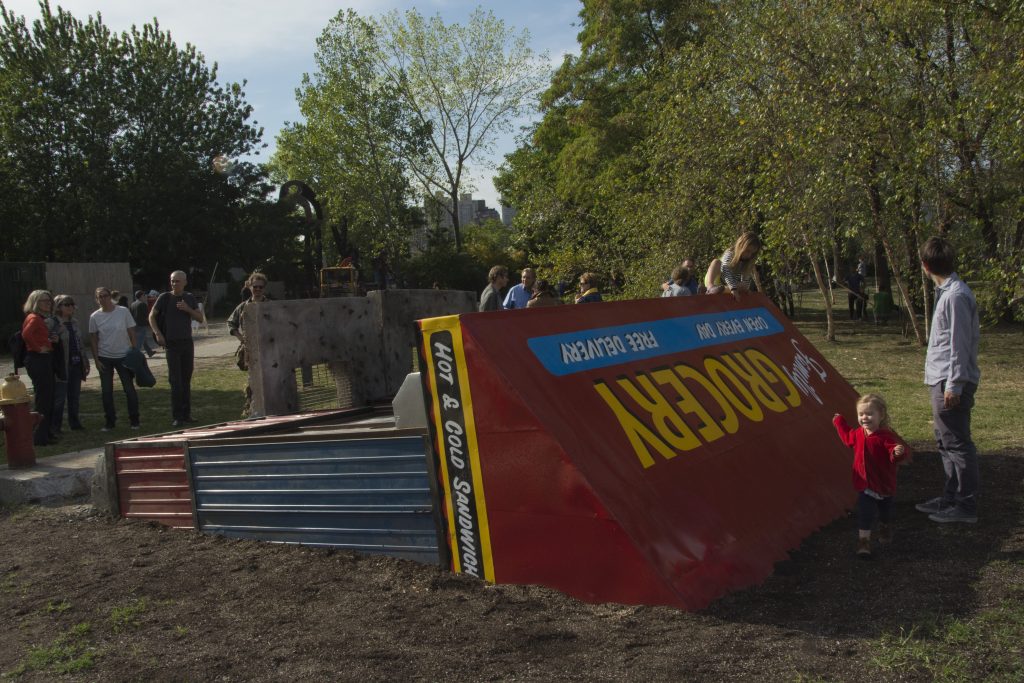 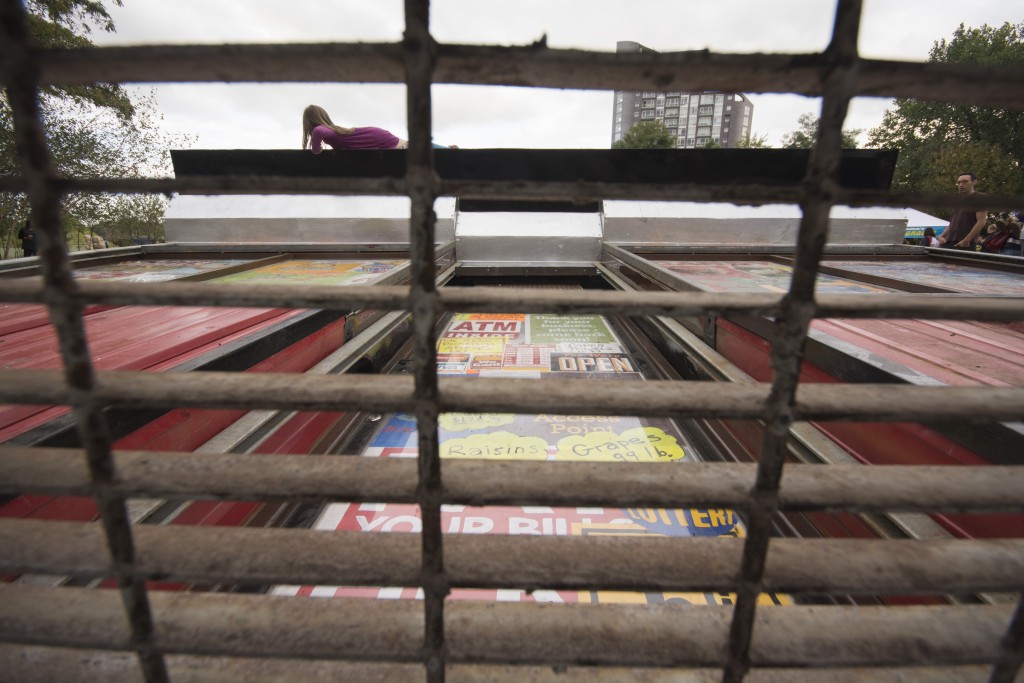 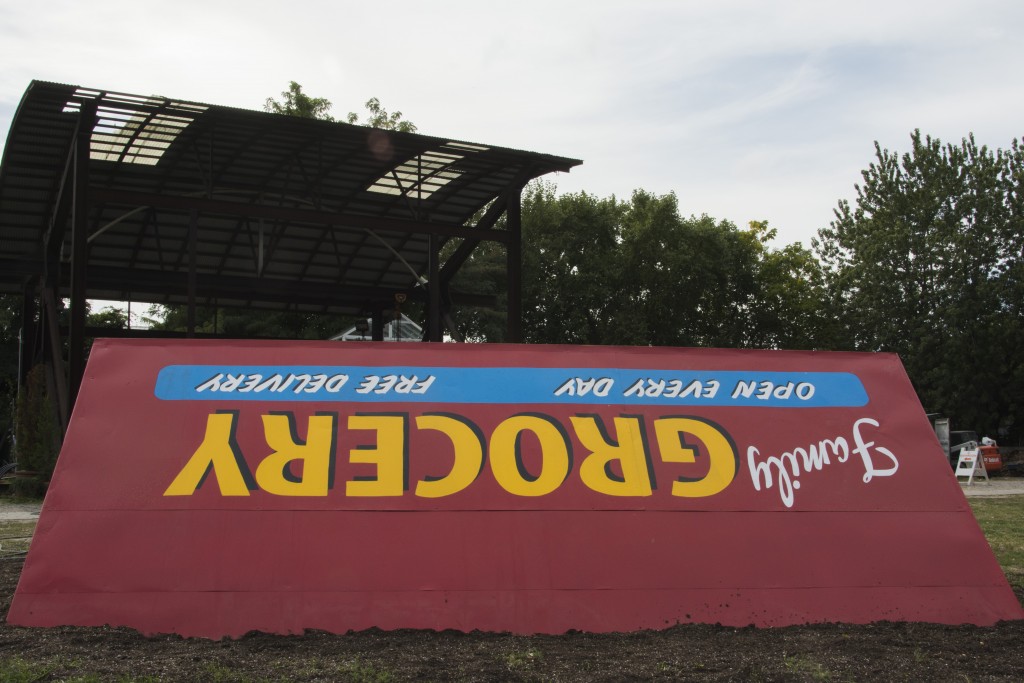 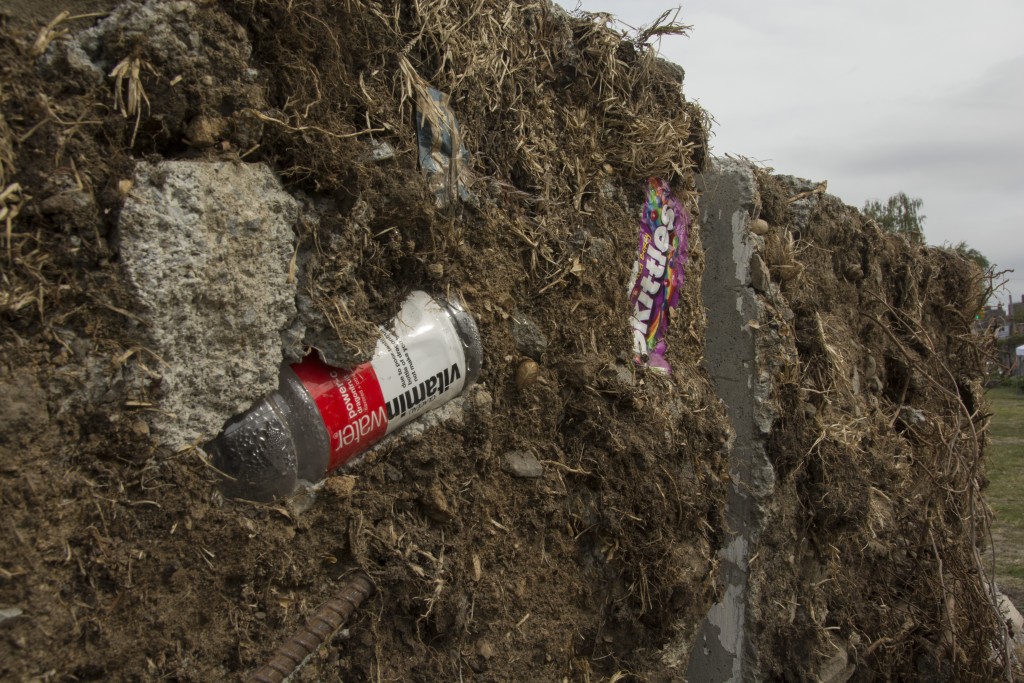 Whether you know it as a bodega, corner store, or mini mart, chances are, there are quite a few in your neighborhood. New York City’s boroughs continue to change and expand, but many of these small, traditionally family-owned storefronts continue to sell their toiletries, cold cuts, cigarettes, or whatever else you might be in need of. Charlotte Becket and Roger Sayre are exploring these businesses within the context of western Queens. For their collaborative EAF15 project Full Tilt, Becket and Sayre built the facade of a neighborhood bodega, and tipped it over so that its front faces upwards towards the sky. Full Tilt addresses the mysterious ubiquity of these stores as well as the commercial rezoning that continues to affect the park’s community. “Bodegas don’t have complete immunity,” Becket says, “but they are persistent in a way that’s not very common.”

“This is an interesting neighborhood,” Sayre says of Astoria and Long Island City. “It had always been on the edge of something… but not anymore.” He acknowledges the drastic development taking place, with changes both in residential housing as well as in commercial zoning. Their artwork looks at the effects of such development. Sayre shares that he and Becket were looking to experiment with architectural abstraction when they thought of tipping a storefront onto its back. “It was the first idea we were excited about,” Becket says.

“Even though there’s a defined identity that’s prolific and recognizable, the signage and language add a personal element,” Becket shares, “some have handwritten signs, or some tell you what the sandwich specials are. People understand that the network of bodegas is urban but also very personal. Everyone has a local version.” In Becket’s case, “We Have All What You Need” is the store that provides her with last-minute necessities. On days when she doesn’t bring enough money along, the owner simply tells her to bring the difference when she returns. “It’s definitely antithetical to the largely anonymous experience of living in New York City,” Becket says of her rapport with her local bodega owner. “Mine was a place called Julio’s,” Sayre reminisces. “But Julio died, and now it’s a fancy bakery.”

Becket and Sayre, colleagues at Pace University, began collaborating three years ago and the two have built a playful and understanding working relationship since then. Full Tilt is their fifth public art piece. With Full Tilt, they wanted to depict a store that has fallen to the ground and is now functioning on another plane or in another dimension. They drew their imagery from the classic bodega aesthetic.

Full Tilt builds on the duo’s past collaborations, which sometimes focus on changing communities and their residents’ experience amidst transformations. In the 2015 show “Small Towns” at Eastern Washington University, WA, Becket and Sayre produced From NYC With Love (2015). In this work they explore the role of another major urban community icon: the boombox. They turned one end of a 20’x30’ utility building into a giant, towering portable radio, calling out to a time when communication and shared experience was a more analogue process. The monument explored the boombox as a conduit to community engagement in a way that is similar to how Full Tilt examines the intimate relationship between residents and their bodegas.

This winter, Becket will be in “Drawing for Sculpture,” a group show opening in January at Tiger Strikes Asteroid in Brooklyn.

Sayre has 24 new pieces at The Art Project in Jersey City through February.