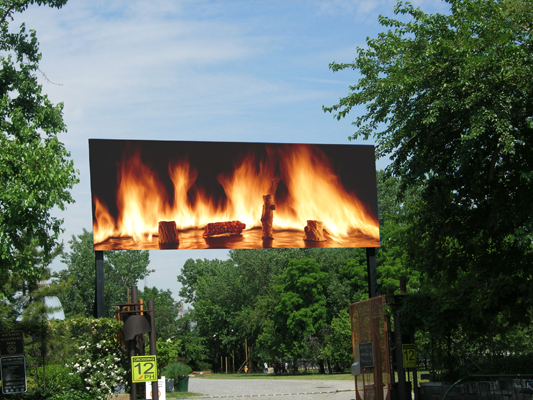 Untitled (Stump Fire #4), an 11′ x 28′ image by artist Catherine Opie, is the newest installment of the Park’s ongoing Broadway Billboard series.  Opie has created a mise-en-scene of epic scope, drama, and mystery. Nature and artifice, light and darkness are just some of the contradictory elements of Opie’s image that create an ominous tableau for us to contemplate. Neither a warm hearth, nor regenerative forest fire, we discover it is liquid, not wood, which is ablaze. The log stumps in the foreground are Opie’s own handmade clay sculptures, which further heightens the surrealism of the scene. The image hovers between an apocalyptic figment of our imaginings and the possibility of nature run amok.  What is clear, however, is that all is not well within our environment or psyche. Untitled (Stump Fire #4) is from a series of new work and will be part of an exhibition at Regen Projects, Los Angeles in 2013.

Catherine Opie is one the great photographers of this generation and documentarian of our American landscape and people. A graduate of CalArts, she currently teaches in the studio program at the University of California at Los Angeles. Select solo exhibitions include Catherine Opie: Figure and Landscape at the Los Angeles County Museum of Art (2010), Catherine Opie: American Photographer at the Guggenheim Museum in New York (2008), Catherine Opie: Chicago at the Museum of Contemporary Art Chicago (2006). Opie was a 2009 recipient of the President’s Award for Lifetime Achievement from the Women’s Caucus for Art and was awarded a United States Artists Fellowship in 2006.