The background color of this website changes based on current sky conditions in New York City. 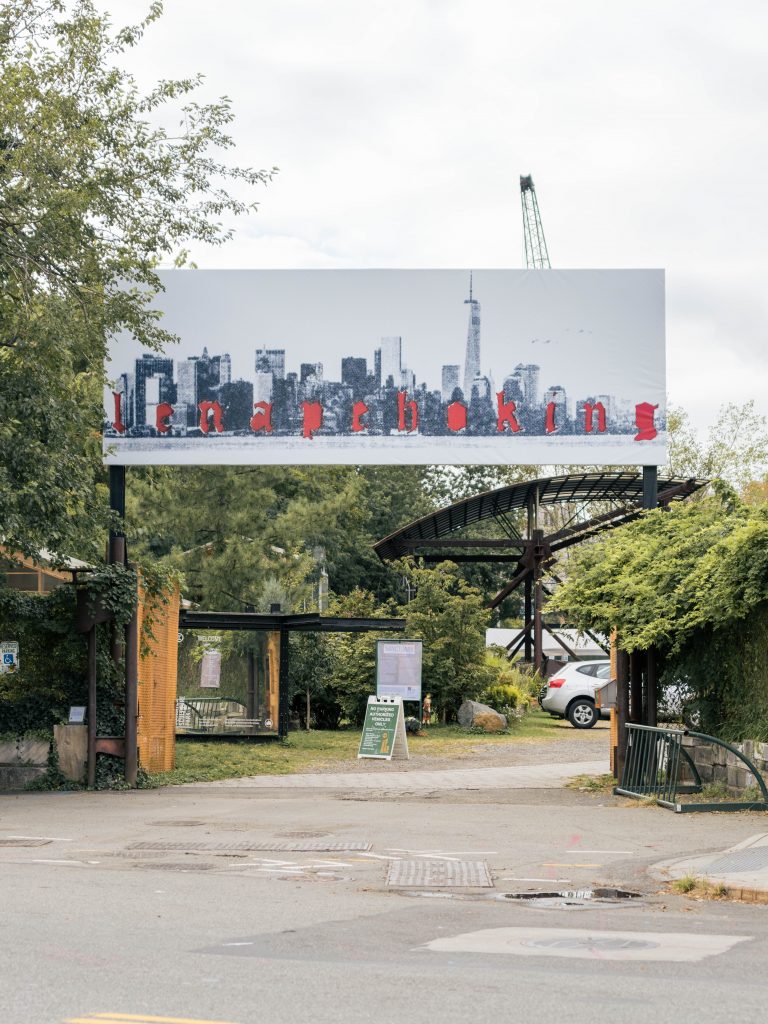 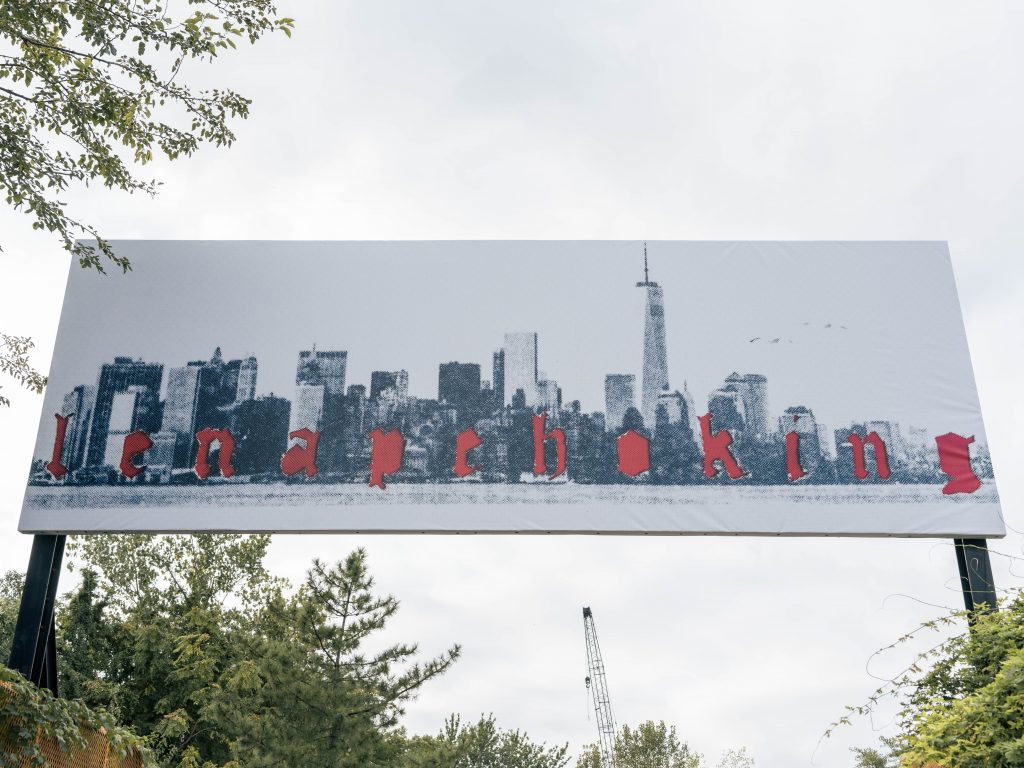 River Whittle renders the cityscape of what we now call Manhattan in deep blue and the stippled effect of half-tone newsprint. In bright red gothic-style script, the word “Lenapehoking,” the true name for the homeland of the Lenape People, is cut out of the city. The Lenape, the original inhabitants of this land, are also known as the Delaware, a name brought by European settler colonists, and who lived in the area surrounding the Delaware River and Hudson Valley River Sheds, including parts of present day Connecticut, New York, Pennsylvania, New Jersey, and Delaware. The second part of the title references the campaign to return governing power, as well as physical land, back to Indigenous people in their ancestral territories, which globally have been misappropriated and degraded by white colonizers.

The image’s starkness, the outmoded printing technique, and Gothic script evince the traumatic past of the Lenape diaspora—systematic genocide, forced relocation, and centuries of oppression. The landmass spotted by Europeans upon arrival, now tower-filled Lower Manhattan, is hazy and suggests the difficulty of seeing the past horrors revealed in the present. The amalgamation of time and land markers with the demand for “land back” highlights the artist’s insistance that collective healing, land reparations, and historical reckoning are all deeply imbricated.

The artist first engaged with Socrates Sculpture Park by writing a text for Emily Johnson’s The Ways We Love and The Ways We Love Better – Monumental Movement Toward Being Future Being(s), performed at Socrates in September 2020. This missive conveys the grief and alienation of Indigenous displacement and the understanding of land as familial and animate.

Whittle writes: “What about our separation from our Mother? That genderless matriarch who whispers their whims to us in our sleep? The first time I came home, I ran to the ocean, starving to float; be held by my Mama. Chemicals, waste. Let me drown with her because we are of flesh, the same. And sometimes it feels like we’ll be safer in the next life anyways, but these silly men can’t actually kill my Mother. And one day, if they don’t stop, she will rise up, swallow them whole. I’ll go with her and live with her in new form.”

River Whittle is a Caddo, Lenape, and Irish-American-settler Interdisciplinary artist and youth mentor. River currently lives in occupied Tiwa territory in Albuquerque, New Mexico, and is versed in photography, printmaking, and experimental video. They are also learning jewelry (silver, bronze, and copper) as well as pottery. River’s work focuses on the fluid and giving relationship between ancestors and futures beyond binary colonial structures.

“I come from the Delaware Nation of Oklahoma, otherwise known as the Lenape. This land, Lenapehoking, is our land, yet most of us don’t even have the money to visit.

When the colonizers invaded, we invited them to share this land with us. They claimed they bought the territory from us, banned us from it, and built a wall lined with our severed heads to keep us out. This area became known as Wall Street, a center for global capitalism. Settlers have never stopped colonizing our lands with systems of capitalism, racism, heteropatriarchy, and environmental destruction.

This piece was created to carve out the truth. My call for land back is the first necessary step for healing. We need settlers and rich folks to return our home to us.

No matter who you are, you can advocate for us in the spaces you occupy. Share our story, fundraise for us, seek out our opinions.

Honor the land, honor the people.

Note: for inquiries on giving land back, reach out to the following tribes / descendants of the following tribes ONLY (there are many fake “tribes” impersonating the Lenape in the East, which is possible because the real Lenapes were pushed so far away): Delaware Tribe of Indians in Bartlesville, OK; the Delaware Nation of Oklahoma in Anadarko, OK; the Stockbridge-Munsee and Mohican Community in Wisconsin; the Moravian Delaware of the Thames in Ontario, Canada; the Munsee-Delaware Nation at Munceytown in Ontario, Canada; and the Delaware of Six Nations in Ontario, Canada.”