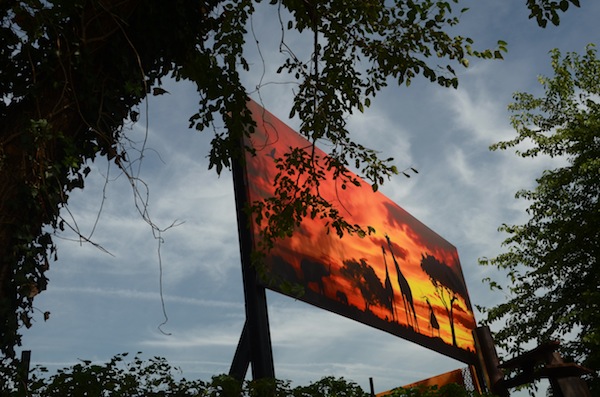 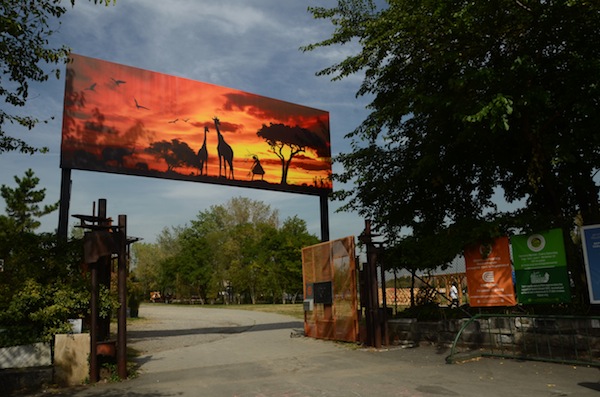 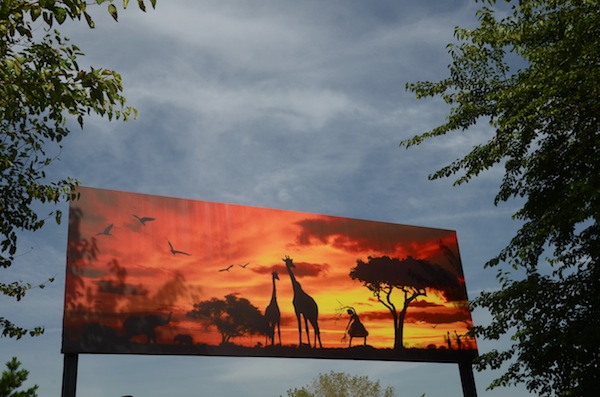 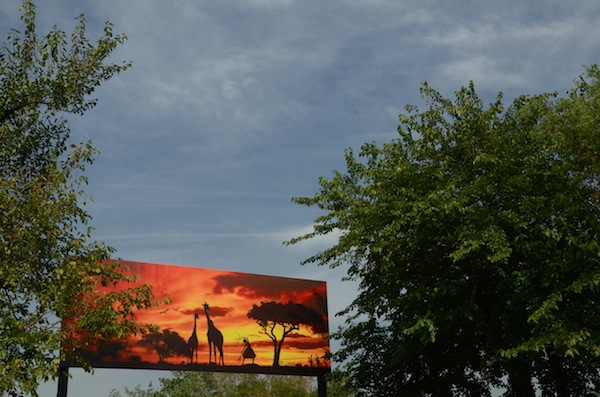 A Sunset Satire by artist Wangechi Mutu depicts a romantic ideal of the African Savanna. Mutu’s work is the newest installment of the park’s ongoing “Broadway Billboard” series, through which Socrates Sculpture Park commissions artists to create a billboard image that spans the main entrance of the park and offers a unique platform for exhibiting two-dimensional media. At least twice annually (spring and fall), Socrates installs a new work on the 11′ x 28′ billboard, which can be seen nearly a mile away on Broadway in Long Island City.

Kenyan-born Wangechi Mutu has trained as both a sculptor and anthropologist. Her work explores the contradictions of female and cultural identity and makes reference to colonial history, contemporary African politics and the international fashion industry. Drawing from the aesthetics of traditional crafts, science fiction and funkadelia, Mutu’s works document the contemporary myth making of endangered cultural heritage.

Piecing together magazine imagery with painted surfaces and found materials, Mutu’s elaborate collages mimic amputation, transplant operations and bionic prosthetics. Her figures become satirical mutilations. Their forms are grotesquely marred through perverse modification, echoing the atrocities of war or self-inflicted improvements of plastic surgery. Mutu examines how ideology is very much tied to corporeal form. She cites a European preference to physique that has been inflicted on and adapted by Africans, resulting in both social hierarchy and genocide.

Mutu’s figures are equally repulsive and attractive. From corruption and violence, Mutu creates a glamorous beauty. Her figures are empowered by their survivalist adaptation to atrocity, immunised and ‘improved’ by horror and victimisation. Their exaggerated features are appropriated from lifestyle magazines and constructed from festive materials such as fairy dust and fun fur. Mutu uses materials which refer to African identity and political strife: dazzling black glitter symbolises western desire which simultaneously alludes to the illegal diamond trade and its terrible consequences. Her work embodies a notion of identity crisis, where origin and ownership of cultural signifiers becomes an unsettling and dubious terrain.