Broadway Billboard – ‘Word on the Street: Love Not Hatred’ 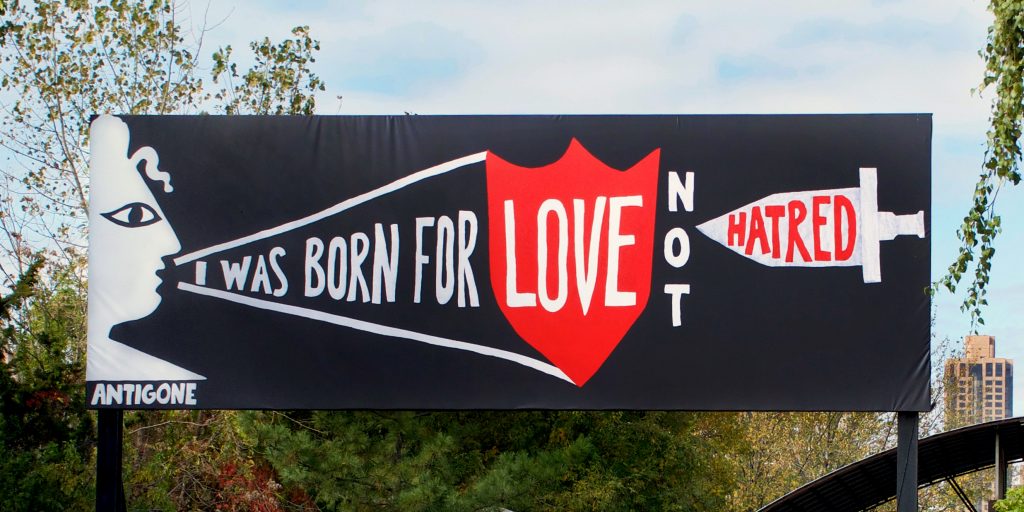 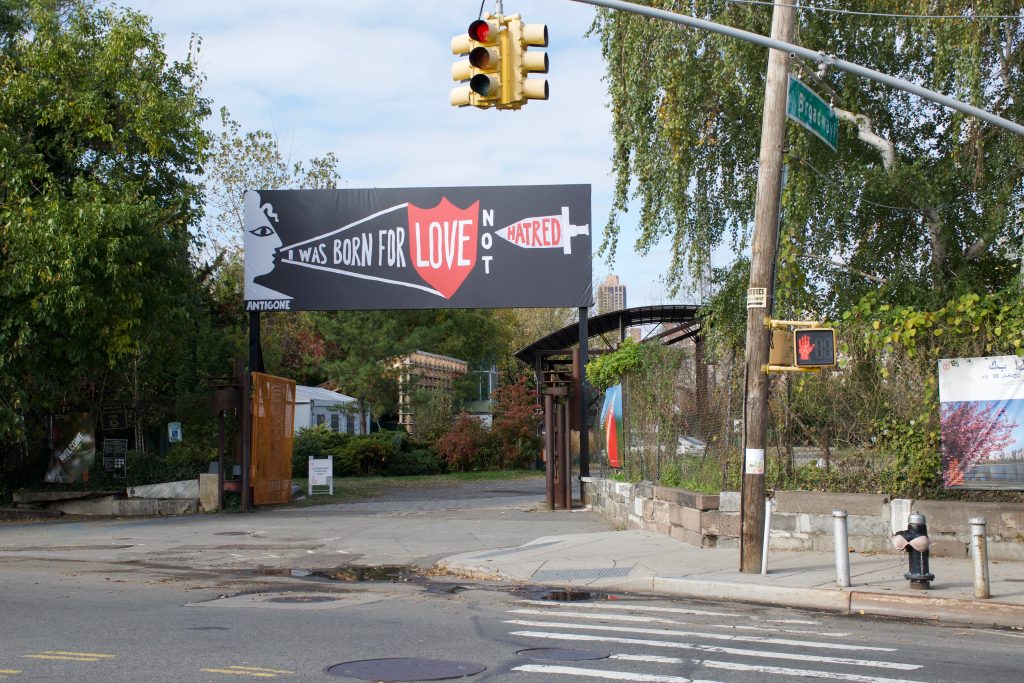 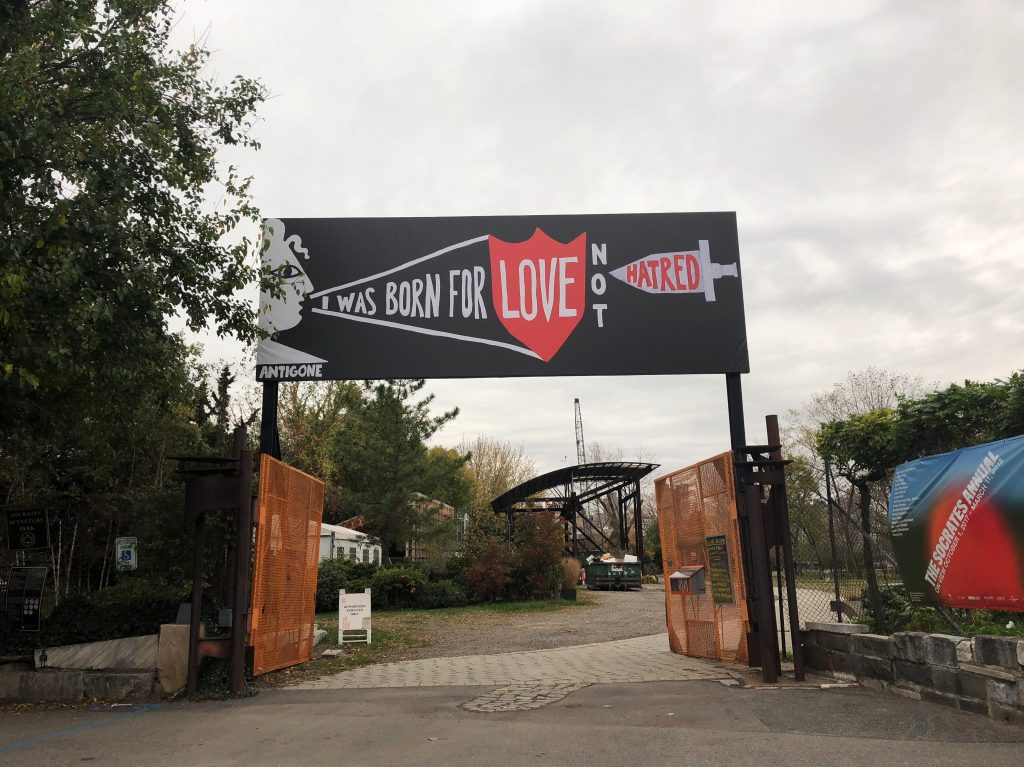 ‘Word on the Street: Love Not Hatred,’ a collaboration between artist Amy Khoshbin and poet Anne Carson, opened November 7, 2017 – Election Day. It is the second Broadway Billboard to be presented in response to Socrates’ inaugural competition for billboard proposals.

This Broadway Billboard installment is part of Khoshbin’s ongoing series, ‘Word on the Street,’ an all-female public art initiative in collaboration with public art producer, House of Trees. The Word on the Street series facilitates the creation and presentation of poetic banners by acclaimed writers and visual artists who, through the public use of visual text, can speak directly to the urgent, timeless concerns of the individual, the community, and citizenship. Launched in response to the 2016 election, Khoshbin originally created banners from slogans Carson wrote responding to the political landscape, which have appeared in a variety of forums, from major marches across Washington D.C. to the Whitney Houston Biennial.

Located at Socrates Sculpture Park, ‘Word on the Street: Love Not Hatred,’ celebrates the inclusive ethos of the Park, as well as its roots in community organizing. The billboard captures the handcrafted feel and felt texture of do-it-yourself protest signs, highlighting the intersection of craft and resistance movements.

The employed text features Classics scholar Anne Carson’s translation of a line in Sophocles’ ‘Antigone,’ a tragedy that explores the rule of law, familial duty, and civil disobedience. The passage is Antigone’s response to Creon, King of Thebes, who forbids her from giving her deceased brother, whom he considers a traitor, a proper burial. Many interpret Antigone as a figure of moral righteousness and a fearless defender of individual rights in the face of authoritative oppression, speaking truth to power.

Amy Khoshbin is an Iranian-American Brooklyn-based artist merging performance, video, collage, music, and fabric arts. She has shown her solo and collaborative work at venues such as Brooklyn Academy of Music (BAM), Leila Heller Gallery, Abrons Arts Center, National Sawdust, Mana Contemporary, NURTUREart, and festivals such as River to River and South by Southwest. She has received residencies at The Watermill Center, Lower Manhattan Cultural Council’s Workspace Residency 2014-17, Anderson Ranch, Mana Contemporary, Banff Centre for the Arts in Canada, Team Effort! in Glasgow, Scotland, Tisch School of the Arts at New York University, and is a recipient of Rema Hort Mann Foundation Artist Community Engagement Grant. Khoshbin has bachelor’s degrees in Film and Media Studies from the University of Texas at Austin and a master’s degree from the Interactive Telecommunications Program at New York University.

Anne Carson has published numerous books of poetry, including Float; Red Doc>; The Beauty of the Husband: A Fictional Essay in 29 Tangos, winner of the T.S. Eliot Prize for Poetry; Autobiography of Red; and Short Talks. Also a Classics scholar, Carson is the translator of Electra, If Not, Winter: Fragments of Sappho, and An Oresteia, among others. She is also the author of Eros the Bittersweet. Her awards and honors include the Lannan Literary Award, the Pushcart Prize, the Griffin Poetry Prize, a Guggenheim fellowship, and the MacArthur Fellowship. She currently teaches in New York University’s creative writing program.

ABOUT THE BROADWAY BILLBOARD

The 2017 selection is the first time a Broadway Billboard will be presented through an open competition. Titled ‘Open Call/Call to Action,’ the competition was launched in the aftermath of the 2016 election and asked proposals to address ideas of the public, citizenship, collectivism, representation, and democratic freedoms. Guillaume Légaré’s billboard, ‘Welcome,’ was the first presentation in response to the competition, and opened on July 4, 2017, Independence Day.