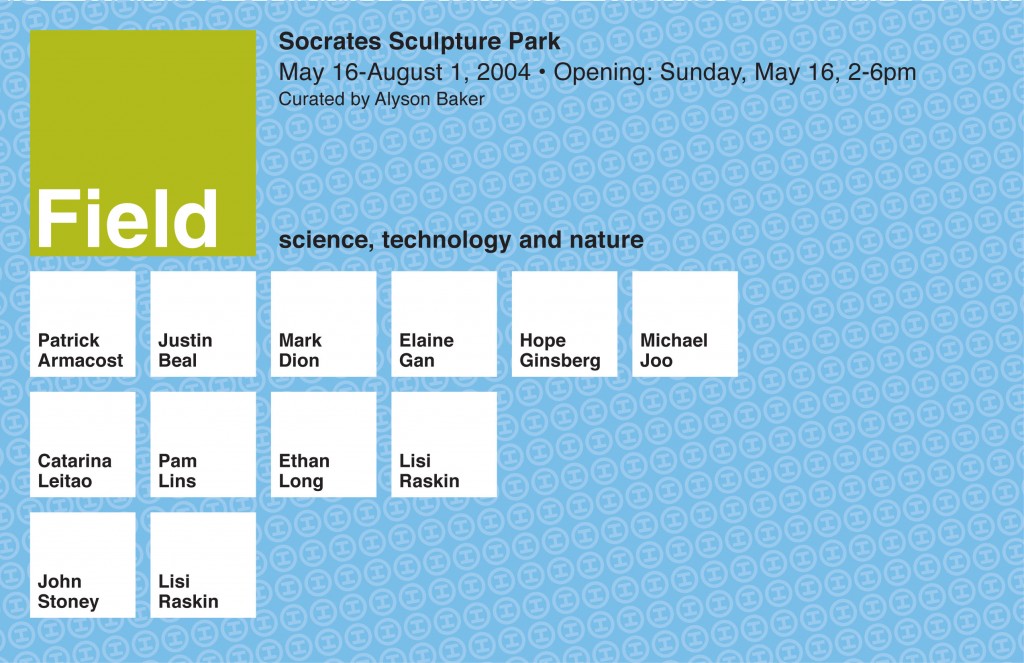 Curated by Alyson Baker, this exhibition examines the ways in which organic products and systems are manipulated through scientific practice, mediated by marketing strategies, effected by human use of natural resources, and augmented by corporate production and industrial innovation. Some of the works in the exhibition address these themes through poetic and symbolic means — such as Elaine Gan’s carefully constructed, aluminum and rubber structure that appears to protect and support three cherry trees while responding to their growth, evolving and changing form as the trees flower and then gain foliage during the course of the exhibition. Another example is Hope Ginsburg’s iconic 20 foot tall, two-dimensional rendition of the Jolly Green Giant that becomes a symbol of contemporary agricultural technologies — embodying both the current mass production “food-science” system and the power required to revolutionize the food industry.

Catarina Leitao’s signs, posted at various points around the Park, advertise expertly engineered products that make the outdoor experience safer, more convenient and comfortable or allow us to blend in and function more efficiently in the wild, addressing our conflicting desires to commune with nature while being protected from natural elements. In other installations, like Pam Lin’s garden, nature is called into the service of language as plants flower to spell different words as the seasons change.

Other works, like Mark Dion’s East River Biological Field Station, Patrick Armacost’s Stacked Fluvial System, and Lisi Raskin’s Portal use the visual vocabulary and practices of science to create works that function as laboratories for observation, experimentation and research.

Other works directly infuse organic materials with high tech systems like the surface of Ethan Long’s 10 by 10 foot packed earth cube that is dotted with light from fiber optic cables. Another elaborately engineered work is John Stoney’s scale recreation of Old Faithful — a constructed system that mimics the world famous tourist attraction in Yellowstone National Park. Additional works include Mitch Miller’s sculptural version of an oil well constructed of salvaged wood and children’s toys, and Michael Joo’s presention of a photo-based work of the Alaskan Pipeline on a 10 x 28 foot billboard that spans the entryway to the Park.