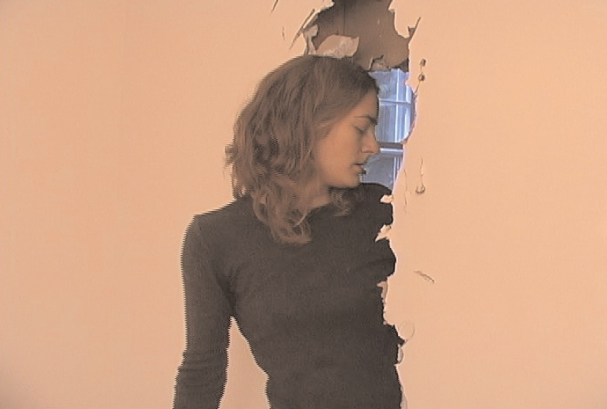 Tanyth Berkeley recorded performances by street musicians she met while traveling on the New York City subway. Serenade features seven musicians who belt out classic love songs from the 60’s, 70’s and 80’s. It’s an incongruous mix of songs and crooners who are often drowned out by public announcements and passing trains.

To film Reduction, Justine Cooper and Joey Stein worked with an industrial-grade infrared camera that registers longer wavelengths (i.e. heat), as opposed to the visible electromagnetic spectrum. In the absence of those visible light waves, we see below the surface of the skin to the delicate, hot threads of veins and arteries. The dialogue between the two characters, in contrast to the complexity of the infrared technology, reduces language to a crude or primal communication system.

Shaun Gladwell’s Double Line Work traces the movement of a skateboarder along the blue line traveled by runners carrying the torch that was eventually used to light the flame at the Sydney Olympics in 2000. In another work, Shaun takes on the theme of extreme sports in the gravity-defying Tangara. His work places an emphasis on the city, in this case Sydney, as a stage for choreographed performances and interventions. Storm Sequence presents freestyle skate boarding on the promenade of Bondi Beach, Sydney. In PKWY/TNPKE/TUNNEL, Trevor Morgan documents the commuter’s fluctuating states of conscious and unconscious space by traversing the physical, social and psychological terrain of a repeated journey to New York. This slow motion video allows us to contemplate the physical spaces we view in the most obvious sense, or to drift into more ambiguous psychological spaces. By simultaneously presenting both the journey ahead and its immediate past in the rear-view mirror, PKWY/TNPKE/TUNNEL invites the viewer to contemplate where they are, and how and why they got here.

Ann Weathersby turns the camera on herself and engages elements of video, sculpture and performance using the body to provoke a physical, psychological and emotional experience. In Hermit Lane, a woman tunnels through an empty house using a sledgehammer and an axe. As she ruptures surfaces, creating crawlspaces from room to room, the unsteady hand of the camera operator fuses a rhythm with the steady swings of her arm.

Foundation for the Visual Arts, Showtime. This program is supported, in part, by public funds from the New York City Department of Cultural Affairs, the National Endowment for the Arts, New York State Council on the Arts, and The Andy Warhol Foundation for the Visual Arts. Special thanks to the City of New York, Mayor Michael R. Bloomberg, Queens Borough President Helen M. Marshall, City Council Speaker A. Gifford Miller, Council Member Eric Gioia, and the Department of Parks & Recreation, Commissioner Adrian Benepe. Socrates Sculpture Park is grateful for the dedication of our volunteers, patrons and friends and the generosity of: Showtime Networks, Big City Graph-X & Printing, and Steve Mosier. Justine Cooper is represented by Julie Saul Gallery, New York. Shaun Gladwell is represented by Sherman Galleries, Sydney, Australia.