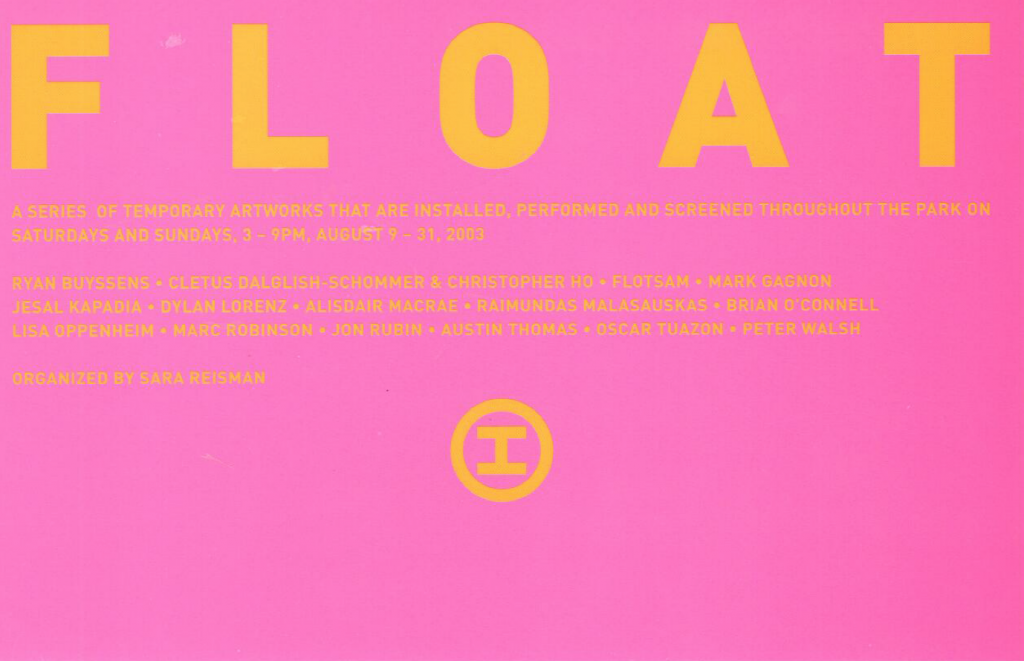 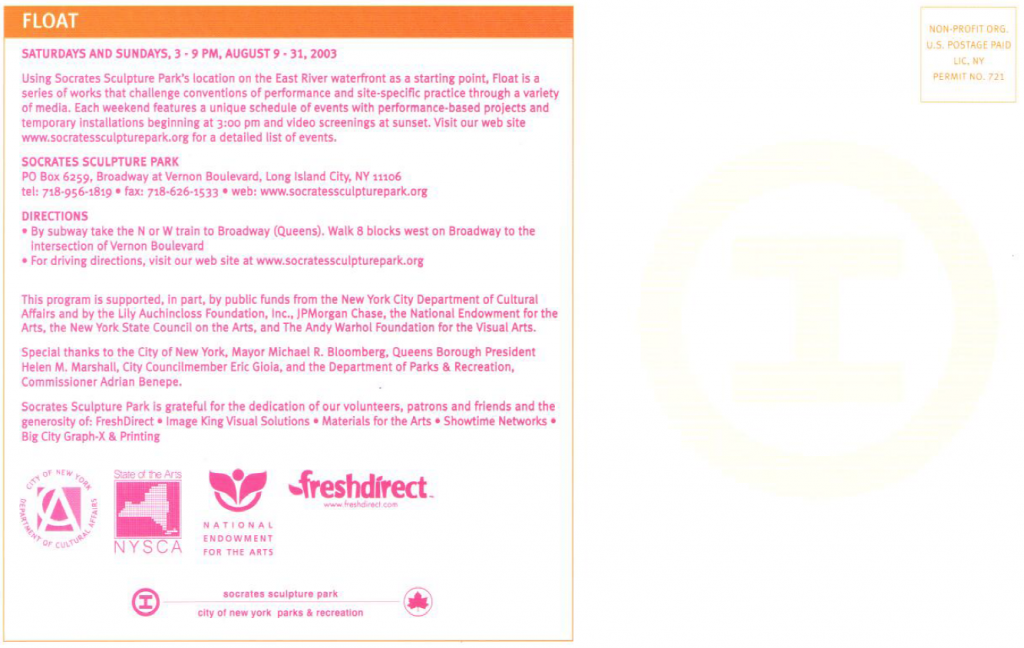 Using Socrates Sculpture Park’s location on the East River waterfront as a starting point, Float is a series of works that challenge conventions of performance and site-specific practice through a variety of media. Each weekend features a unique schedule of events with performance-based projects and temporary installations beginning at 3:00 pm and video screenings at sunset.

This program has been organized by Sara Reisman. Admission is free.

Socrates Sculpture Park is pleased to announce Float, a new project series taking place in the Park on Saturdays and Sundays in August. Referencing Socrates Sculpture Park’s location on the East River waterfront, Float is a series of temporary artworks that will be installed, performed, and screened throughout the Park on weekends from August 9 through August 31. The projects in the series challenge conventions of performance and site-specific practice through a variety of media and formats.

Each weekend features a unique schedule of events including temporary installations by flotsam and Oscar Tuazon that address how public space and the built environment are regulated, while projects by Jesal Kapadia, Alisdair MacRae, and Peter Walsh take up environmental and geopolitical concerns that relate to the urban waterfront. Several installations on view throughout the series include a mural by Mark Gagnon, a project on tourism by Brian O’Connell, and Austin Thomas’s Perchance: A Floating Scenic Overlook.

A video program including works by Ryan Buyssens, Jesal Kapadia, Dylan Lorenz, and Lisa Oppenheim will be presented on Sunday evenings at sunset. Highlighting the transition from day into night, Jon Rubin stages a performance of Floating Cinema in Hallets Cove, while Christopher Ho and Cletus Dalglish-Schommer project subtle moving images in the Park. Float opens with a one-night video program selected by Raimundas Malasauskas, and closes with a parade by Marc Robinson.

This program is supported, in part, by public funds from the New York City Department of Cultural Affairs and by the Lily Auchincloss Foundation, Inc., JPMorgan Chase, the National Endowment for the Arts, the New York State Council on the Arts, and The Andy Warhol Foundation for the Visual Arts. Special thanks to the City of New York, Mayor Michael R. Bloomberg, Queens Borough President Helen M. Marshall, City Councilmember Eric Gioia, and the Department of Parks & Recreation, Commissioner Adrian Benepe. Socrates Sculpture Park is grateful for the dedication of our volunteers, patrons and friends and the generosity of: FreshDirect, Image King Visual Solutions, Materials for the Arts, Showtime Networks, Big City Graph-X & Printing