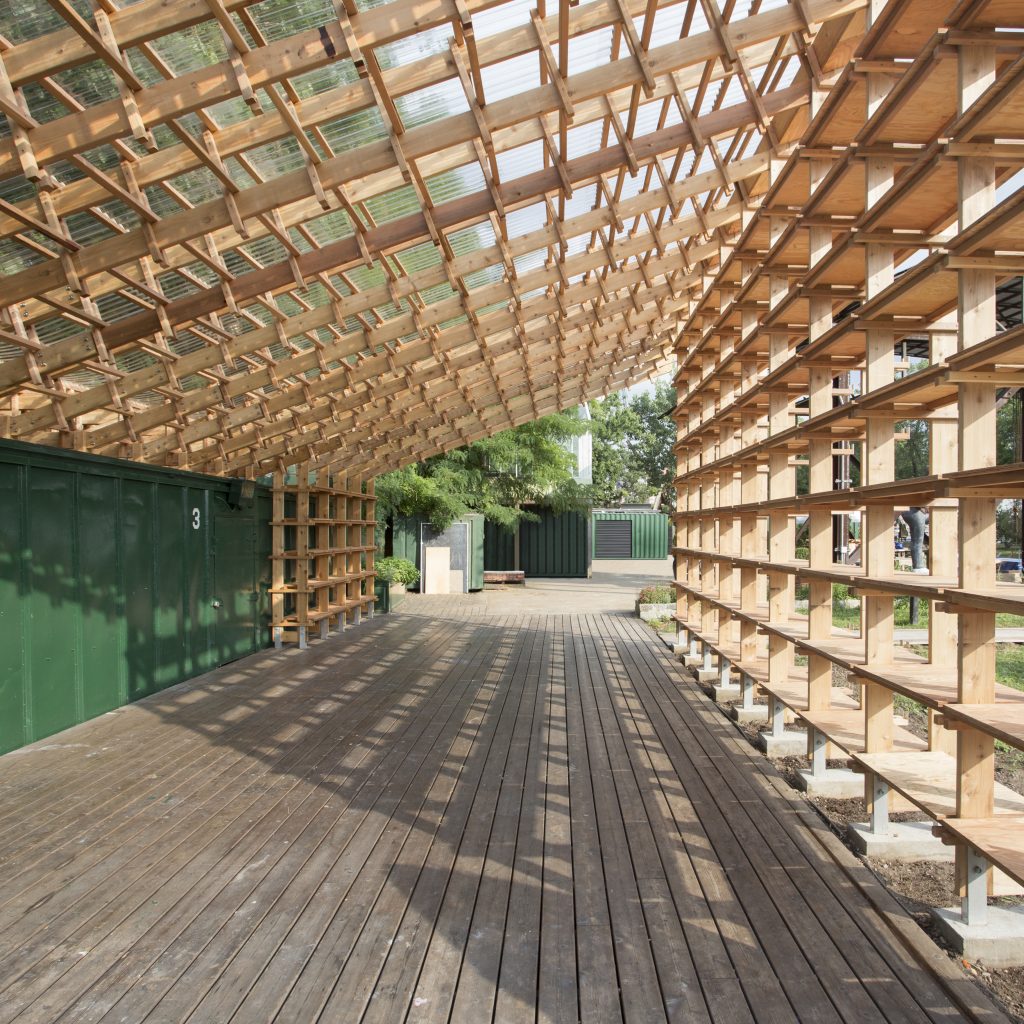 Socrates Sculpture Park and The Architectural League of New York are pleased to announce this year’s winning proposal for Folly, an annual juried competition for architects and designers. The 2016 winner is the New York City-based firm Hou de Sousa, with their inventive proposal Sticks. Modeled to fit and complement existing site conditions, Sticks is a simple assembly of standard dimensional lumber interconnected to form a structural frame for educational and community use, as well as for providing art and material storage and display space. Finally, its porous façade reflects the park’s spirit of accessibility and dedication to transparency of process.

Hou de Sousa’s proposal was selected from submissions from around the world and reviewed by a jury of five esteemed architects and artists, comprising Jarrod Beck (artist and 2012 Emerging Artist Fellow), Stella Betts (LEVENBETTS), Lauren Crahan (Freecell Architecture), Giuseppe Lignano (LOT-EK), and John Hatfield (Executive Director of Socrates Sculpture Park). In past years, the Folly program has investigated the intersection between sculpture and architecture through the conceptual framework of “follies”—temporary structures that intentionally served no utilitarian purpose.

Marking the program’s fifth and the park’s thirtieth anniversaries, Folly 2016 marks a departure from previous years’ competitions by asking entrants to design a functional structure to enhance the park’s public programs. The result is a durable design that explores the relationship between art and architecture, while also creatively enhancing the park’s education studio, where more than 10,000 students annually participate in art-making classes.

Throughout May and June this summer, Hou de Sousa will be in the park building Sticks, in full view of the public; this transparency of the creative process is a distinct component of the Folly program. Sticks will be accompanied by a digital catalogue and unique editorial content hosted on archleague.org that details the project and process, featuring interviews with the architects and top proposals from the 2016 competition.

Hou de Sousa is an award-winning New York-based architecture and design studio founded by Josh de Sousa and Nancy Hou. The office has completed a range of work, including private residences, restaurants, public spaces, and art installations. Their primary objective is to provide innovative design solutions which are culturally progressive and environmentally responsible.

Hou de Sousa would like to thank Shaina Saporta and Daniel DiChiro of Arup for their engineering collaboration. They are also especially grateful for the efforts and contributions of Emily Orsburn and Sumit Sahdev.

The Folly program is an annual competition among emerging architects to design and build a large-scale project for public exhibition at Socrates. The program is directed jointly by Jess Wilcox, the park’s Director of Exhibitions, and Anne Rieselbach, Program Director at The Architectural League of New York. Socrates and the League launched the annual Folly program in 2012 to explore the intersections and divergences between architecture and sculpture. Through an annual juried competition, the program creates an opportunity for one emerging architect or designer to build a project in an urban, public realm. Previous winning proposals include Torqueing Spheres, 2015, by IK Studio; SuralArk, 2014, by Austin+Mergold; tree wood, 2013, by Toshihiro Oki architect p.c.; and Curtain, 2012, by Jerome W. Haferd and K. Brandt Knapp.

Folly is a partnership between Socrates Sculpture Park and The Architectural League of New York. The program is funded, in part, by a major gift from the Graham Foundation for Advanced Studies in the Fine Arts, as well as by public funds from the New York State Council on the Arts with the support of Governor Andrew Cuomo and the New York State Legislature and the New York City Department of Cultural Affairs, in partnership with the City Council. Socrates Sculpture Park’s exhibition program is also supported by the generosity of Charina Foundation, Mark di Suvero, Sidney E. Frank Foundation, Maxine and Stuart Frankel Foundation for Art, Agnes Gund, Lambent Foundation Fund of Tides Foundation, Ronay and Richard Menschel, Ivana Mestrovic, Plant Specialists, Leonard and Louise Riggio, the Shelley and Donald Rubin Foundation, Mr. and Mrs. Thomas W. Smith, and Spacetime C.C.