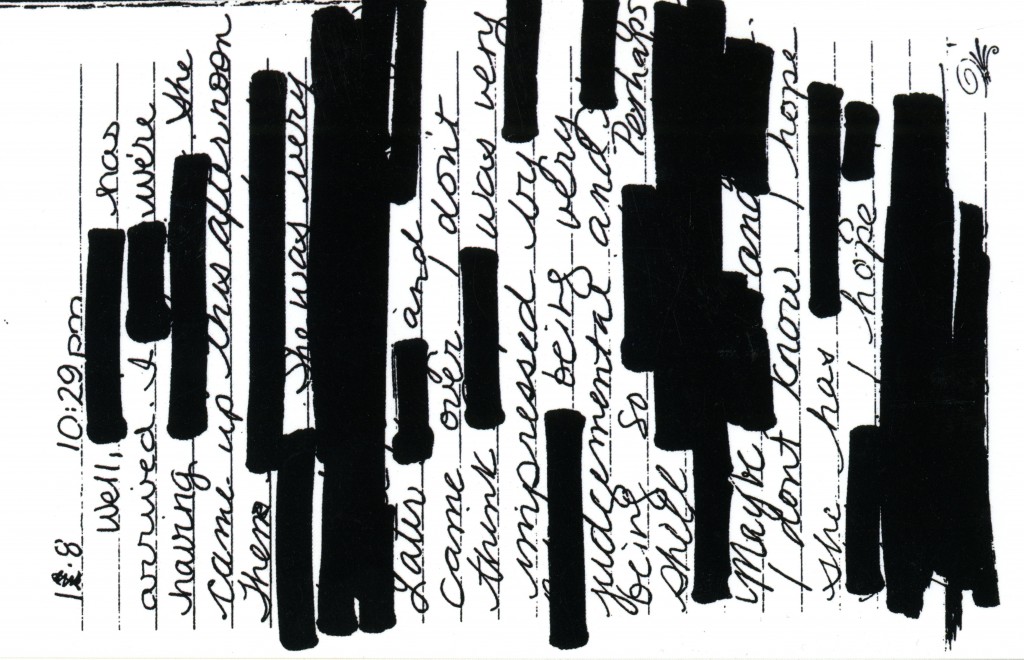 “Admit it. You’ve read someone else’s diary. Maybe you weren’t nosy, perhaps you just wanted to assure yourself that you weren’t the only one who was insecure and scared — or has lied or cheated. Or maybe you did want to spy…”

For this installation, the artist has created an information kiosk to which she will post pages of her sister’s diary on a weekly basis. Names, places, emotions and other information that her sister does not want us to read have been crossed out, resulting in pages that are reminiscent of FBI files while forming an expressive poetry of partially revealed information. The kiosk becomes a public forum for the presentation of secret thoughts and will accumulate both the diary pages and community postings.

Anissa Mack lives and works in Brooklyn, NY and has recently been included in exhibitions at SculptureCenter, P.S.1 Contemporary Art Center, and the San Francisco Institute for the Arts. Two of her latest projects included Pies for a Passerby produced for the Public Art Fund, and Harlem Postcards commissioned by The Studio Museum in Harlem.

This project is made possible by the dedication and support of our volunteers, patrons and friends and by the generosity of: Lily Auchincloss Foundation, Inc., Carnegie Corporation of New York, The Cowles Charitable Trust, The Fifth Floor Foundation, The Horace W. Goldsmith Foundation, JPMogan Chase, Naitonal Endowment for the Arts, New York State Council on the Arts, The Andy Warhol Foundation for the Visual Arts. With special thanks to Jenna Mack.