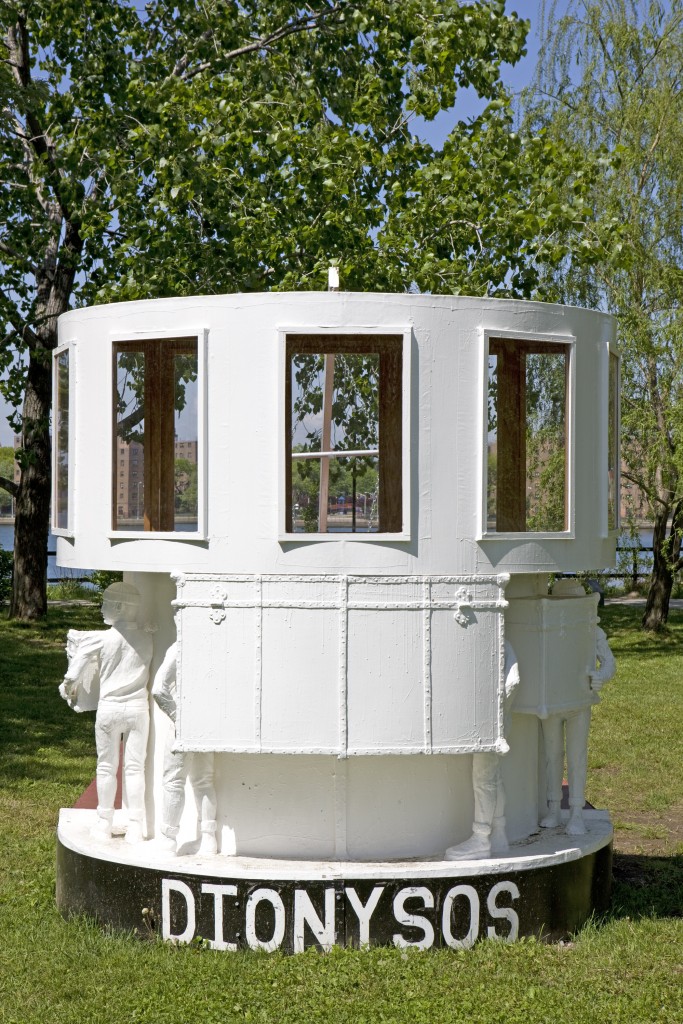 Temple of Dionysos is a sculpture that is part cargo boat, part neoclassical temple. The deck of the boat doubles as a stage; its crane serves as a deus ex machina, or “god from the machine”. In ancient Greek theatre, a crane was used to lower actors who played gods onto the stage, serving as a device to expeditiously resolve conflict in drama.

For the opening, the artist welcomes willing audience members to sit on a chair attached to the crane, which is then lifted by manipulating weights on the other end.

The shape of the boat deck begins with the formal semi circle of the amphitheater, which is elongated and bounded with another semi circle at its stern. This simple geometry reflects the purely utilitarian, “machine esthetic” of cargo boats. At the base of the semi circular wheel house, there is a frieze of longshoremen carrying crates. The combination of the “machine esthetic” and the neoclassical frieze recalls 1930’s art and architecture, which purposefully glorified the worker.

Dionysos is the god of theatre and it was for the Dionysic festivals that the first written plays were performed. This modern Temple of Dionysos does not serve as a stage for a specific performance; instead it gives the viewer an experience akin to walking onto an empty stage. One may wonder at performances past, or experience a heighted self awareness under the gaze of an invisible crowd.

Funding for Open Space projects has been provided by Carnegie Corporation of New York, Charina Endowment Fund, Mark di Suvero, Thomas Smith Foundation, and Starry Night Fund of Tides Foundation. This exhibition is funded, in part, by public funds from the Visual Arts Program of the New York State Council on the Arts; the New York City Department of Cultural Affairs; and an award from the National Endowment for the Arts. Special thanks to the City of New York, Mayor Michael R. Bloomberg, Queens Borough President Helen M. Marshall, City Council Speaker Christine C. Quinn, Assemblywoman Catherine Nolan, City Commissioner Eric Gioia, and the Department of Parks & Recreation, Commissioner Adrian Benepe. Socrates Sculpture Park is grateful for generous contributions made by Plant Specialists, Spacetime C.C., and for the assistance and support of our volunteers and friends.