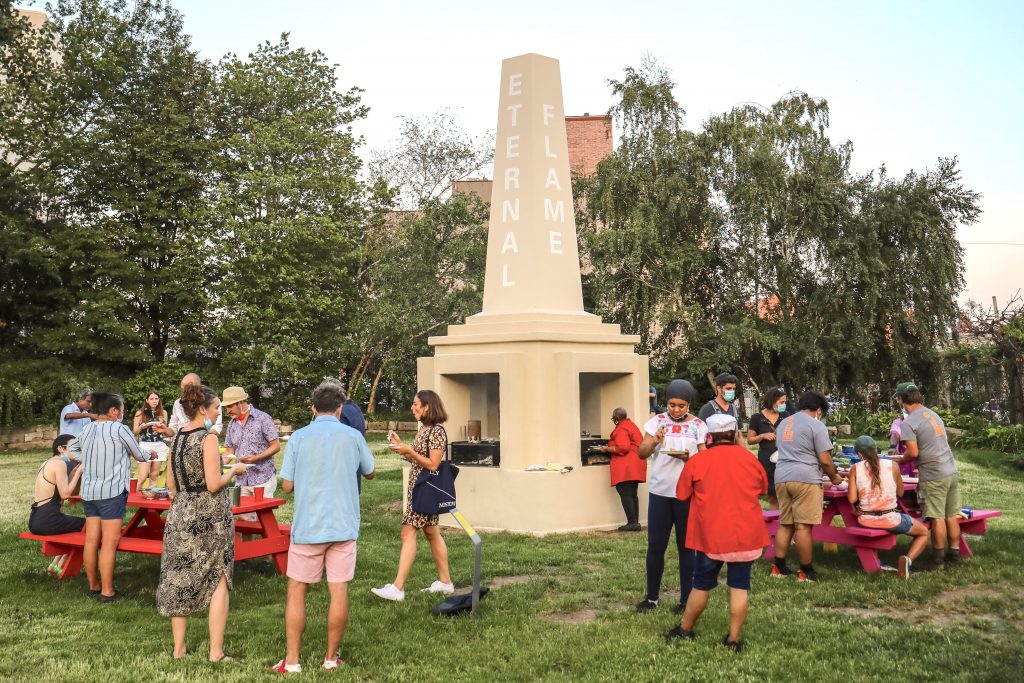 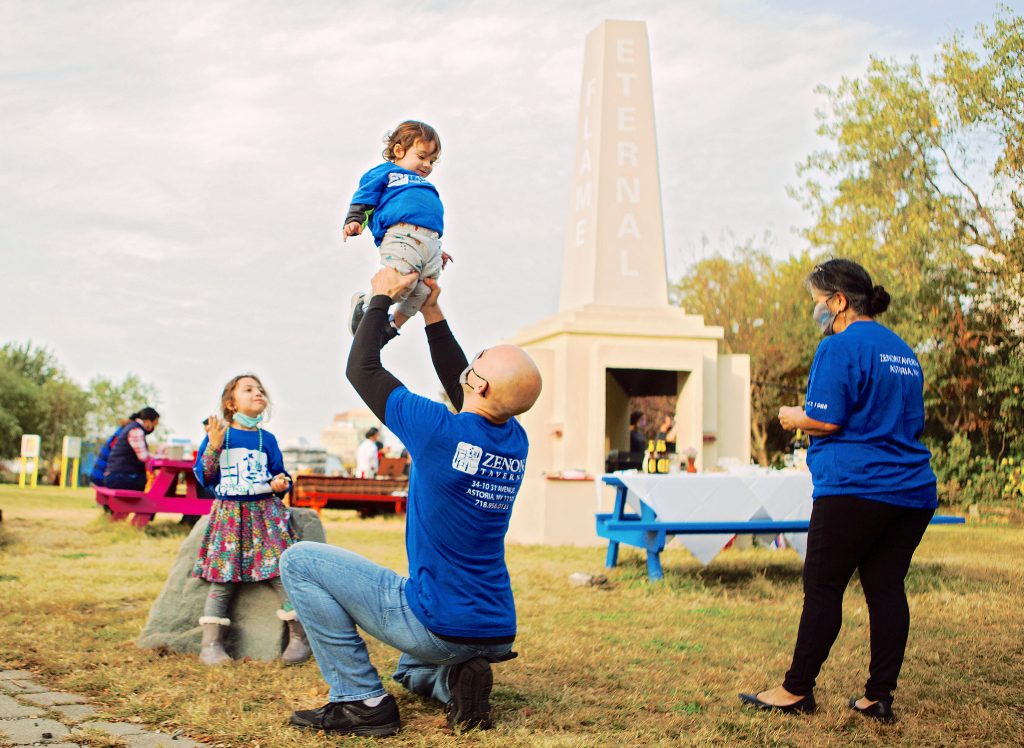 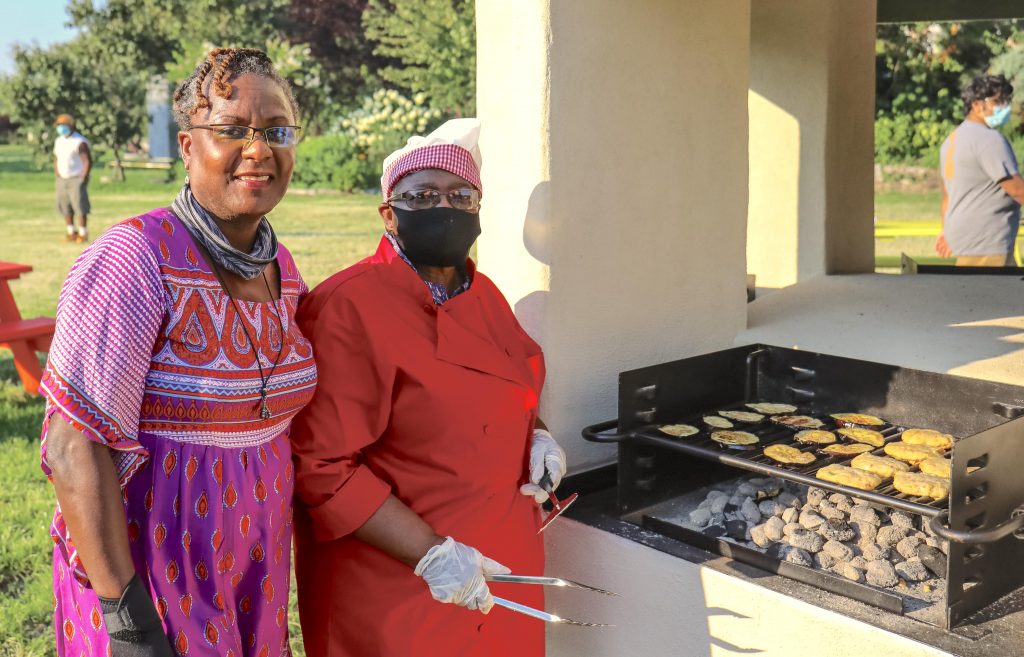 Paul Ramírez Jonas’ ‘Eternal Flame’ is a monument in the form of a communal grill and imagines cooking culture as both a symbolic and real eternal flame – there is always a lit cooking fire somewhere on this globe. The work honors the role of cuisine and cooking in cultural cohesion and expression among communities and identities,  even when individuals and families relocate locally, nationally or internationally.

‘Eternal Flame’ is designed to recognize the importance of dialogue and exchange. With this in mind, the artist is producing a series of videos featuring local and distant chefs preparing recipes and relating stories on each dish’s significance. Ramírez Jonas imagines cooking culture as a symbolic eternal flame, enduring in communities for generations, over vast distances.

Artist Paul Ramírez Jonas’ ‘Eternal Flame’ grills are open for public use during the Park’s open hours, which are ever day from 9am to sunset. There is no reservation system, instead the grills are available on a first-come, first-served basis. Grillers must properly dispose of used charcoal in the labeled metal containers in the grilling area. All other barbecue-related waste can be disposed of in the Park’s trash bins, or if it is compostable – in the compost bins. Please note: there is no alcohol allowed at the Park.

See artist Paul Ramírez Jonas’ ‘Eternal Flame’ monument installation activated by five Queens, New York-based chefs in this documentary short by film-makers RAVA (Ava Wiland and Rafael Salazar). As the chefs cook delicious recipes from around the world, they share their thoughts on cuisine as an enduring touchstone of culture and heritage.

Virtual Conversation: After the Monument

The talk focused on two of Ramirez Jonas’s public art works: ‘Eternal Flame’ at Socrates and ‘Public Trust’ at moCa Cleveland. The speakers will address public space as contested ground, civic participation, and the role of monuments in the contemporary culture war.

Courtenay Finn is currently the Chief Curator at the Museum of Contemporary Art Cleveland (moCa). Prior to her appointment at moCa in 2019, she was Senior Curator at the Aspen Art Museum (AAM) where she organized thematic exhibitions such as Lost Without Your Rhythm, Gravity & Grace, and The Revolution Will Not Be Gray; as well as solo exhibitions of Margaret Kilgallen, Yto Barrada, Haris Epaminonda, Mickalene Thomas, Anna Sew Hoy, and Alice Channer. From 2011-2014 she was the curator at Art in General where she commissioned new work by Letha Wilson, robbinschilds, Katrin Sigurdardottir, and Mounira Al Solh. In 2013 she was the co-curator of North by Northeast, the Latvian Pavilion for the 55th edition of the Venice Biennale.

Kendal Henry is an artist and curator who lives in New York City and specializes in the field of public art for over 30 years. He illustrates that public art can be used as a tool for social engagement, civic pride and economic development through the projects and programs he’s initiated in the US and internationally.

He’s currently the Director of NYC’s Department of Cultural Affairs Percent for Art Program and an adjunct professor at New York University’s Steinhardt School of Culture, Education and Human Development. A guest lecturer at various universities and educational institutions including Rhode Island School of Design Senior Studio; and Pratt Institute’s Arts and Cultural Management Program. Kendal served as the Director of Culture and Economic Development for the City of Newburgh, NY where he created the region’s first Percent for Art Program. Prior to that post he was Manager of Arts Programs at the Metropolitan Transportation Authority (MTA) Arts for Transit for eleven years. During this time, he has overseen the commissioning, fabrication and installation of MTA’s permanent art projects, served as a member of the MTA’s in-house design team, and produced temporary exhibitions at Grand Central Terminal.

Kendal was also the Curator-at-large at the Museum of Contemporary African Diaspora Art (MoCADA) in Brooklyn, NY and was elected to serve two 3-year terms on the Americans for the Arts Public Art Network Council.

‘Eternal Flame’ was highlighted in a “Critic’s Pick” review by Jillian Steinhauer in the New York Times online on September 17, 2020 and in print on September 18, 2020:

“With ‘Eternal Flame,’ Mr. Ramírez Jonas has rethought the traditional social dynamics of a monument. Instead of imposing a narrative on passers-by, the sculpture invites, even requires, activation by viewers. Its overarching statement is that cooking is a uniting force and a vital cultural constant — a truism of sorts that becomes beautifully specific and meaningful only when people bring their recipes and experiences to the table (or, in this case, grill). And by being displayed in Queens, the most ethnically diverse urban area in the world, the work also turns into a celebration of immigrant communities and of living together in difference…”

Paul Ramírez Jonas was born in Pomona, California in 1965 and raised in Honduras. Educated at Brown University (BA, 1987) and Rhode Island School of Design (MFA, 1989), Ramírez Jonas, currently lives and works in Brooklyn. Over the last twenty-five years Ramírez Jonas has created works that range from large-scale public installations and monumental sculptures to intimate drawings, performances and videos. Through his practice he seeks to challenge definitions of art and the public, engineering active audience participation and exchange. For example, his 2010 Creative Time project, ‘Key to the City,’ involved 20,000 participants and centered around a key as a vehicle for exploring social contracts pertaining to trust, access, and belonging. He is currently an Associate Professor at Hunter College and is represented Galeria Nara Roesler.