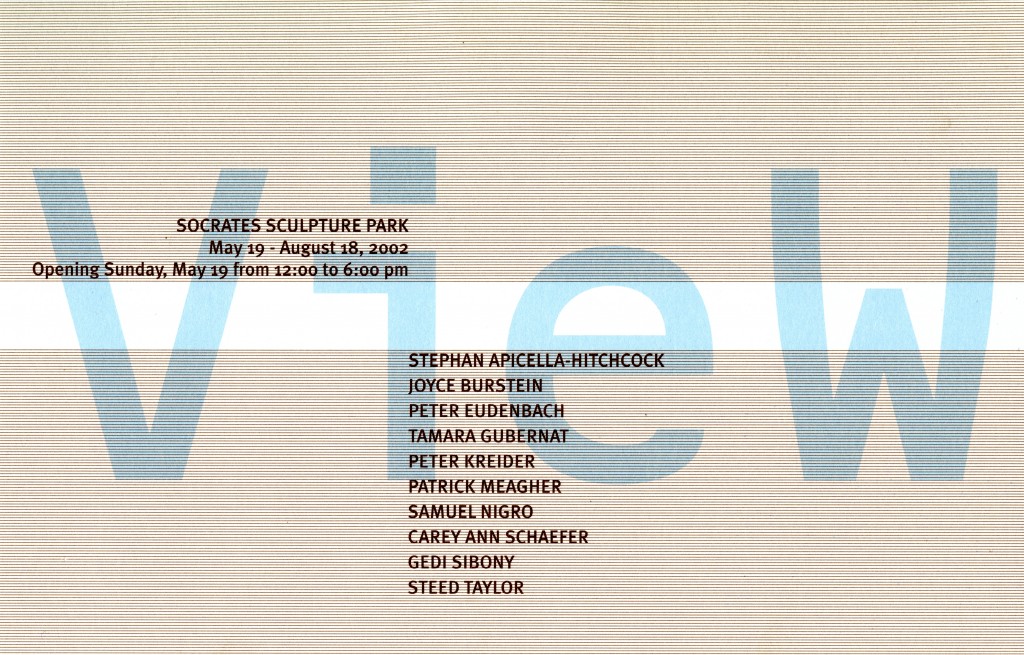 Socrates Sculpture Park will open its 2002 exhibition season with a show featuring ten newly commissioned works: Stephen Apicella-Hitchcok is building a wooden pavilion based on the structure of a roach trap. Joyce Burstein is presenting an edition of her ongoing epitaph project that invites viewers to write in chalk on a slate tombstone. Pater Eudenbach has created a sculpture based on an optical devise pictured in a Durer engraving. Tamara Gubernat has made five iconic flags symbolizing the freedoms guaranteed in the first amendment. Peter Kreider has laid down a small scale, highly detailed highway that references both traditional garden labyrinths and the earthworks of the 1970s. Patrick Meagher’s installation traverses the entire park with lines of cable and EPP foam that make crossing trajectories through the air. Samuel Nigro will present the first two phases on his ongoing manipulation and documentation of a monumental piece of granite, including a performance on the day of the opening. Carey Ann Schaefer has silver leafed areas of the chain link fence that surrounds the Park, transforming it into a shimmering, ephemeral, and unexpectedly beautiful presence. Gedi Sibony has created a sequence of objects, including a ladder hung from a crane and a transplanted tree with a shadow of brick that serve as symbols of life in New York City. Steed Taylor is painting the road — the skin of the community — with a tattoo in honor of grandparents of Long Island City High School students. Also currently on exhibit are two recently completed stainless steel sculptures by Joel Graesser and a billboard by Miles Coolidge that is a large-scale reproduction of a 1909 hand-tinted novelty postcard of The Serpent Mound in Ohio.