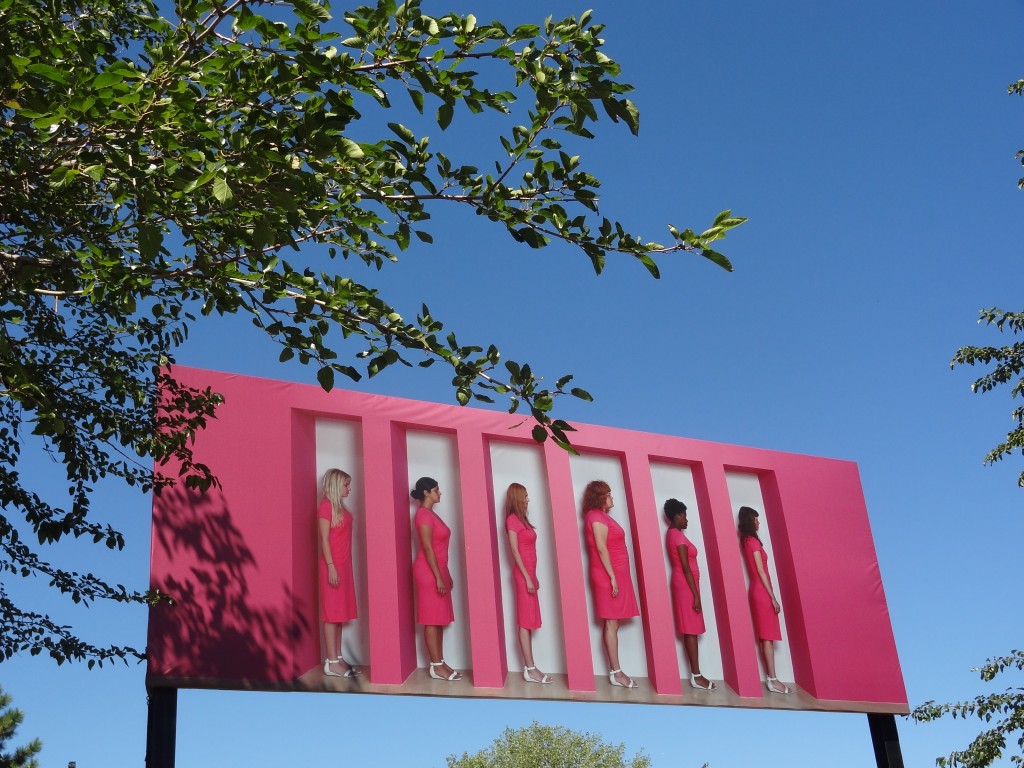 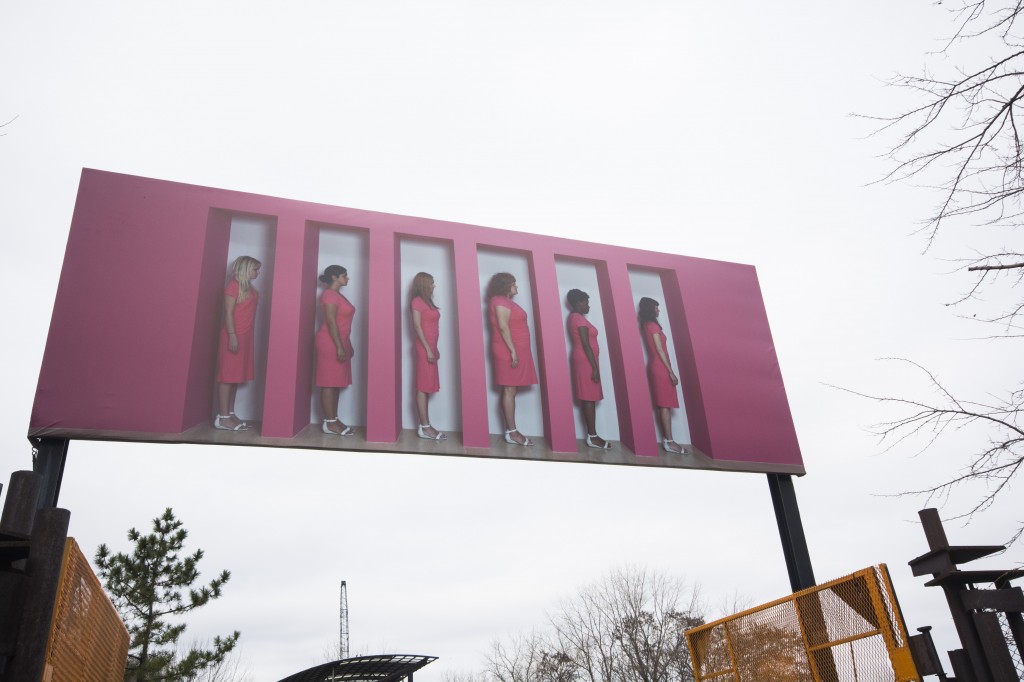 ABOUT THE CURRENT BROADWAY BILLBOARD

Wall Bearer by artist Kate Gilmore is the newest installment of the park’s ongoing “Broadway Billboard” series, through which Socrates Sculpture Park commissions artists to create a billboard image that spans the main entrance of the park and offers a unique platform for exhibiting two-dimensional media. At least twice annually (spring and fall), Socrates installs a new work on the 11′ x 28′ billboard, which can be seen nearly a mile away on Broadway in Long Island City.

Kate Gilmore’s sculptural and performance-based works raise questions about feminine identity and contemporary power dynamics. Wall Bearer, the park’s current Broadway Billboard, is documentation from the eponymous performance at The Weatherspoon Art Museum in Greensboro North Carolina in 2011. For that project, six performers, dressed in identical pink outfits, stood in individual alcoves within a matching pink wall.  The performers, all women, stood perfectly still for three hour stretches, during which time visitors to the exhibition could walk through the space, viewing the performance as a still-life or a sculpture to be briefly admired.

In Wall Bearer, the live female body is transformed into a sculptural element, referencing 1970’s performance art and later feminist artworks.  Here Gilmore presents a parade of pink and a rotating cast of all-female performers. The pink’s Pepto-Bismol-like hue borders on saccharine and feels imposed and thus unattractively burdensome for each woman. Camouflaged, anonymous, and uncomfortable, each woman may be a column of support and essential to the overall tableau, but she is also easily overlooked, suggesting that there is more than a physical wall to be overcome.

Gilmore received her BA in from Bates College and her MFA from School of Visual Arts. Her work has been shown nationally and internationally at such institutions as MoCA Cleveland, the 2010 Whitney Biennial, Whitney Museum of American Art, the Brooklyn Museum, PS1/MoMA, The Kitchen, Indianapolis Museum of Art, Public Art Fund Project (Bryant Park), Parasol Unit (London), Istanbul Museum of Art, Haifa Museum of Art, Israel, J. Paul Getty Museum, California, San Francisco Museum of Modern Art, and Museum of Contemporary Art (Chicago). She is the recipient of the Rome Prize from the American Academy in Rome, the Louis Comfort Tiffany Biennial Award, the Lower Manhattan Cultural Council Award for Artistic Excellence, the Franklin Furnace Fund for Performance, the LMCC Workspace Residency, the Art Matters Award, the New York Foundation for The Arts Fellowship, the Rauschenberg Residency Award, and the Marie Walsh Sharpe Space Residency. Her work is in the collection of the Museum of Modern Art, New York, the Brooklyn Museum, Whitney Museum of American Art, Museum of Fine Arts, Boston, San Francisco Museum of Modern Art, Indianapolis Museum of Art, and Museum of Contemporary Art, Chicago.

Wall Bearer at Socrates Sculpture Park is Courtesy of the Artist and
David Castillo Gallery.