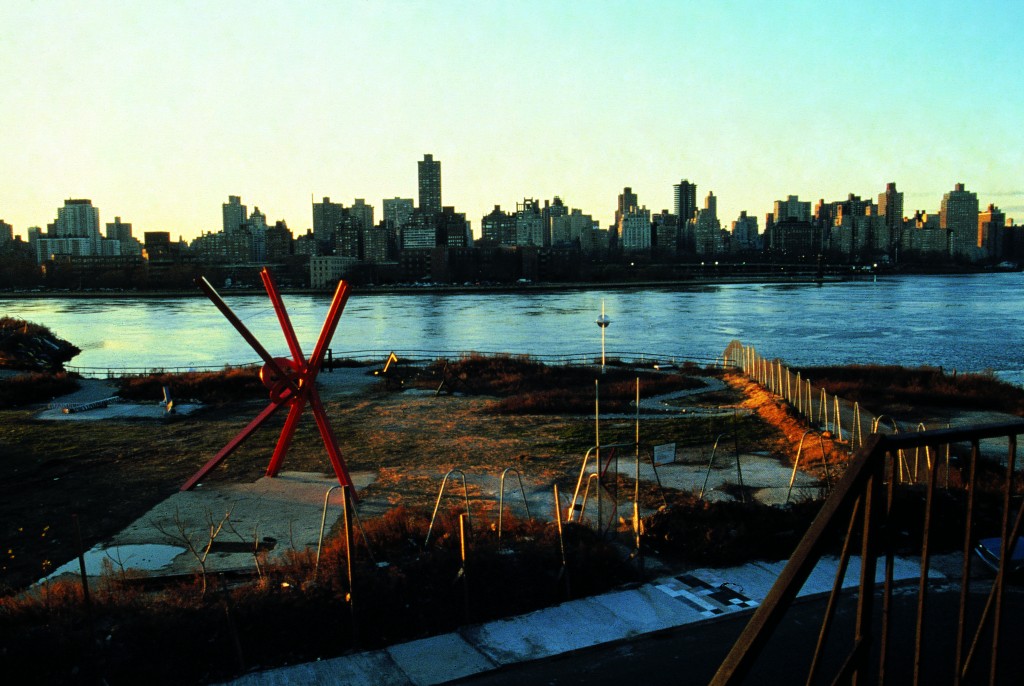 In 1986, visionary sculptor Mark di Suvero founded Socrates Sculpture Park as a community-engaged and accessible arts space dedicated to supporting artists in the production and presentation of public artworks. Socrates was designated as a New York City public park in 1998, ensuring the land would be protected for generations to come. Today the Park is firmly established as cultural anchor in Queens, producing topical exhibitions of contemporary public art and offering robust programming that intimately engage the five-acre waterfront landscape and diverse audiences.

The Park is committed to serving artists – from early-career to international renown – by providing an open platform for public art and encouraging unfettered ambition in scale and subject matter. The vast majority of artworks exhibited at Socrates are built on-site in the outdoor artist studio space. This gives Park  visitors the unique opportunity to witness the often labor-intensive art-making process. The Park also remains open to the public during exhibition installation and de-installation.

Socrates does not have a permanent collection and all artworks are temporarily on view. An archive of every exhibition at the Park is available HERE and a searchable archive of over 1,000 Socrates artists is available HERE. Additionally, you can browse a digital library of exhibition catalogues and publications HERE.

The Park engages internationally recognized artists for solo or group presentations during the spring and summer months each year. In recent years, we have commissioned major projects from acclaimed artists including Jeffrey Gibson, Virginia Overton, Nari Ward, Agnes Denes, and Meg Webster.

Every year, a jury selects a group of artists for ‘The Socrates Annual’ fellowship through a competitive open-call application process. Artists including Sable Elyse Smith (2016), David Brooks (2009), Hank Willis Thomas (2006), Orly Genger (2004), and Sanford Biggers (2001) have participated in the fellowship program since it was formalized in 2000.

Artist Fellows are each awarded a production stipend, access to the Park’s outdoor artist studio, as well as the technical and administrative support needed to realize ambitious public art projects. The fellowship traditionally culminates in the fall with ‘The Socrates Annual’ exhibition, which showcases the Fellows’ diverse artistic approaches, mediums, and subject matters –comprising a compelling survey of contemporary art practices.

View the application for ‘The Socrates Annual’ fellowship and exhibition program. And stay up-to-date with important info including deadlines by signing up for the Park’s newsletter and following Socrates on Facebook, Instagram, and Twitter.


School Studio, ‘Objects In Mirror Are Closer Than They Appear,’ 2019. Photo: Sara Morgan

Folly/Function is the Park’s architectural and design competition in partnership with The Architectural League of New York. The program launched in 2012 to investigate the intersection between sculpture and architecture through the conceptual framework of “follies”— temporary structures that intentionally serve no practical purpose. The program has evolved to fuse form with utility and now addresses structural needs within the Park.

Winners of the Folly/Function competition are awarded a production grant, access to the Park’s outdoor studio, as well as administrative and technical support from Socrates and The League. Finished Folly/Function projects traditionally go on view at the Park over the summer months.

*The Folly/Function program went on hiatus in 2020

Since 1999, Socrates has activated the billboard above the main entrance to the Park with an ongoing series of artworks commissioned from established artists including John Giorno, Douglas Gordon, Michael Joo, Los Angeles Urban Rangers, Wangechi Mutu, Chitra Ganesh, and Duke Riley. In response to the 2016 presidential election, Socrates held an open-call competition for the Broadway Billboard on the topics of democracy and American identity. The winning proposals were ‘Welcome’ by Guillaume Légaré and ‘Word on the Street: Love Not Hatred’ by Amy Khoshbin & Anne Carson.