Cloudy and 75° in Queens

Cloudy and 75° in Queens The background color of this website changes based on current sky conditions in New York City.

In this turbulent moment when we find ourselves reevaluating American identity and values, the MONUMENTS NOW exhibition at Socrates Sculpture Park seeks to address the role of monuments in society and commemorate underrepresented narratives such as diasporic, Indigenous, and queer histories.

In response to MONUMENTS NOW, the Park’s Broadway Billboard will also feature a monuments-related artwork by artist Nona Faustine. Furthermore, in acknowledgment of how monuments are shaped by society as well as by artists, the public is invited to share their reactions on-site and online over the course of the exhibition.

The exhibition will be documented in an artist-focused publication made possible by the Henry Luce Foundation. 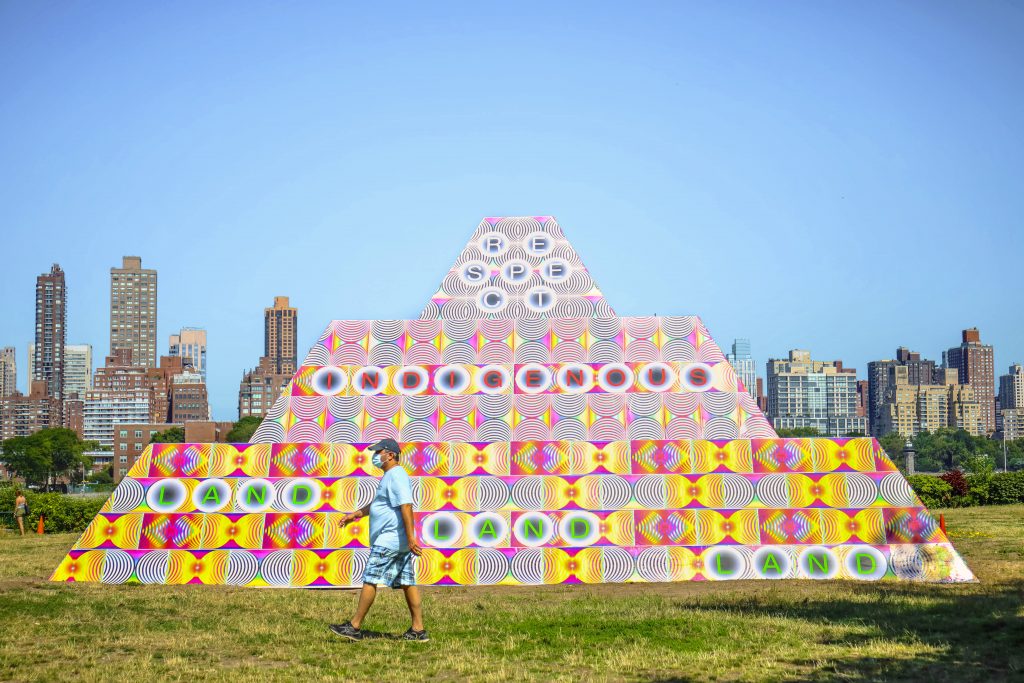 Artist Jeffrey Gibson—a recipient of a 2019 MacArthur Foundation “Genius Grant”—will present a monument to inclusion and diversity: Because Once You Enter My House, It Becomes Our House. Drawing from Indigenous Mississippian culture, architecture, activist graphic traditions, and queer performative strategies, the large-scale public sculpture projects a future vision of the world that embraces complexities within collective identity.

Paul Ramírez Jonas imagines his Eternal Flame monument as a communal grill. The form honors the role of cuisine and cooking in cultural cohesion and expression among immigrant communities and identities. Eternal Flame is designed to invite dialogue and exchange. 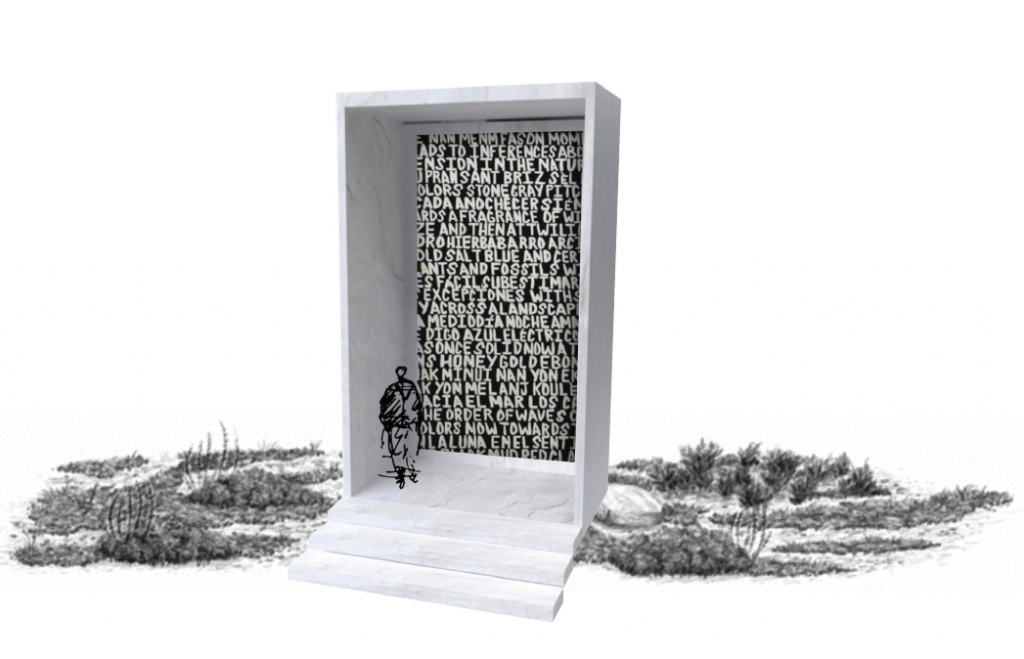 Xaviera Simmons’ contribution, The structure the labor the foundation the escape the pause, is composed of sculptural forms – each baring landscapes of text culled from historical documents foundational to racial disenfranchisement in the United States. The works are a monument to promises denied, offering insight into governmental policies that continue to shape the racial caste system we live within presently.

Rendering of The structure the labor the foundation the escape the pause, 2020. Courtesy of the artist and David Castillo Gallery.

CALL AND RESPONSEON VIEW FROM OCTOBER 10

For Part II of the exhibition — MONUMENTS NOW: Call and Response — the Park released an open-call for monuments. The 200+ proposals submitted through a competitive open-call were reviewed by Socrates Director, John Hatfield and Socrates Curator, Jess Wilcox, as well as two Curatorial Advisors – Aimé Iglesias-Lukin, Director and Chief Curator of Visual Arts at the Americas Society and Legacy Russell, Associate Curator at the Studio Museum in Harlem. The jury ultimately selected ten artists for The 2020 Socrates Annual artist fellowship and the MONUMENTS NOW exhibition. 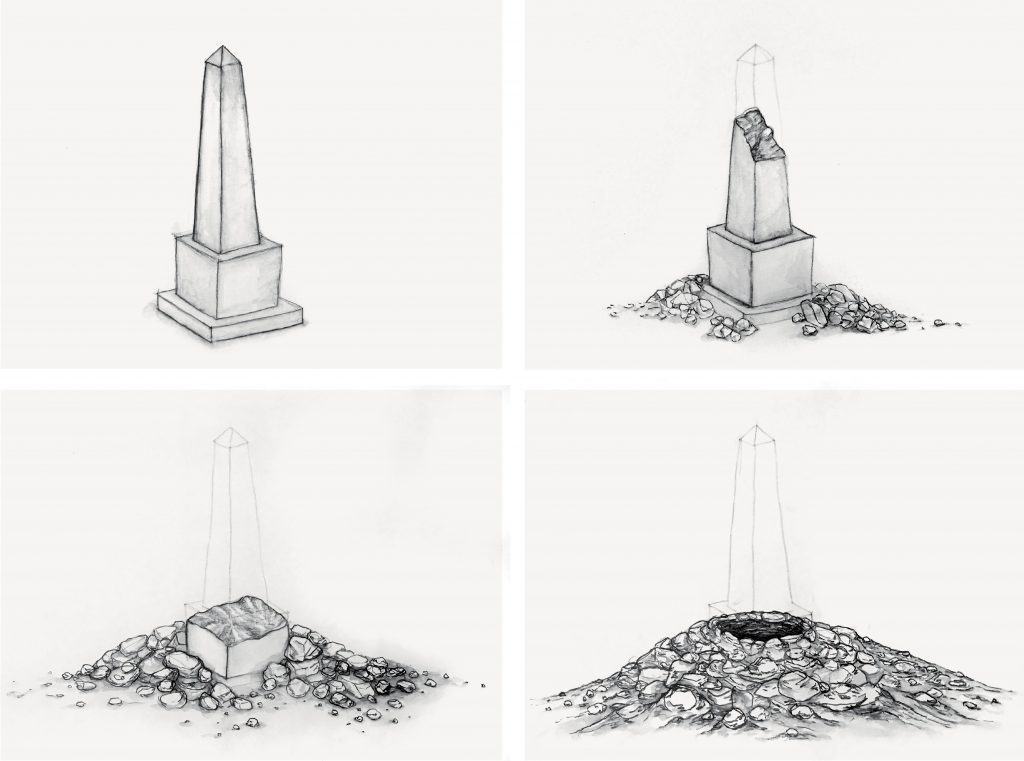 Bel Falleiros, Drawing for The America We Want, 2019, Courtesy of the Artist.

The Artist Fellows’ projects for MONUMENTS NOW: Call and Response take various archetypal monumental forms – such as the arch or the column – and dedicate them to underrepresented peoples and histories: from the civil servants who deliver fresh drinking water to the everyday struggle for self-determination by the country’s descendants of chattel slavery.

What unites these various approaches is a focus on collective agency and power, departing from the hero narrative of traditional monuments. Much of the works’ impact relies on public participation and reception by actively inviting visitors to take part in creating the meaning of the monument. 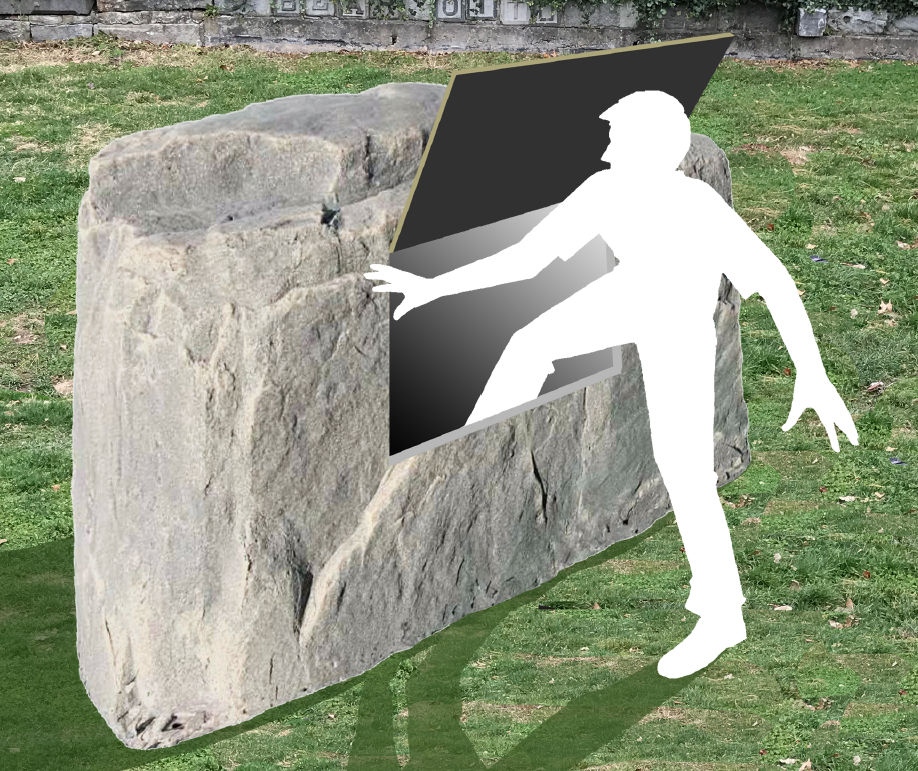 Daniel Bejar, Concept rendering for monument to immigrants, 2020. Courtesy of the artist.

THE NEXT GENERATIONON VIEW FROM OCTOBER 10

The final part of the exhibition, MONUMENTS NOW: The Next Generation, looks to the future with a multi-faceted project collectively realized by local high school students participating in the Park’s arts education program, Socrateens.

For the MONUMENTS NOW exhibition, the Socrateens collaborated on a zine titled Monuments Decoder, which you can read for free online HERE! A limited run of printed zine copies will also be publicly available on-site at the Park.

In addition, the Socrateens have a monument sculptural installation that goes on view alongside the 2020 Artist Fellows’ projects on October 10, 2020. 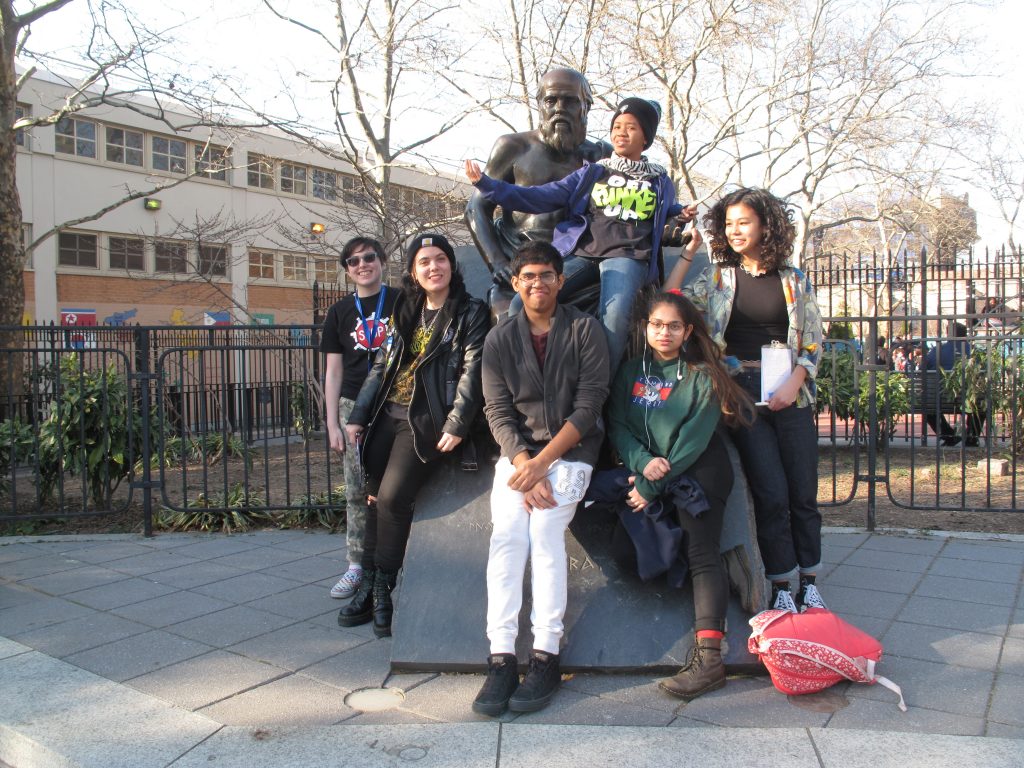 In Praise of Famous Men No More
By Nona Faustine

In conjunction with MONUMENTS NOW, the Park’s Broadway Billboard above the main entrance features artist Nona Faustine’s photographic renderings of contested American monuments – probing at the power and integrity of these symbolic icons.

In Praise of Famous Men No More by Nona Faustine.

Jeffrey Gibson
To activate his monument project, Because Once You Enter My House It Becomes our House,  Jeffrey Gibson curated a series of Indigenous artist performances. The performances, which take place on the monument structure, are live-streamed for free online. Due to the Coronavirus pandemic, the public is not permitted to attend performances on-site at the Park.

As part of the ‘MONUMENTS NOW‘ exhibition, Socrates’ Lead Educator, Douglas Paulson, has designed a program, “Let’s Talk,” to facilitate safely socially-distant conversations on the topics of monuments and public space. 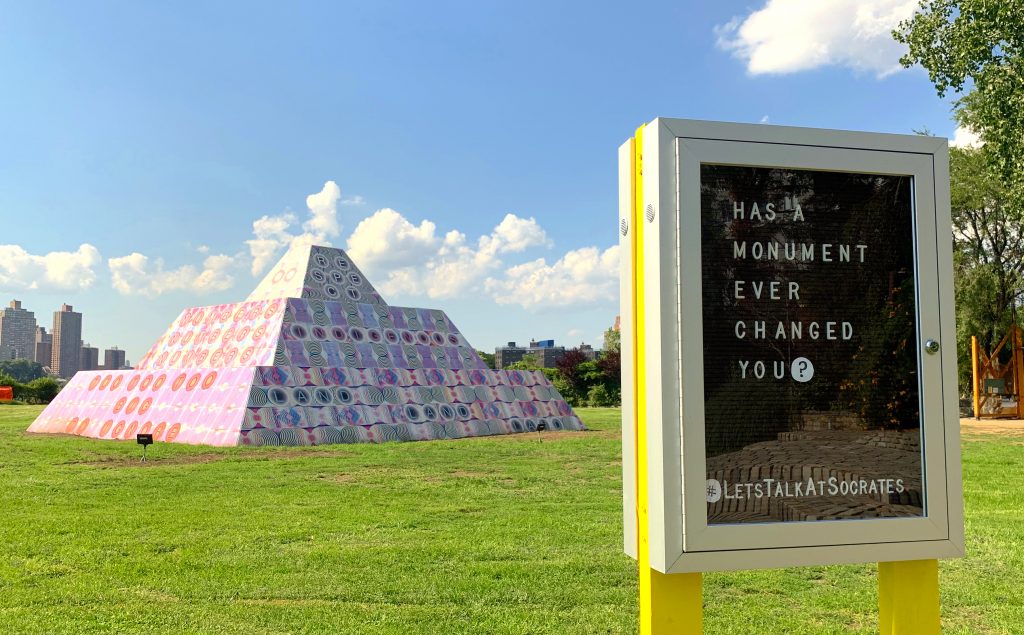 A “Let’s Talk” display board in front of Jeffrey Gibson’s project ‘Because Once You Enter My House It Becomes Our House.’ Image by Sara Morgan.

Socrates programs are also supported, in part, by public funds from Queens Borough President Melinda R. Katz; the NYC Department of Cultural Affairs, in partnership with the City Council and Jimmy Van Bramer, the New York State Council on the Arts, a state agency; and the National Endowment for the Arts.