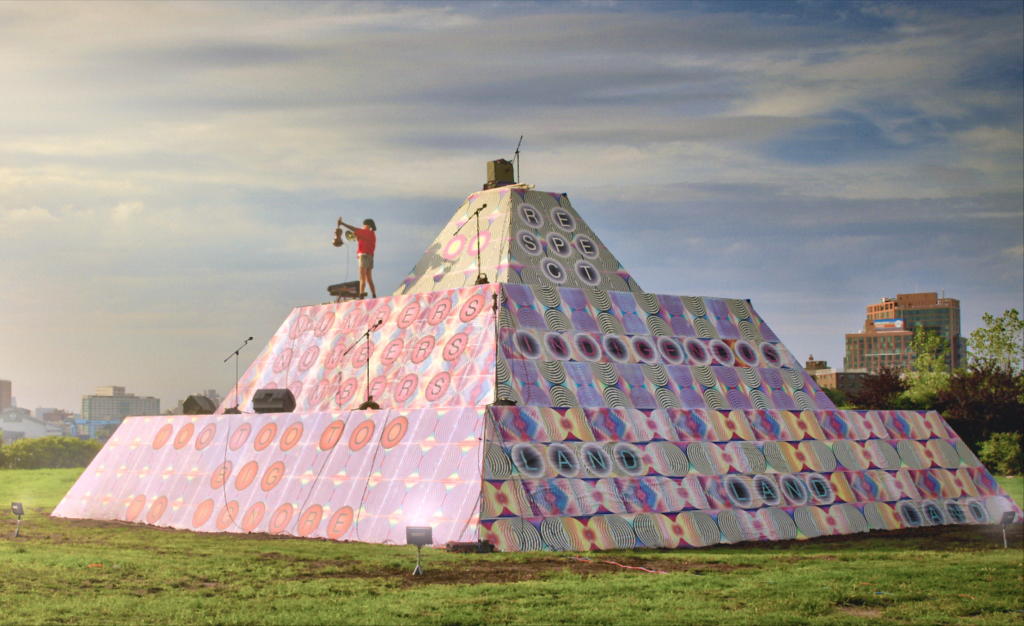 Laura Ortman performing atop ‘Because Once You Enter My House It Becomes Our House’ by Jeffrey Gibson, Image by KMDeco Creative Solutions: Mark DiConzo.

Taylor R. Payer: Tell me about yourself.

Laura Ortman: I’ve been in New York for 23 years. I am a visual artist; composer; musician; improvisor; and a licensed New York City hair stylist as my day job – which I really love because it’s still good to work with my hands and work with textures and color and not be like the lone artist, which is what I do the rest of the week. I live in Prospect Heights, Brooklyn. Same apartment for 23 years. And originally I’m from Whiteriver, Arizona on the White Mountain Apache reservation. I grew up near St. Louis along the Mississippi River.

Taylor Rose Payer is a 2020 ArtTable Fellow with Socrates Sculpture Park. Drawn to the places where art and politics meet, she has worked as a curator, educator, and arts administrator. Born and raised on the Turtle Mountain Band of Chippewa Reservation, Taylor received her BA from Dartmouth College and MA from Brown University.

Programming for Jeffrey Gibson‘s ‘Because Once You Enter My House It Becomes Our House‘ is made possible by generous support from VIA Art Fund; Roberts Projects, Los Angeles; Kavi Gupta, Chicago; and Sikkema Jenkins & Co., New York. It is also made possible with funds from the NYSCA Electronic Media/Film in Partnership with Wave Farm: Media Arts Assistance Fund, with the support of Governor Andrew Cuomo and the New York State Legislature.