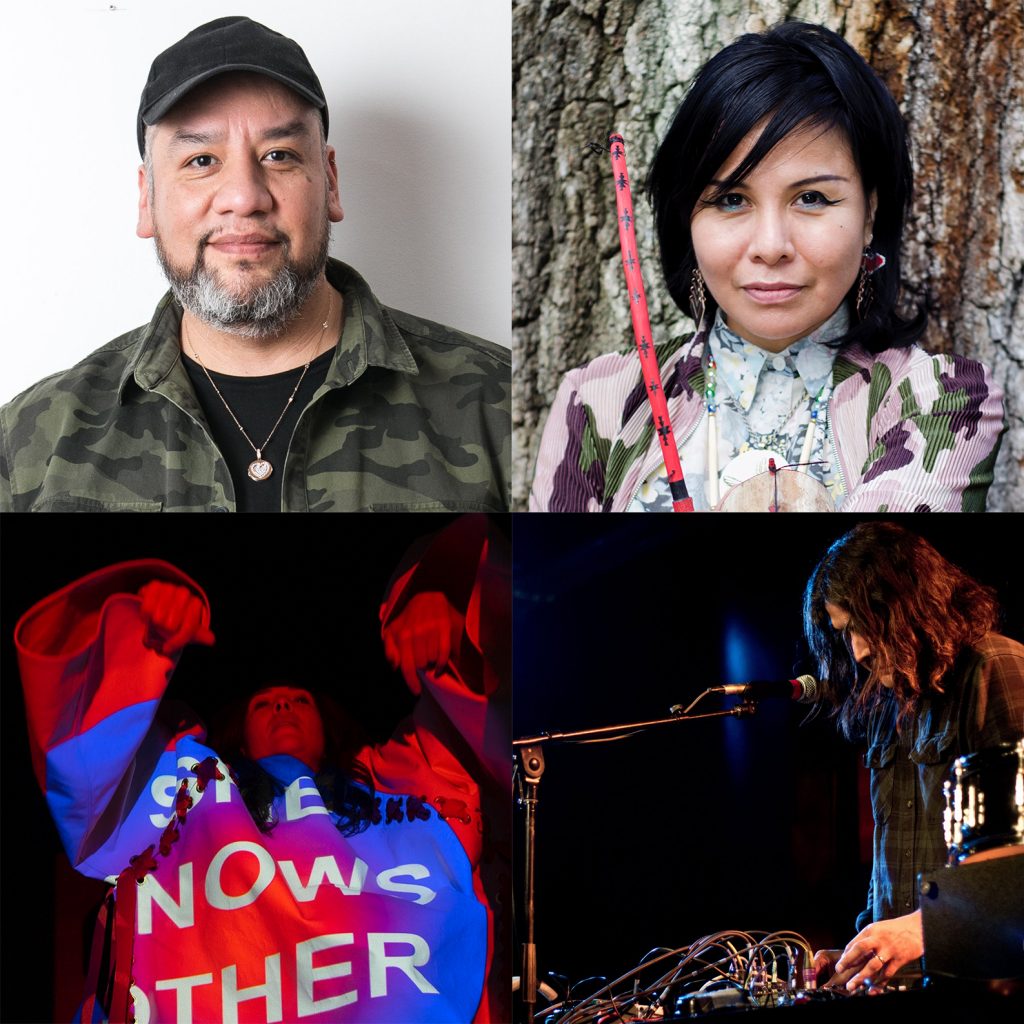 The second live-streamed online conversation of the Jeffrey Gibson Screening Series features the artist in conversation with the three Indigenous creatives he collaborated with to activate his monument sculpture ‘Because Once You Enter My House It Becomes Our House:’ Laura Ortman, Emily Johnson, and Raven Chacon.

Of the three, Gibson said “I knew immediately that I wanted to work with Laura, Emily, and Raven on programming for ‘Because Once You Enter My House It Becomes Our House.” He continued “They are all established artists in their own right, and I have so much respect for how they each use process-based work to extend cultural philosophies in new ways.”

The discussion will be moderated by Socrates’ Curatorial Assistant, danilo machado and include time for questions from the audience.

She has performed at The Whitney Museum of American Art and The Museum of Modern Art in New York, The Toronto Biennial in Ontario, the Musée d’Art Contemporain de Montréal, and the Centre Pompidou, Paris, among countless established and DIY venues in the US, Canada, and Europe. In 2008 Ortman founded the Coast Orchestra, an all-Native American orchestral ensemble that performed a live soundtrack to Edward Curtis’s film In the Land of the Head Hunters (1914), the first silent feature film to star an all-Native American cast.

Ortman is the recipient of the 2020 Jerome@Camargo Residency, 2017 Jerome Foundation Fellowship, the 2016 Art Matters Grant, the 2016 Native Arts and Culture Foundation Fellowship, the 2015 IAIA’s Museum of Contemporary Native Arts Social Engagement Residency and the 2014-15 Rauschenberg Residency. She was also a participating artist in the 2019 Whitney Biennial. Ortman lives in Brooklyn, New York.

Emily Johnson is an artist who makes body-based work. She is a land and water protector and an activist for justice, sovereignty and well-being. A Bessie Award-winning choreographer, Guggenheim Fellow and recipient of the Doris Duke Artist Award, she is based in New York City. Originally from Alaska, Emily is of the Yup’ik Nation, and since 1998 has created work that considers the experience of sensing and seeing performance. Her dances function as portals and installations, engaging audiences within and through space, time, and environment—interacting with a place’s architecture, peoples, history and role in community.

Her choreography and gatherings have been presented across the United States and Australia. Recently she choreographed the Santa Fe Opera production of ‘Doctor Atomic.’ Her large-scale project, ‘Then a Cunning Voice and A Night We Spend Gazing at Stars’ premiered in Lenapehoking (NYC) in 2017, and was presented in Chicagou (Chicago) in 2019. Her new work in development, ‘Being Future Being,’ considers future creation stories and present joy.

Emily’s writing has been published and commissioned by ArtsLink Australia, unMagazine, Dance Research Journal (University of Cambridge Press); SFMOMA; Transmotion Journal, University of Kent; Movement Research Journal; Pew Center for Arts and Heritage; and the compilation Imagined Theaters (Routledge). She was an advisory committee member for Creative Time’s 10th Anniversary Summit and a Phase One working group member of Creating New Futures. She serves on the advisory committee for Advancing Indigenous Performance Initiative of Western Arts Alliance, The Center for Imagination in the Borderlands and the Native American Arts Program Expansion Committee for Idyllwild Arts. Emily is the Pueblo Arts Collaborative Diplomat at Santa Fe Opera, and a lead organiser of First Nations Dialogues. Emily hosts monthly ceremonial fires on the Lower East Side of Mannahatta in partnership with Abrons Arts Center. She is part of a US based advisory group developing a Global First Nations Performance Network.

Raven Chacon is a composer, performer and installation artist from Fort Defiance, Navajo Nation. As a solo artist, collaborator, or with Postcommodity, Chacon has exhibited or performed at Whitney Biennial, documenta 14, REDCAT, Musée d’art Contemporain de Montréal, San Francisco Electronic Music Festival, Chaco Canyon, Ende Tymes Festival, 18th Biennale of Sydney, and The Kennedy Center. Every year, he teaches 20 students to write string quartets for the Native American Composer Apprenticeship Project (NACAP). He is the recipient of the United States Artists fellowship in Music, The Creative Capital award in Visual Arts, The Native Arts and Cultures Foundation artist fellowship, and the American Academy’s Berlin Prize for Music Composition. He lives in Albuquerque, NM.

danilo machado is a poet, curator, and public programmer living on occupied land. Interested in language’s potential for revealing tenderness, erasure, and relationships to power, danilo is the curator of the exhibitions ‘Otherwise Obscured: Erasure in Body and Text’ (Franklin Street Works, 2019-20) and ‘support structures’ (The 8th Floor Gallery/Virtual, 2020-21). A 2020-21 Poetry Project Emerge-Surface-Be Fellow, their writing has been featured in Hyperallergic, Brooklyn Rail, ArtCritical, TAYO Literary Magazine, among others. danilo is the co-founder and co-curator of the reading series Maracuyá Peach and the chapbook/broadside fundraiser already felt: poems in revolt & bounty. They are working to show up with care for their communities.