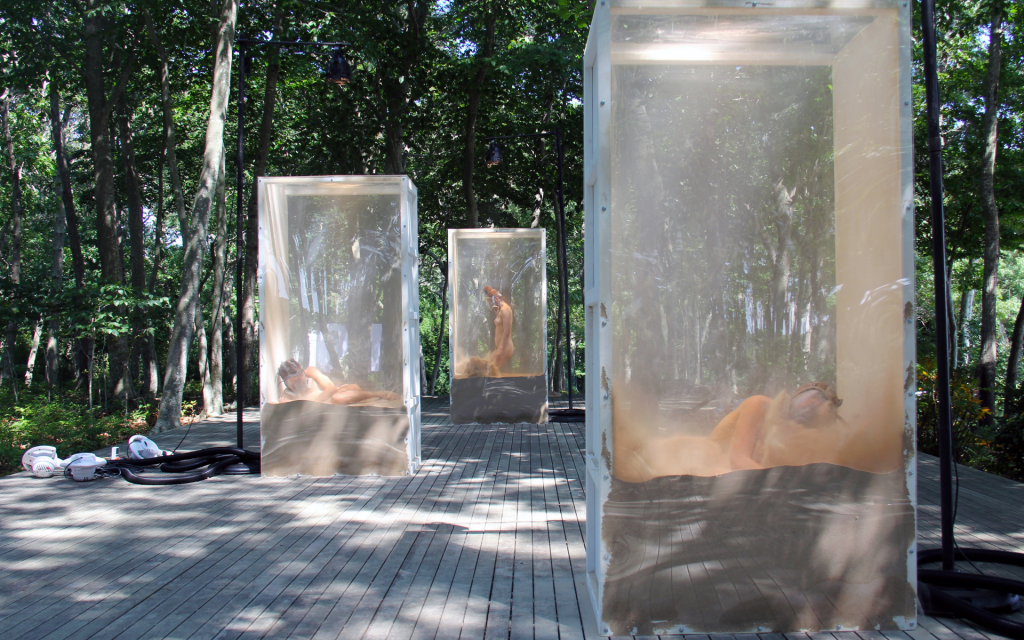 Conceived by multidisciplinary artist duo Ximena Garnica & Shige Moriya and performed by the LEIMAY Ensemble, ‘Correspondences’ is a sculpture installation and performance that engages with questions of being, interdependence, and coexistence.

In ‘Correspondences,’ individual performers wearing gas masks are enclosed inside transparent chambers partially filled with sand. As the performers repeatedly try to stand atop the sand, machines attached to the chambers intermittently trigger a blast of sand causing the performers to sink back down to the ground. The sand blasts continuously occur in the chambers, even in the absence of a performer.

‘Correspondences’ is intended as a poetic microcosm in which performers, observers, machines, and natural elements of the Park can mingle in new and unexpected ways. Some of the generative questions informing the work include: How do we cope with uncertainty? What happens to our bodies when we encounter the unknown? And how are we reshaping environmental ethics?

Contribute to the ‘Correspondences’ interactive archive by using this online form to submit responses to any or all of the artists’ questions relating to the work as well as to share your own photos and videos of the project. You can also learn more and support LEIMAY through an on-demand viewing of ‘Correspondences’ shot at Astor Place in 2020.

About Ximena Garnica and Shige Moriya

Ximena Garnica and Shige Moriya are a Colombian and Japanese artist duo working in the visual and performing arts fields as multidisciplinary artists, directors, choreographers, curators, and teachers. Their collaborative works include performances, sculptural, video, mixed-media, and light installations as well as photography and film projects. Ximena and Shige also invest their energy in critical research, printed and digital publications, educational activities and community projects.

Their work is rooted in questions of being, perception, interdependency, and coexistence. They look to expose the multiplicity of spatial and temporal intervals that exist within the body, between materials and environments. They are curious about what emerges when the stability of habits, affirmation of binaries, social norm expectations, and the crystallization of identity dissolve and expose the potentialities of being.

They have been nominated for the USA Artists Fellowship and the Herb Alpert Award. They have been part of the Bessie Schonberg Individual Choreographers Residency at the Yard, and the Watermill Center Residency Program. Currently they are part of the HERE Artist Residency Program. Ximena was a recipient of the Van Lier Fellowship for extraordinary stage directors, and she was a Distinguished Visiting Professor at the University of California Riverside 2018-2019. Her article ‘LEIMAY, CAVE, and the New York Butoh Festival’ was recently published in The Routledge Companion to Butoh Performance. She is a guest faculty member at MIT (2021) and Sarah Lawrence (2022).

Ximena and Shige are advocates of affordable live-work spaces and their work (2014-2019) was instrumental in affecting changes at the NY State level to protect live-work spaces in New York City.

Ximena Garnica and Shige Moriya are the co-founders and co-artistic directors of the arts organization LEIMAY and the LEIMAY Ensemble performance group. The word “leimay” is a Japanese term symbolizing the moment of change as in the moment between darkness and the light of dawn, or the transition from one era to the other. Their work exists in different domains, from proscenium settings to museums, galleries and outdoors in public spaces such as plazas, gardens and parks.

Their works have been presented at leading arts venues such as BAM, HERE, The Brooklyn Museum, Japan Society, The Czech Center New York, The New Museum, The Watermill Center, The Asian Museum of San Francisco, Carnegie Mellon University; and in large and small public spaces such as Times Square, NYRP Community Gardens, and NYC streets, among many other spaces in the US and abroad in Japan, Spain, France, the Netherlands, Mexico, and Colombia.

Masanori Asahara is a Japanese born dancer, choreographer and improvisation artist based in Brooklyn, New York. Masanori has been a core member of the LEIMAY Ensemble since 2010. He has toured, taught, and performed with the ensemble for over a decade.

Krystel Copper is a second-generation immigrant dance artist born to parents from Argentina and Portugal. She joined LEIMAY as a member of the performance and research ensemble in 2016 for the premiere of Frantic Beauty at BAM. Krystel holds a B.A. in Dance from the University of Maryland.

Irena Romendik is an Ukrainian visual artist based in Brooklyn for the past two decades. She has co-designed and fabricated costumes for LEIMAY’s projects for the past nine years and performed in several LEIMAY projects. She has been a LEIMAY Fellow with her own work as a visual artist collaborating with movement-based performers. She holds degrees from Shevchenko Art School in Kiev, Pratt Institute, and Tisch School of the Arts, NYU.

Jeremy D. Slater has worked with LEIMAY in several projects since 2009, creating original soundscapes for performances and installation. He is an intermedia artist working in the areas of sound, video, computer art, performance, installation, and words. Born in Reading, England and a graduate of both SUNY College at Buffalo and School of Visual Arts with an MFA in Computer Art.

The performances at Socrates mark the Queens borough premiere of ‘Correspondences,’ which is supported, in part, by the Cafe Royal Cultural Foundation, the Mertz Gilmore Foundation, the New York State Council on the Arts, and the City Department of Cultural Affairs in partnership with the City Council.

‘Correspondences’ was first developed at LEIMAY’s studio in South Williamsburg, with in-progress performances at the Watermill Center in the summer of 2019.