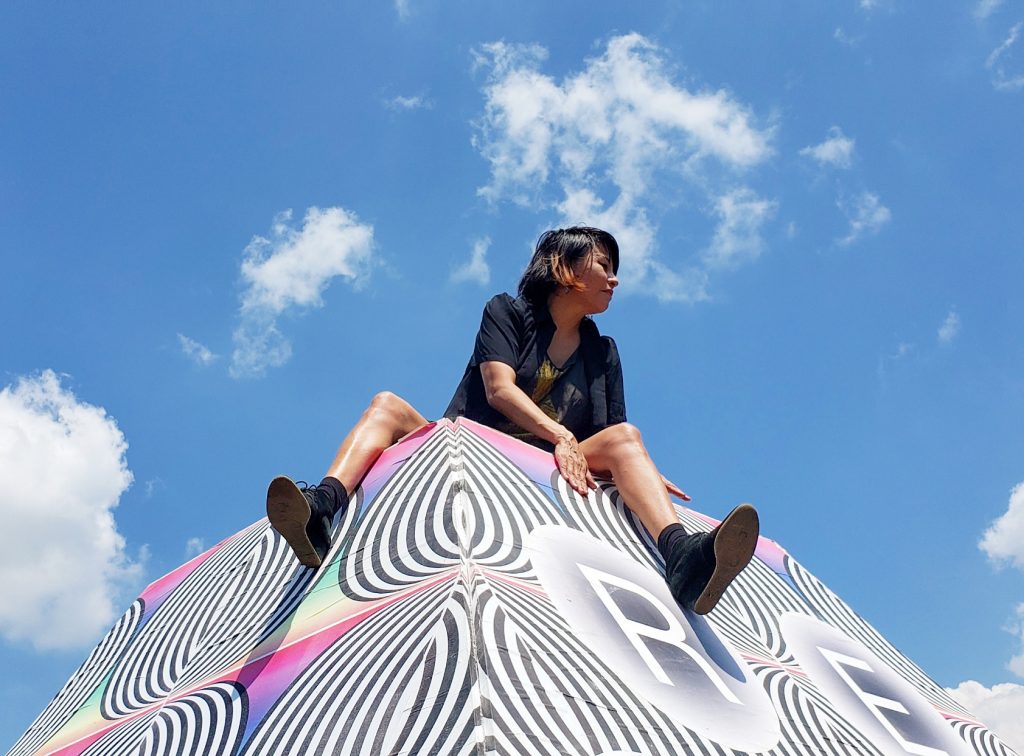 Laura Ortman atop ‘Because Once You Enter My House It Becomes Our House’ by Jeffrey Gibson, Image by Audrey Dimola.

* The event was re-scheduled for Friday, July 24 due to thunderstorms.

Please Note: The Park closes to the public at 4pm the day of the event and remains closed during the event, it can only be viewed online via Instagram & Facebook.

Artist Jeffrey Gibson (Mississippi Choctaw-Cherokee) has curated a series of performances by Indigenous artists to activate his project, ‘Because Once You Enter My House It Becomes Our House‘ for the ‘MONUMENTS NOW‘ exhibition. The series kicks off at the Online Celebration for Jeffrey Gibson’s Monument Unveiling with a Native Land Acknowledgment by Indigenous Kinship Collective and a performance by violinist Laura Ortman (White Mountain Apache) live-streamed on Instagram and Facebook. If you are able to, please support the performance by making contributions to the Indigenous Kinship Collective and the White Mountain Apache Tribe Covid-19 relief fund.

Tell me about yourself.

I’ve been in New York for 23 years. I am a visual artist; composer; musician; improvisor; and a licensed New York City hair stylist as my day job – which I really love because it’s still good to work with my hands and work with textures and color and not be like the lone artist, which is what I do the rest of the week. I live in Prospect Heights, Brooklyn. Same apartment for 23 years. And originally I’m from Whiteriver, Arizona on the White Mountain Apache reservation. I grew up near St. Louis along the Mississippi River.

Programming for Jeffrey Gibson‘s ‘Because Once You Enter My House It Becomes Our House‘ is made possible by generous support from VIA Art Fund, Roberts Projects, Los Angeles; and Sikkema Jenkins & Co., New York. It is also made possible with funds from the NYSCA Electronic Media/Film in Partnership with Wave Farm: Media Arts Assistance Fund, with the support of Governor Andrew Cuomo and the New York State Legislature.