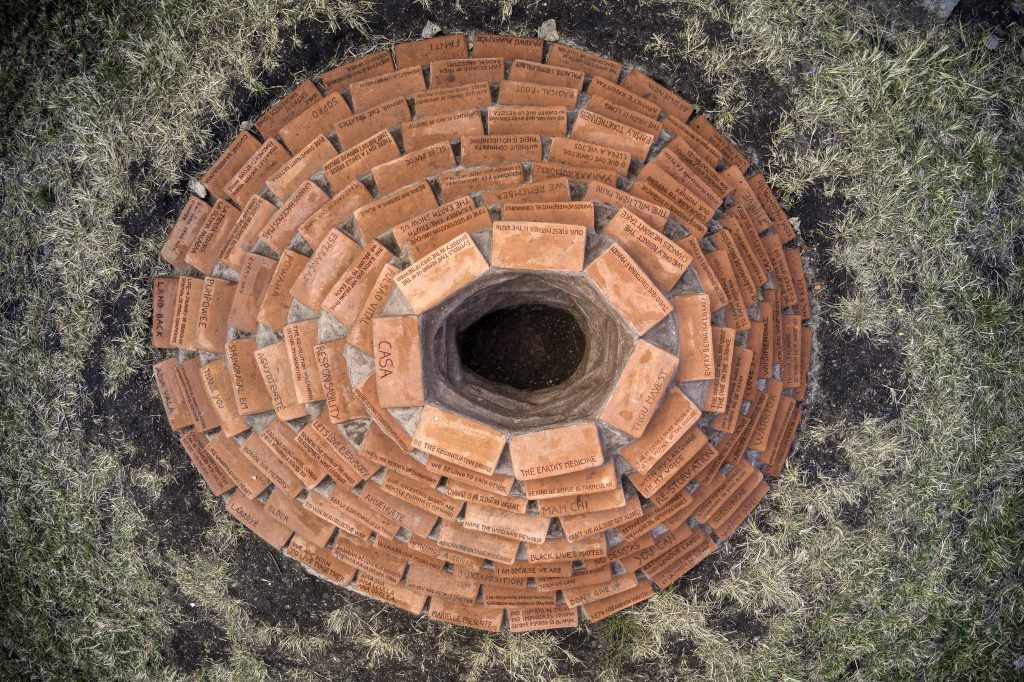 Contrasting with the phallic monuments to Columbus and other “New World” colonizers scattered across the Americas, this horizontal circle form of clay-bricks celebrates ancestral and Indigenous forms of construction that bring humans, earth, and the cosmos together. Etched in various bricks are phrases composed by Black, Latinx and Indigenous people of the Americas that touch on ideas of home, belonging, and memory.

Contribute your own text to the project HERE–>

Hello, my name is Bel Falleiros, and I’m a Brazilian artist living in NY. I would like to invite you to take a moment and look around you. The city in the background, the river, the sky, the park, the people, and finally inside you. After going through a year like 2020. What is left, still standing? What is core, essential? And what is rubble that doesn’t serve us anymore? ‘America (un)known’ is a work that was born as a reaction to the oldest monument honoring Christopher Columbus in the Americas, still standing today in Maryland. Using the same materials that this old monument was built of, the brick, the new one is proposed as its counterpart. What is our relationship with this land? What are the stories that remain unknown? The new monument was constructed as if turning the old one inside out and organizing the bricks in a more inclusive form, low and close to the ground. Each one of those bricks were made from scratch on site, engraved, one by one by hand, with much intention and care. As you walk around the piece, take a closer look at each brick, the phrases they carry, in multiple languages – over 20 in half of them are indigenous to the Americas! Every one of them comes from a different person of this continent. I invite you to take part in it: What words would your foundational brick carry?

Falleiros participated in a series of virtual programs produced by the 2020 Socrates Artist Fellows in tandem with the ‘Call and Response‘ exhibition: